Wnt/β-catenin signaling plays a crucial role in melanocyte development. Defects in Wnt1, Wnt3a or β-catenin expression inhibit melanocyte formation from the neural crest [13, 14]. Consistent with this observation, inhibition of the Wnt pathway decreases pigment cells in zebrafish [15], and Wnt signaling promotes the differentiation of neural crest cells to melanocytes in mouse [16]. The relationship between Wnt/β-catenin signaling and microphthalmia-associated transcription factor (MITF) is a critical feature in the development and pigmentation of melanocytes [17-20]. Previous work has revealed that β-catenin reduces the dendricity of melanocytes by regulation of Rho family GTPases and mitogen-activated protein kinase (MAPK) pathways [21]. However, the specific Wnt proteins that are involved in melanocyte pigmentation in adult hair follicles remain poorly defined. To date, approximately 19 unique Wnt ligands have been identified. Wnt10b is a ligand that activates canonical Wnt/β-catenin signaling [22]. Canonical Wnt/β-catenin signaling leads to the stabilization and accumulation of β-catenin, which translocates into the nucleus and activates transcription of specific targets. Previously, it has been reported that Wnt10b is related to hair follicle cycling during which it likely plays a role in the cyclic behavior of melanocytes in the hair follicle. Piul Rabbani et al. have demonstrated that expression of Wnt10b in keratinocytes activates Wnt signaling in neighboring melanocytes and that activation of Wnt/β-catenin signaling induces McSC differentiation [23].

Dct-LacZ transgenic mice were kindly provided by Prof. Ian Jackson [24]. The colony was backcrossed with C57BL/6J mice that were obtained from the Laboratory Animal Center of the Third Military Medical University, Chongqing, China. All of the protocols that involved mice were approved by the medical ethics committee of the Third Military Medical University.

The acquired skins were fixed in 4% paraformaldehyde at 4℃ for 1 h, then stained with X-gal staining solution (Beyotime, China) at room temperature for 24 h, and post-fixed overnight in 4% paraformaldehyde at 4℃. After sequential dehydration in ethanol and xylene, the skins were embedded in paraffin and sliced into 5 μm sections for immunohistochemistry. Sections were then deparaffinized, rehydrated and microwaved for antigen retrieval. After blocking endogenous peroxidase activity and non-specific biotin binding, sections were incubated with rabbit anti-Wnt10b antibody (Sigma, USA) at 4℃ overnight, and signals were detected using appropriate secondary antibodies that were conjugated with DAB (Zhongshan Golden bridge, China). After gradual dehydration, the sections were mounted with neutral gum (Zhongshan Golden bridge) and observed using a microscope.

Isolation of total RNA and RT-PCR

We harvested total RNA from mouse dorsal skin samples in different phases using Trizol (Invitrogen, USA), and we reverse transcribed the total RNA with ReverTra Ace reverse transcriptase (TOYOBO, Japan) for cDNA synthesis. Semi-quantitative PCR was performed using primers for Wnt10b and GAPDH [25]. The primers for Wnt10b were 5'-CTGCGGATGGAAGGGTAG-3' and 5'-GGGACTGAGCCAGGAACA-3'. The primers for GAPDH were 5'-ACCACAGTCCATGCCATCAC-3' and 5'-TCCACCACCCTGTTGCTGTA-3'.

iMC23 cells were seeded into 25 cm2 flasks and transfected with 2 μg DNA per flask of a Tcf4/Lef1 reporter plasmid. At 16 h after transfection, cells were replated onto 24-well plates and infected with Ad-GFP or Ad-Wnt10b 4 h after replating. At 36 h after infection, the cells were lysed, and lysates were harvested for luciferase assays with Promega's Luciferase Assay Kit (Promega, Madison, WI, USA). Each assay condition was performed in triplicate [28].

Data were presented as the means +SD from three independent experiments. All statistical analyses were performed using a t-test, and p values < 0.05 were considered to be statistically significant.

Wnt10b expression near melanocytes during the hair cycle

We used Dct-LacZ transgenic mice and X-gal staining to identify LacZ-positive melanocytes in HFs of dorsal skin sections (Fig. 1A).

Notably, in the anagen stage (P3 and P8), Wnt10b was mainly expressed in the vicinity of melanocytes in the hair bulbs. A low level of Wnt10b expression was also detected in the melanocytes themselves (Fig. 1A).

RT-PCR of Wnt10b mRNA in the dorsal skin of Dct-LacZ transgenic mice also indicated changes in Wnt10b expression during the hair cycle (Fig. 1B).

Expression of Wnt10b in hair follicles in various phases: (A) LacZ-positive melanocytes and Wnt10b-positive cells are visible at the same time in dorsal skin sections from Dct-LacZ transgenic mice at various stages. In the anagen stage (P3 and P8), Wnt10b was detected in some hair bulb melanocytes (arrows), but more Wnt10b was detected in the vicinity of melanocytes in the hair bulbs (arrowheads). At P8 (the anagen stage), Wnt10b expression increased significantly, while at P20 (the telogen stage) only a low level of Wnt10b protein was detected. Similar results were observed for LacZ levels. (B) RT-PCR was used to detect the expression of Wnt10b mRNA in the dorsal skin of Dct-LacZ transgenic mice. Scale bars represent 100 μm. 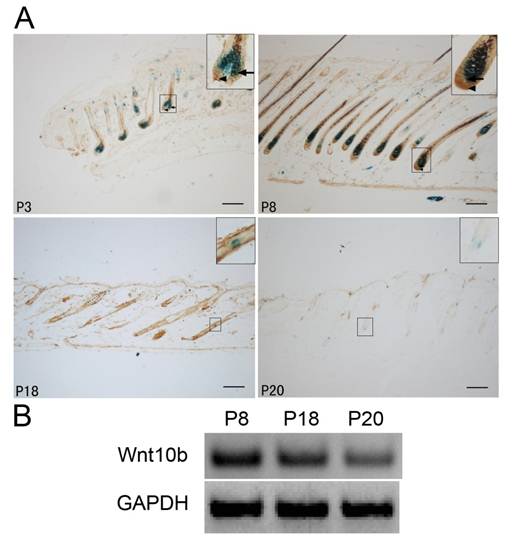 Wnt10b induces melanogenesis in the dorsal skin or whisker follicles

Whisker follicles from the Dct-LacZ transgenic mice were also treated with Ad-Wnt10b, the Ad-GFP vehicle control (Fig. 2B) or with GFP or Wnt10b protein that was harvested from JB6 cells that were treated with Ad-GFP and Ad-Wnt10b (Fig. 2C). Whole whisker follicles were stained with X-gal. Similar to the results for the HFs, LacZ-positive melanocytes were detected at higher levels in the Ad-Wnt10b-treated follicles relative to the Ad-GFP-treated follicles both through these two ways.

In conclusion, the results suggest that Wnt10b is capable of promoting melanogenesis in the dorsal skin or the whisker follicles.

Wnt10b promotes the differentiation of melanocytes in iMC23 cells

To prove that Wnt10b promotes the differentiation of melanocytes, we employed a mouse melanocyte cell line, iMC23 [26], as an in vitro cell model. IMC23 cells were infected with an Ad-GFP vehicle control or Ad-Wnt10b (Fig. 3A).

IMC23 cells that were infected with Ad-GFP or Ad-Wnt10b were harvested after 72 h. Ad-Wnt10b-infected cells displayed increased pigmentation relative to the vehicle control (Fig. 3B). This result indicates that Wnt10b promotes melanogenesis of melanocytes in vitro. Because the iMC23 cells are immature melanocytes, they are unable to synthesize melanin. However, infection with Ad-Wnt10b enabled melanin synthesis by these cells, so we infer that Wnt10b promotes iMC23 cell differentiation into mature melanocytes.

We also detected tyrosinase activity of the iMC23 cells that were infected with the Ad-GFP vehicle control or Ad-Wnt10b for 72 h (Fig. 3C). Tyrosinase is a crucial regulatory enzyme that is uniquely expressed in melanocytes and catalyzes the rate-limiting initial events in melanin synthesis. Therefore, tyrosinase activity is a marker for pigmentation and melanocyte maturation [25]. An obvious increase in tyrosinase activity was detected in the Ad-Wnt10b-infected iMC23 cells compared with the Ad-GFP-infected cells. These results provide additional evidence that Wnt10b promotes iMC23 differentiation into mature melanocytes. 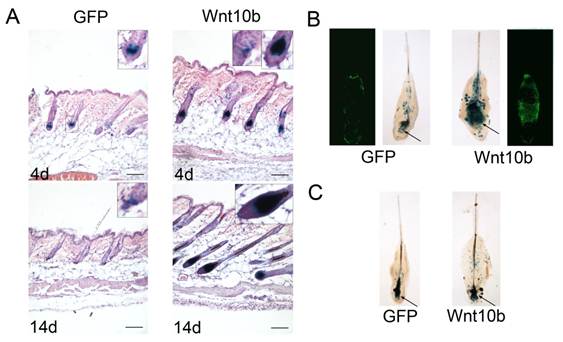 To further confirm the role of Wnt10b in melanocyte differentiation, we measured the levels of a differentiation-related protein (TRP1, tyrosinase) [9, 29-31] and GAPDH in iMC23 cells that were infected with Ad-GFP or Ad-Wnt10b by quantitative western blots (Fig. 3D, E). The blots revealed that TRP1 levels increased significantly in the Ad-Wnt10b-infected iMC23 cells compared with the Ad-GFP-infected cells. Tyrosinase exhibited less of an increase in the Ad-Wnt10b-infected cells compared with the Ad-GFP-infected cells.

These data provide compelling evidence that Wnt10b promotes the differentiation of melanocytes.

iMC23 cells were also transfected with a Tcf4/Lef1 reporter prior to infection with Ad-GFP or Ad-Wnt10b. At 36 hrs post infection, cells were collected and luciferase assays were performed (Fig. 4D). Tcf4/Lef1 reporter activity of the iMC23 cells that were infected with Ad-Wnt10b was notably increased compared with cells that were infected with Ad-GFP. Because the Tcf4/Lef1 construct reports on vital factors downstream of canonical Wnt signaling [32-35], these results demonstrate that Wnt10b activates canonical Wnt signaling in melanocytes. 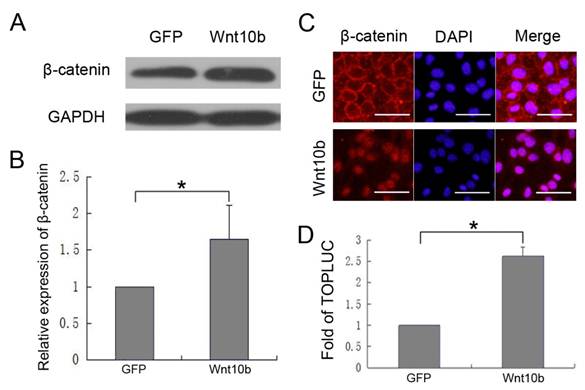 To examine the effects of Wnt10b on melanocytes, we treated the dorsal skin or whisker follicles of Dct-LacZ transgenic mice with Ad-Wnt10b. We found that Ad-Wnt10b addition promotes an increase in the number of mature melanocytes, as well as their pigmentation, in hair bulbs (Fig. 2). These results suggest that Wnt10b is capable of promoting melanocyte differentiation.

To further confirm the function of Wnt10b in melanocytes, we analyzed tyrosinase activity and melanin content in iMC23 cells, which are melanoblast-like cells that do not undergo melanogenesis. The results revealed that Wnt10b significantly increased tyrosinase activity and melanin synthesis and also up-regulated tyrosinase and TRP1 expression. These proteins function downstream in the melanin biosynthetic pathway, so the data provide additional evidence that Wnt10b promotes the differentiation of melanocytes.

Previous research has shown that suppression of the Wnt/β-catenin signaling pathway inhibits melanocyte pigmentation [39]. In addition, synthetic activation of Wnt/β-catenin signaling in embryonic skin is accompanied by epidermal hyperpigmentation [40]. Consistent with these results, we demonstrated that Wnt10b promotes the differentiation of melanocytes by activating canonical Wnt signaling in melanocytes (Fig. 4). Our results are consistent with previous studies of Wnt10b in canonical Wnt signaling of HFs [23, 36].

Human skin and mouse skin are different in that epidermal melanocytes cannot survive in mouse epidermis after the neonatal stage, but the epidermal melanocytes in human are derived from the amelanotic melanocytes in the ORS of human hair follicle, which show similar distribution patterns and cellular behaviors as mouse melanocyte stem cells [41]. Follicular repigmentation of vitiligo skin after narrow band UVB therapy and of adult Krt14-SCF transgenic mouse skin treated with Kit-blocking antibodies suggest that repigmentation of the skin starts from the orifices of hair follicles.

In fact, the effects of Wnt signaling on the proliferation and differentiation of human epidermal melanocytes have been shown in some papers. In human, high levels of DKK1 (an inhibitor of the canonical Wnt signaling pathway) secreted by fibroblasts in the dermis inhibits melanocyte growth, pigmentation, and melanosome transfer in keratinocytes induces a less pigmented palms skin [42, 43]. In human melanocyte and melanoma, melanogenesis stimulation by a-melanocyte-stimulating hormone (a-MSH) induces phosphorylation of β-catenin-Ser675 and stabilization of β-catenin protein, which suggested Wnt signaling could play a key role in the physiological regulation of human epidermal melanogenesis [44]. However, the exact mechanisms behind the Wnt mediated effects on melanocytes in human epidermis have not been elucidated.