Objective: This study aimed to explore clinical and virological characteristics of chronic hepatitis B (CHB) patients with hepatic steatosis in order to provide a theoretical basis for the prevention and control of hepatic steatosis.

A total of 291 CHB inpatients were recruited from the Affiliated Dongnan Hospital of Xiamen University between January 2008 and June 2011. CHB was diagnosed on the basis of clinical presentations and pathological features according to the “Guidelines for Prevention and Treatment of Chronic Hepatitis B (2010 version)” [7]. Infection of hepatitis A virus (HAV), HCV, hepatitis D virus (HDV) and hepatitis E virus (HEV), drug-induced hepatitis, alcoholic hepatitis and autoimmune hepatitis were ruled out before study. These patients were divided into two groups according to the presence of hepatic steatosis. Among all participants, 132 were diagnosed with hepatic steatosis (120 men and 12 women, age: 10-63 years [37.05 ± 9.55 years]) and hepatic steatosis was not observed in remaining 159 patients (138 men and 21 women, age: 19-65 years, [40.38 ± 16.61 years]). This study was approved by the Clinical Ethics Committee of Affiliated Dongnan Hospital of Xiamen University, and informed consent was obtained from all patients before study.

HBV DNA level was determined by quantitative real-time fluorescence polymerase chain reaction (qPCR) using a AG-9600 Thermal Station and a AG-9600 Amplisensor Minilyzer (Biotronic, USA). The fluorescent reagent and the standard HBV DNA were provided by the same company. Asymmetric primer 1 was 5′-TGTCTCGTGTTACAGGCGGGGT-3', asymmetric primer 2 was 5′-GAGGCATAGCAGCAGGAGAAGAG-3', and fluorescent primer was 5′-TCGCTGGAAGTGTCTGCGGCGT-3'. One copy was defined as 3.2 kb HBV DNA in 1 ml of serum, and data were expressed as N = 10 × copies/ml.

According to the BMI criteria for Asians developed by the Regional Office for the Western Pacific Region of World Health Organization (WHO) (2000) [8], normal weight, overweight and obesity were defined as BMI= 18.5-23.0 kg/m2, 23.0-25.0 kg/m2 and ≥ 25.0 kg/m2, respectively. Central obesity was determined by WHR ≥ 0.9 (male) or ≥ 0.8 (female). Hyperglycemia was diagnosed when the FBG was ≥ 5.6 mmol/L according to the diagnostic criteria of diabetes mellitus by WHO (1999) [9] and the recommended criteria of diabetes mellitus by American Diabetes Association (ADA) (2003) [10]. Hypertriglyceridemia and hypercholesterolemia were diagnosed when TG was ≥ 1.7 mmol/L and TC was ≥ 5.2 mmol/L, respectively, according to the Guidelines on Prevention and Treatment of Blood Lipid Abnormality in Chinese Adults [11]. HBV DNA of ≥ 103 copies/ml was considered positive for virus replication. Hepatic steatosis was graded as: F0 (no significant lipid droplets in hepatocytes), F1 (< 30% hepatocytes with microvesicular steatosis), F2 (30~50% hepatocytes involved), F3 (50~75% hepatocytes involved) and F4 (>75% hepatocytes involved) [12].

Liver biopsy was performed to obtain the specimens under the ultrasound guidance within 1 week after admission, using a needle by which a negative pressure (suction) was applied. Each specimen was longer than 2 cm and had more than 10 portal areas. Specimens were immediately fixed in 4% formaldehyde, dehydrated, embedded, sliced, and examined after hematoxylin-eosin staining, Masson's trichrome staining and reticular fiber staining. All the sections were blindly and independently assessed by 2 experienced pathologists [13].

A case-control study was conducted. Variables with normal distribution were compared using rank sum test. Quantitative data were expressed as means ± standard deviation (SD). Where appropriate, comparisons were performed using a paired t test or a Mann-Whitney U test. Qualitative data were presented as rate and compared with Chi-square test. A value of P < 0.05 was considered statistically significant. Statistical analysis was done with SPSS version 13.0 for Windows.

BMI of CHB patients with and without hepatic steatosis 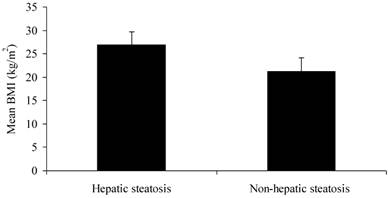 Gender, age and anthropometric indices of CHB patients with and without hepatic steatosis.

FBG, TG and TC of CHB patients with and without hepatic steatosis 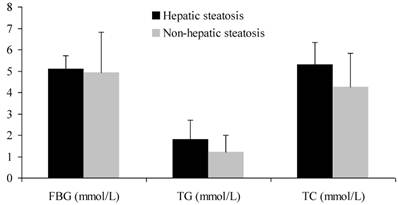 Serum biochemical parameters of CHB patients with and without hepatic steatosis.

Virological parameters of CHB patients with and without hepatic steatosis.

Histological features of CHB patients with and without hepatic steatosis.

The incidence of CHB is decreasing as a result of effective implementation of hepatitis B vaccination, and the proportion of HBV carriers also significantly declines due to proper use of antiviral agents [14]. The prevalence of HBsAg positive patients in China also decreases, although it is still as high as 7.18% [7]. In clinical practice, hepatic steatosis is frequently found in CHB patients [6] with a reported incidence of 18%-27% [15, 16]. With the improvement of living standard and change in lifestyle in recent years, the distributions of BMI, WHR and WC also significantly alter. The BMI, WHR and WC are continuously increasing in both developed and developing countries. The numbers of overweight and obese subjects are 14.6 billion and 500 million, respectively, around the world [17]. The prevalence of hepatic steatosis in CHB patients tends to increase over years, and patients with these conditions may develop cirrhosis or even hepatocarcinoma [2]. Hepatic steatosis can be induced by excessive alcohol intake, drug abuse, nutrition imbalance and metabolic diseases and is generally associated with hyperlipidemia, hypertension, type 2 diabetes mellitus, cardio-cerebrovascular diseases and some malignant tumors, exerting important impacts on human health [18]. CHB patients usually have different lifestyles and diet habits from healthy people because of lack of exercise and improvement in appetite during recovery period. Therefore, to determine factors influencing the development of hepatic steatosis in CHB patients may help us in the prevention and treatment of these conditions. It is also crucial for screening and confirming these influencing factors of these diseases so that we can timely prevent and early diagnose steatosis in CHB patients.

Pathological examination in the present study showed that the prevalence of hepatic inflammation and fibrosis was significantly higher in patients without steatosis, suggesting that, when HBV infection and hepatic steatosis coexist, hepatic steatosis may not affect the severity of hepatic inflammation and fibrosis of patients with HBV infection, but these results remain to be confirmed in epidemiologic studies and clinical cohort studies.

The study was supported by the Zhangzhou Technology Project (Z04094) and Tianqing Hepatic Disease Fund of Chinese Foundation of Hepatitis Prevention and Control (TQGB2011018).

10. The Expert Committee on the Diagnosis and Classification of Diabetes Mellitus. Follow-up report on the diagnosis of diabetes mellitus. Diabetes Care. 2003;26:3160-3167

15. Thomopoulos KC, Arvaniti V, Tsamantas AC. et al. Prevalence of liver steatos is in patients with chronic hepatitis B: a study of associated factors and of relationship with fibrosis. Eur J Gastroenterol Hepatol. 2006;18:233-237