Cardiovascular (CV) disease is the major cause of death in patients with end-stage renal disease (ESRD) (1), and vascular calcification is a non-traditional risk factor for CV events in these patients (2). Among the non-invasive methods of measuring the degree of vascular calcification, computed tomography (CT) is known to be the gold standard method with reproducibility (3). The presence of abdominal aortic calcification (AAC) is a marker of both subclinical atherosclerotic disease and arteriosclerosis, and is also an independent predictor of CV morbidity and mortality (4). The assessment of the degree of AAC may therefore provide additional prognostic value in ESRD patients.

The prognostic impact of vascular calcification in peritoneal dialysis (PD) patients has been demonstrated in previous reports (5-8). These studies included both haemodialysis and peritoneal dialysis (PD) patients, in whom vascular calcification was assessed using plain radiographs of chest and abdomen, or CT of femoral artery and coronary artery. Although there have been reports about the measurement of the AAC using plain abdomen CT in haemodialysis patients (9-14), no report has focused on PD patients. Previous studies with haemodialysis patients have demonstrated the association between vascular calcification and cardiac function in ESRD patients, including arterial stiffness, stroke volume, and left ventricular diastolic dysfunction (15-17). However, the association between AAC and cardiac function has not yet been demonstrated exclusively in PD patients.

The current study was conducted to investigate whether the degree of AAC can predict mortality and CV events in continuous ambulatory peritoneal dialysis (CAPD) patients, using the aortic calcification index (ACI) measured by plain abdomen CT scan, and the relationship between ACI and echocardiographic parameters.

Ninety-two patients who initially started CAPD therapy and who took both an abdominal CT scan and an echocardiography between January 2005 and December 2011 were included. All patients continuously used four exchanges of 2 L glucose-based PD solution, with or without icodextrin. Exclusion criteria included ultrafiltration failure, on-going treatment of peritonitis, current malignancy, and previous history of parathyroidectomy. The medical records of these patients were retrospectively reviewed.

In line with the principles of the Declaration of Helsinki, the study protocol was approved by the institutional review board of the Catholic University of Korea (OC11RSSI0093), and all patients gave written informed consent to participate in the study.

The abdominal aorta was examined on a consecutive, sequential, 8-mm section, non-contrast CT scans, and ACI was calculated as the proportion of aortic circumference covered by calcification, as previously described (9, 10). This method was used to morphometrically quantify arteriosclerosis in the cross-section which showed the most extensive aortosclerosis. The arithmetic mean values of three measurements were calculated and used for analysis. ACI was independently checked by two observers. To optimise reproducibility, all scans in the cross-sectional study were made using the same CT equipment. Patients were divided into two groups according to the median ACI value (18.9) in our population: the low-ACI group (n = 46) and the high-ACI group (n = 46).

Demographic and clinical characteristics of the patients.

Biochemical parameters of the patients

Table 4 shows the relationship between the ACI and echocardiographic parameters. The ACI was positively correlated with LAD and the E/E' ratio, whereas there was no significant correlation with other parameters.

Kaplan-Meier analysis showed that the 5 year-event-free survival rates for all-cause deaths and nonfatal CV events were significantly lower in the high-ACI group compared with those in the low-ACI group (35.7% vs. 64.1%, P = 0.01; Figure 1).

Echocardiographic parameters of the patients. 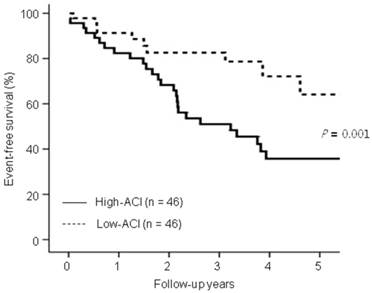 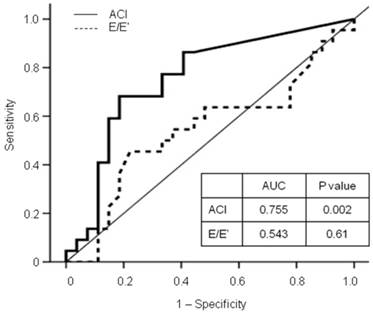 The current study demonstrates that ACI is an independent predictor for all-cause mortality and nonfatal CV events in CAPD patients. In addition, the ACI provided the highest predictive value for mortality and CV events among the echocardiographic parameters of left ventricular systolic or diastolic dysfunction. The results therefore suggest that the ACI can be as useful as an echocardiographic parameter for risk assessment of adverse outcomes in CAPD patients.

Risk factors implicated in vascular or tissue calcification in the PD population are known to be age, calcium-phosphorus balance, the duration of PD, lipid and C-reactive protein levels, the presence of diabetes, and malnutrition (22). The results of the present study are consistent with previous reports in that the high-ACI group was significantly older and had a longer dialysis vintage and a higher prevalence of diabetes compared with the low-ACI group. However, the biochemical measurements did not differ between the two groups, especially the lipid profiles and calcium and phosphorus levels, which are important for arterial calcification and as atherosclerotic risk factors. The reason for this discrepancy is unclear, but may be partially related to the use of drugs in the two groups. In this study, the patients' treatment was not standardised during the follow-up period. There is a possibility that drugs, such as those for dyslipidaemia or for calcium and phosphorus control, might have affected the laboratory results.

Previous studies have reported that vascular calcification is associated with cardiac changes in ESRD patients, including arterial stiffness, stroke volume, and left ventricular diastolic dysfunction. These reports have assessed calcification in the coronary artery, femoral artery, abdominal aorta, or aortic arch using plain radiograph or reconstituted CT (15-17). Recently, we have reported that ACI is associated with diastolic dysfunction in haemodialysis patients (14). However, the association between AAC and cardiac function has not yet been demonstrated exclusively in PD patients. In the current study, the high-ACI group showed significantly higher LVDd, LAD, E/A ratio and E/E' ratio, and lower EF than the low-ACI group. In addition, the ACI was positively correlated with the LAD and E/E' ratio. The E/E' ratio is an accurate estimate of LVFP and a reliable marker of diastolic dysfunction in ESRD patients (23). Therefore, our results suggest that ACI is associated with LV diastolic stiffness and limited diastoilc filling. Increased LVFP results from increased left ventricular diastolic stiffness and accompanies limited diastolic filling (24). Therefore, our results suggest that AAC is associated with limited diastolic filling in CAPD patients, which is consistent with the results in our previous study of haemodialysis patients (14). This may be because vascular calcification results in reduced compliance of large arteries and autonomic dysfunction (25), and increased arterial stiffness is associated with vascular calcification and diastolic dysfunction (15, 17). LAD has been used as a parameter of left atrium size, although the left atrial volume has become a preferred measurement. The left atrium contributes up to 30% of the total LVSV in the normal population, and enlarges in response to pressure and volume load (26). Therefore, an increased LAD may reflect an increase in pressure and/or volume overload. It was reported that enlarged left atrial volume is common in PD patients because of chronic volume overload and increased afterload due to left ventricular hypertrophy (27). In this study, LVMI and LVEF were not significantly correlated with ACI, which means that the AAC was not associated with LV hypertrophy or systolic dysfunction, respectively. As such, our results may reflect that AAC is more associated with chronic volume overload rather than afterload due to left ventricular hypertrophy in CAPD patients. Taken together, AAC was associated with diastolic dysfunction and volume overload.

There are some reports which have discussed the prognostic impact of vascular or tissue calcification in PD patients (5-8, 28). However, only two studies included PD patients exclusively, and these studies assessed calcification in the coronary artery by CT or the cardiac valve by echocardiography (8, 28). No previous reports have discussed the prognostic impact of AAC in PD patients, especially as assessed by pain abdomen CT scan. Our results showed that the ACI independently predicted all-cause mortality and nonfatal CV events. Previously it was reported that the E/E' ratio is an independent predictor of all-cause mortality and CV death in PD patients (29). Similarly, the present study showed that the E/E' ratio predicted adverse outcomes. Interestingly, our results showed that the predictive value of ACI for adverse outcomes was higher than that of the E/E' ratio. There are several possible reasons for this. First, the ACI may represent both atherosclerosis and vascular stiffness. The AAC assessed by CT scan can be from both intimal and medial calcification (2). Intimal calcification represents an advanced stage of atherosclerosis and is associated with the development of plaques and occlusive lesions (30). Medial calcification does not obstruct the lumen but increases vascular stiffness (31). Second, the ACI may represent the volume status of PD patients. In the current study, the ACI was associated with LAD, but not with LVMI or LVEF. As LAD is an estimate of left atrial volume, our results suggest that AAC is more associated with volume overload rather than afterload. Third, the ACI may be a more stable index for reflecting the cardiovascular status than the E/E' ratio. As the Doppler indices of diastolic function reflect the beat-to-beat interaction of LVFP and left ventricular compliance, the E/E' ratio is sensitive to rapid alterations in ventricular preload and afterload (32).

This study has several limitations. First, it was retrospective, and therefore, the treatment was not standardised between the two groups, as previously mentioned. Second, the drug effects on AAC and clinical outcomes were not assessed. Third, our sample size was not large and the measured ACI values were within a relatively wide range. In addition, the follow-up period was relatively shorter than that in previous reports. Therefore, further study with larger sample sizes and longer follow-up periods is needed to support the clinical importance of ACI.

In conclusion, our results clearly demonstrate that ACI predicts all-cause mortality and nonfatal CV events in CAPD patients, and that the prognostic value is as useful as echocardiographic measurements of cardiac function. Abdomen CT does not require special equipment and is available at small centres, and ACI can be easily measured by inspecting multiple aortic slices above the aortic bifurcation (9). Therefore, we cautiously suggest that ACI can be easily and accurately used for prognostication and cardiovascular risk stratification in CAPD patients.

This study was supported by a grant through the National Research Foundation of Korea (NRF) funded by the Ministry of Education, Science, and Technology, Republic of Korea (20110013312), and Baxter Incorporated (GKOR5605).