Quality Of Life of Patients with Neurodermatitis

Background: Neurodermatitis is a common chronic skin disease. Although not life-threatening, it can produce an important psychosocial burden, sleep disturbance and sexual dysfunction. Patients with neurodermatitis tend to have poor social skills or interpersonal resources and a lack of flexibility. However quality of life (QoL) of patients with neurodermatitis has seldom investigated. The objective of this study is to assess the impact of neurodermatitis on patients' QoL using the Dermatology Life Quality Index questionnaire, and assess its feasibility and internal consistency.

Methods: One hundred and fifty consecutive outpatients seeking treatment for neurodermatitis and 250 patients with psoriasis in the Department of Dermatology, the Second Hospital of Xi'an Jiaotong University, were assessed for eligibility for this prospective study from July 1, 2011 to September 30, 2011. Demographic data and disease-related characteristics were collected.

Results: The overall mean DLQI score for neurodermatits (9.34) was lower than that for psoriasis (13.32) (P < 0.001). Patients with neurodermatitis scored significantly lower for all items except Q1 (symptoms) and Q9 (sexual difficulties). No strong relationship between disease-related characteristics and quality of life could be found. The inter-item correlation averaged 0.415 and Cronbach's alpha was 0.889, indicating high internal consistency.

Conclusion: This is the first study to attempt to measure the impact of neurodermatitis for both male and female patients on QoL. Neurodermatitis moderately affected the QoL of the patients.

Neurodermatitis, also known as lichen simplex chronicus, is a common chronic skin disease, affecting up to 12% of the total population, and women are more affected than men[1]. The disease is characterized by lichenificated plaque as a result of excessive scratching. Neck, elbow, ankles, vulva, eyelid even faces are the most common affected sites. Although neurodermatitis is not life-threatening, it can produce an important psychosocial burden. It has been suggested that patients with neurodermatitis suffer from depression, anxiety and other treatable psychological disorders[2]. Negative emotional states are the main personality component of patients (greater tendency to pain avoidance, greater dependency on other peoples' desires, and more conforming and dutiful)[3]. Patients with neurodermatitis tend to have poor social skills or interpersonal resources and a lack of flexibility. Neurodermatitis may be associated with sleep disturbance and sexual dysfunction[4]. All these data constitute a growing body of evidence indicating a negative impact of neurodermatitis on patients' quality of life (QoL).

One study has investigated QoL of patients with neurodermatitis, indicating that the disease had a very large impact on patients' QoL[1]. However, given the small samples, female patients solely included within the study and different culture background, results may be imprecise. The aims of this study were to achieve a description of health status in a large sample of patients with neurodermatitis in China, assess disease impact on QoL. Patients with psoriasis were selected as control.

One hundred and fifty consecutive outpatients seeking treatment for neurodermatitis and 250 patients with psoriasis in the Department of Dermatology, the Second Hospital of Xi'an Jiaotong University, were assessed for eligibility for this prospective study from July 1, 2011 to September 30, 2011. All subjects were given informed consent prior to participation. Patients less than 18 years old or having any other skin/systemic disease or mental disorders were excluded from the study. The study was approved by the ethics committee at the hospital.

Dermatology Life Quality Index was used according to the instructions given by Finlay and Khan, which has been validated in Chinese[5]. The Dermatology Life Quality Index (DLQI) has been used in 33 different skin conditions and is available in 55 languages. DLQI comprises 10 items, giving a sum score ranging between 0 and 30[6]. Ten questions concerning symptoms, embarrassment, shopping/daily activities, clothes, social/leisure, sport, work or study, relationships, sexual difficulties and treatment. High DLQI scores imply low quality of life. The DLQI has been used in cross-sectional studies of different disorders, such as acne, atopic dermatitis and psoriasis. Ten items were explained to all subjects and data collectors helped them to complete the survey questions.

The differences between groups were evaluated according to Fisher's exact test for comparing proportions. The Mann-Whitney U-test was used to test the equality of distributions of quantitative outcomes. Multiple logistic regression was performed to examine the independent effects of explanatory variables on DLQI scores. Construct validity was tested by factor analysis. Reliability was assessed by average inter-item correlation, item-total correlation and Cronbach's alpha. All analyses were done using SPSS software (version 13.0; SPSS Inc., Chicago, IL, USA). P <0.05 was interpreted as statistically significant. Adjustments for p-Values were made.

Patient and disease characteristics of both groups

The relationships between DLQI scores and clinical, social and demographic factors were analyzed using multiple logistic regression. Although patients living in the rural region were 5.88 times more likely to have a high score when compared with that living in the urban region, the difference was not significance. Scores were not associated with gender, education, duration, employment status and age.

Demographic characteristics of the groups of patients.

†For testing equality of distributions between both groups according to contingency table analysis for proportions and Mann-Whitney test for continuous variables. *P < 0.05, significance level.

Disease severity for both groups.

Banding of the DLQI with the scores for both groups.

Individual and total DLQI scores of the groups.

Six dimensions' scores of the groups.

The value of Kaiser-Meyer-Olkin measure (KMO = 0.894) and Bartlett's test of sphericity (χ2= 649.908, P<0.001) support for factor analysis. We found Q1 (symptoms) accounted for 50.80% of the variance in DLQI score in this setting. The scree plot showed a sharp drop in eigenvalues from the first to the second component, with subsequent components extracting progressively less of the variance. This indicated that a one-dimensional solution is to be preferred (Fig. 1). The loadings of the DLQI items are given in Table 6. All items show high loadings (> 0.40) from the first component.

Factor loadings of the DLQI items.

Scree plot of the factor analyses of DLQI. 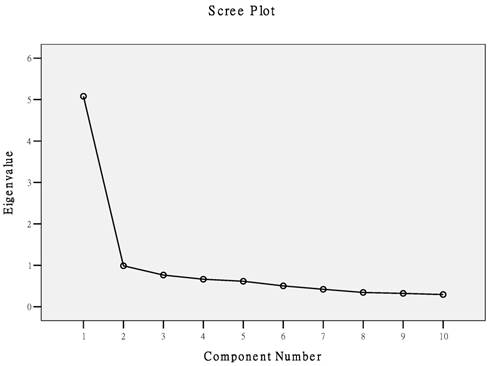 Based on the prospective study of 149 patients with neurodermatitis, it is obvious that neurodermaitits had a moderate influence on QoL of patients. QoL of most of (32.9%) our patients were moderate affected. The mean DLQI score in our study was 9.34, which was lower than previous report. Ermertcan AT found that DLQI score for patients in Turkey was 11.95[1]. It can be explained by the limitation of patient selection. Patients included in the previous study were female only. In studies evaluating patients with chronic conditions, women consistently report poorer QoL than men[7]. Women were reported more pain[8], more physical and psychological impairments[9]. Moreover, cases enrolled in the previous study were 43. When QoL affected by a specific entity was discussed, enough sample size will be more representative.

Ongenae K states that psoriasis has been studied extensively and is widely accepted as causing considerable psychosocial distress and quality of life impairment[10]. In this study, we chose to compare neurodermatitis patients with psoriasis patients seeking treatment in our hospital. Total

DLQI scores of patients with neurodermatitis was lower than that with psoriasis. Interestingly, we find there are no differences between Q1(symptoms) and Q9(sexual difficulties) when ten items are compared. Severe itching is a prominent feature of neurodermatitis, however psoriasis patients suffer from intensive itching are rarely concerned. Consistent with our finding, Szepietowski JC found that itching was found in 80% of psoriatic patients recently[11]. The presence and intensity of itching did not depend on age, gender, type of psoriasis, and duration of disease.

Sexual dysfunction in many dermatological diseases has recently attracted significant attention, because of its negative impact on quality of life. The impact of neurodermatits and psoriasisi on sexual function had been studied previously. Inconsistent with our data, Mercan S found that neurodermatitis patients had more sexual problems than the psoriasis counterpart[12]. The difference may be due to the sample size. There were only 31 patients with neurodermatitis and 24 patients with psoriasis, while the counterpart in our study are 149 and 246 respectively. Another comment is related to the questionnaire applied in the survey. DLQI was applied in our study while Arizona Sexual Experience Scale in Mercan's study. Although DLQI has question(Q9) about sexual life, it do not specifically evaluate sexual problems. Gender-specific sexual function scales and proper sample size will be needed in future study.

Questions 1 (symptoms) and domain 1(symptoms and feelings) had the most impact on patients with neurodermatitis, which indicate that controlling of itching will improve QoL impressively. Nevertheless, the ”itch-scratch” cycle is extremely difficult to stop. Tropical aspecific antipruritic agents are not very helpful. Topical tacrolimus, glucocorticoid creams, ultraviolet-based therapy, oral cyclosporine, thalidomide, glucocorticoid and transcutaneous electrical nerve stimulation can be effective in the treatment of neurodermatitis, however all these management are hard to prevent recurrence[13,14]. In recent years, researchers pay more attention to modify patients' nonadaptive behaviors. Cognitive-behavioral therapies have given good results[15].

A questionnaire is considered to be internally consistent when there is a high correlation among the scores of items. This inter correlation is expressed by Cronbach's alpha. The minimum requirement for an instrument to be internally consistent is a value of 0.70[16]. Several other investigators have assessed the internal reliability of the DLQI, and have demonstrated Cronbach's Alpha scores of between 0.75 and 0.92[17]. Among patients with neurodermatitis, Cronbach's alpha was 0.889, indicating high internal reliability.

In conclusion, neurodermatits moderately affected the QoL of the patients. People should pay more attention to the chronic disease, although it is not life-threatening. There are two limitations in this study: we were unable to compare QoL of patients before and after treatment, which could be incorporated in the planning of future studies. Another comment is related to the questionnaire itself, part of patients worried about the impact of diet on disease which does not exist in DLQI because of the different culture background.