This work explored the short-term effect of whole body vibration (WBV) training on anthropometry, body composition and muscular strength in obese women. Fifty obese women (age=46.8±7.81[SD]y; BMI=35.1±3.55kg/m2) were assigned to a ten-week WBV training period, two times a week (in each session, 14min vibration training, 5min rest; vibration amplitude 2.0-5.0mm, frequency 40-60Hz), with (n=18) or without (n=17) radiofrequency, or to a non-exercise control group (n=15). Subjects were instructed not to change their habitual lifestyle. Before and after the ten-week experimental period, anthropometric measurements, dual-energy X-ray absorptiometry (DXA), and the leg press, leg curl and leg extension strength tests were carried out. All changes in the two groups of WBV training, with or without radiofrequency, were similar and these groups were combined in a single WBV intervention group. As compared to controls, subjects submitted to WBV training had significantly lower BMI, total body and trunk fat, sum of skinfolds and body circumferences. On the other hand, lower limb strength tests were increased in the WBV group. These preliminary results suggest that WBV training may improve body composition and muscular strength in obese women and may be a useful adjuvant to lifestyle prescriptions.

Physical activity is a mainstay of weight loss strategies for obese subjects, as it leads to increased energy expenditure. Moreover, regular physical activity has a number of additional favorable effects in these subjects, improving cardiorespiratory fitness, even in the absence of weight loss [1], and quality of life [2]. Unfortunately, the vast majority of obese people maintains a sedentary lifestyle and is not willing to be included in regular exercise programs.

Whole-body vibration (WBV) may be considered a light resistance exercise modality, based on automatic body adaptations to repeated and rapid oscillations of a vibrating platform [3]. These changes induce continuous eccentric-concentric muscular work, with increased oxygen consumption [4]. It was suggested that regular WBV training positively affects body composition and strength. However, available evidence is scarce, especially in obese subjects.

Fifty adult obese women (mean age 46.8±7.81[SD]y, BMI 35.1±3.55kg/m2) previously submitted to lifestyle counseling and with body weight stable over the last three months participated in this study, after giving their informed consent. No patients suffered from diabetes or other significant diseases or had contraindications of vibration exercise. Moreover, none of them had been taking medications in the last six months that could potentially interfere with the evaluations carried out in the study. Subjects with BMI>40 kg/m2 were excluded. The Institutional Review Board at the University of Verona approved the study protocol and the trial was registered at ClinicalTrials.gov (Identifier: NCT01329328).

At recruitment, subjects were randomly assigned to one of three groups: Control (n=15), WBVa (intervention: whole body vibration alone, n=17), or WBV+RF (intervention: whole body vibration plus radiofrequency, n=18). All subjects were instructed not to change their current alimentary and physical activity regimen during the trial. Nine subjects were excluded from the study, due to non compliance or voluntary drop out (Control, n=2; WBVa, n=4; WBV+RF, n=3). Therefore, the total number of subjects included in analyses was 41.

Subjects of the WBVa and WBV+RF groups trained twice a week for ten consecutive weeks. In each session, subjects performed 20 sequential unloaded static leg and arm exercises. Each session lasted 19 min (14 min vibration training, 5 min rest) and duration of each exercise was 30-60 s. In the WBV device (BioplateRF, BIOS, Milano, Italy) the vertical vibration amplitude ranged 2.0-5.0 mm, and the frequency 40-60Hz. In the WBV+RF group, RF was applied by means of bilaterally placed adhesive plaques on the lower limb (n=2), trunk (n=4), and upper limb (n=2), at 75% of maximum output power.

The design of the study was a randomized pretest-posttest design with three treatment groups: Control, WBVa, and WBV+RF. Sample size was calculated using the method of Borm et al. [6], setting an effect size δ=30 for the sum of skinfolds, a standard deviation σ=40, a correlation between outcome measured at T0 and T1 ρ=0.7, a significance α=0.05 and a power β=0.80 (two-tailed test). The required sample size was 13 subjects per group.

Baseline mean values were compared using one-way ANOVA. Posttest mean levels of anthropometry, body composition and muscular strength, adjusted for differences in pretest levels, were compared in the two groups by analysis of covariance (ANCOVA). Results are expressed as mean ± standard error of the mean (SEM). Significance was set at P <0.05.

A first analysis showed similar changes in the WBVa and WBV+RF for all the measured outcomes (data not shown). Hence, these two groups were merged into a single intervention group (labeled WBV, n=28).

The Control and WBV group had similar age (P=0.806). At baseline (T0), BMI and fat mass as well as body composition measures were also similar between groups (P>0.05 for all measurements). Table 1 shows the mean (±SEM) values of main anthropometric and body composition parameters in the two groups at T0 and T1, the mean percent change from baseline [100 · (T1 -T0)/T0], and the P values of ANCOVA. ANCOVA verified the null hypothesis that mean values in the two groups are not different at T1 accounting for baseline values. After training, as compared to Control, the WBV group showed significantly lower anthropometric and body composition variables: BMI, total body and trunk FM, the sum of skinfolds, all body circumferences but the wrist; body %FM was at the limit of significance (P=0.056). BMD was slightly increased after training (+0.7%) in the WBV group while showing some reduction in the Control (-1.8%); the change was significant P<0.001). Waist-to-hip ratio and total body FFM did not significantly differ between groups. After training, strength was significantly higher in the WBV group for all tests.

Mean values (±SEM) of anthropometric and body composition parameters in obese women before (T0) and after (T1) a ten-week period of no exercise (Control, n=13) or whole body vibration training (WBV, n=28), and p-values of ANCOVA (P). The mean (±SEM) percentage change from baseline (Δ% = 100· (T1-T0)/T0) in each group is also reported.

Individual values of selected anthropometric and body composition parameters in obese women before (T0) and after (T1) a ten-week period of no exercise (Control) or whole body vibration training (WBV). 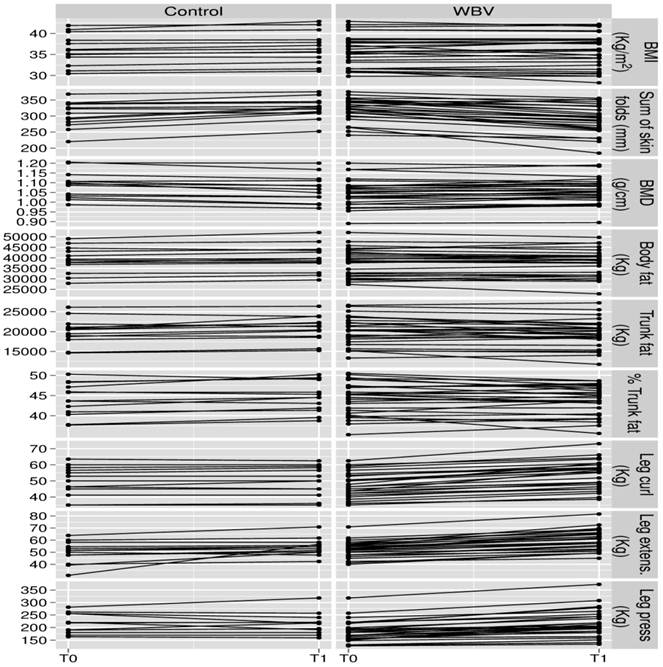 Our study shows that addition of two sessions per week of WBV training to standard lifestyle counseling over ten weeks reduced BMI and body FM as well as skinfold thickness and several body circumferences, and may have positive effect on BMD; instead, no additive effect of RF administration to WBV training was found under the current experimental conditions, suggesting that longer or more intense RF treatment could be required for obese females to get similar results as nonobese [5].

Previous investigations of WBV effect in obesity are quite limited in number [7-10]. Results of the present work will be discussed in the frame of the available limited evidence. In a preliminary report on a work associating WBV training and hypocaloric (≅ 600kcal/day) diet in obese adults, Vissers et al. [8] found at month three of treatment an average 8% reduction in both body mass and BMI. The effect of WVB alone was not tested. In our study, change in body mass and BMI after WBV training was mild (-0.4%); overlapping results were obtained in small samples of obese middle-age females after a six-week [9] and eight-week [10] WBV intervention. Interestingly, the BMI reduction we found is similar to that reported by increasing daily steps by more than 2,100 in a protocol in which obese patients were monitored by a pedometer [11].

In our subjects DXA-measured fat mass loss after WBV training was mainly due to a reduction of trunk fat mass, suggesting a reduction in visceral adipose tissue (VAT). In our study we did not measure VAT. However, a previous study reported that WBV might specifically enhance computed tomography-measured VAT loss in obese subjects submitted to caloric restriction [8], suggesting that visceral fat, a determinant of the metabolic syndrome, might be more sensitive to WBV. The reciprocal effects of WBV training on BMD and VAT may have clinical relevance. Traditionally, obesity is thought to be beneficial to bone via mechanical loading; however, recent studies have shown an inverse association between VAT and BMD in obese premenopausal women [12] as well as a significantly lower BMD in older obese women with nonvertebral fractures compared with those without fracture suggesting that “fractures in the obese exhibit characteristics of fragility fractures” [13]. Therefore, WBV training might add to better bone health in obese women.

In our study, WBV did not significantly affect body FFM. In contrast, previous studies showed an increase of lean mass after WBV training in young non-obese [14] as well as in sedentary overweight postmenopausal [15] women. It could be hypothesized that in our study duration of WBV training was too short to observe changes in lean mass. Nevertheless, dynamic strength of the lower limbs significantly improved in the WBV group. Similar results were previously reported in untrained people and elderly women [16]; while the physiological mechanism(s) involved in such an effect are not fully elucidated, it has been shown that addition of WBV to static and dynamic exercises increases oxygen uptake [7] and improve arterial function and muscle strength [17] in overweight and obese subjects. These findings are of particular interest in obese subjects considering that strength is a negative predictor of metabolic syndrome incidence [18].

Although active exercise remains the first option for obese subjects, the results of this preliminary study suggest that WBV training, an exercise modality which may be easily performed indoors all through the year, may represent a useful addition to customary lifestyle prescription in obese women, yielding favorable changes in body composition and muscle strength. Moreover, in overweight and obese women WBV has been shown to enhance (in association with endurance training) the bioelectrical phase angle, an increasingly used marker of health status [9], and improve glycemic control in type 2 diabetes [19]. Therefore, WBV is qualifying as a useful complementary treatment in obesity.

In summary, this preliminary study shows that WBV is a reliable, effective tool to ameliorate body composition and muscle strength, and to maintain bone mass density in obese women. Further work is needed to assess the long-term efficacy and tolerability of WBV.

The authors are grateful to subjects who volunteered in the study. F. Piscitelli is fellow in the Doctoral Program “Multimodal Imaging in Biomedicine” at the University of Verona.

This work was supported in part by a research grant from BIOS s.r.l. to C.Z. No other competing interest exists.