Background: Plasma B-type natriuretic peptide (BNP) is used as a diagnostic marker of cardiovascular diseases. BNP is secreted mainly from the myocardium and has been detected by immunoreactivity in brain and cerebral arteries. The aim of our study was to investigate plasma BNP in patients with acute cerebral infarction according to infarction subtype and infarction volume.

Methods: We studied 141 patients with acute cerebral infarction, classified as large artery atherosclerosis (LAA), cardioembolism (CE), or small vessel disease (SA) according to the Trial of Org 10172 in Acute Stroke Treatment classification. Plasma BNP level was measured in patients and 61 healthy controls. We analyzed various clinical and laboratory variables of patients according to plasma BNP level.

Conclusions: Plasma BNP may be helpful for prediction of etiologic classification of acute cerebral infarction and infarction volume.

B-type natriuretic peptide (BNP) belongs to a family of natriuretic peptides and is involved in the regulation of various physiologic functions such as natriuresis, diuresis, and vasodilation [1]. Plasma BNP is increased in edematous disorders with salt and fluid overload and increased atrial or ventricular wall tension [2]. Increased plasma BNP is a known marker of cardiovascular diseases [1-4]. Plasma BNP level is frequently elevated in acute cerebral infarction and has been associated with cardiac dysfunction, clinical severity, and poor prognosis of cerebral infarction [5-10]. The aim of this study was to investigate plasma BNP in patients with acute cerebral infarction according to variables such as infarction subtype and infarction volume.

Among 236 consecutive patients with acute cerebral infarction who were admitted within three days of onset and whose blood samples were obtained at the time of initial laboratory studies, 141 patients were enrolled and classified as belonging to the large artery atherosclerosis (LAA), cardioembolism (CE), and small vessel disease (SA) groups according to the Trial of Org 10172 in Acute Stroke Treatment (TOAST) classification [11]. Patients with renal dysfunction (serum creatinine >2.5 mg/dL), dialysis dependent renal failure, pulmonary disease such as acute respiratory distress syndrome, chronic obstructive pulmonary disease with cor pulmonale and pulmonary embolism, or thrombolytic therapy were excluded from the study.

During admission, brain MRI was performed with a 1.5-T system (Gyroscan Intera, Philips Medical Systems) using a multi-slice echo-planar imaging technique to acquire diffusion weighted images (DWIs). The imaging parameters of DWI were as follows: 3400/60/4 (repetition time, msec/effective echo time, msec/excitation), 24 cm field of view, 5/2 mm slice thickness/gap, and 128×128 matrix. B values were 0 and 1000 s/mm2. For the acquisition of the apparent diffusion coefficient, the images were applied in the x, y, and z directions. Acute cerebral infarction was defined as an area of high signal intensity on the DWI. Infarction volume was calculated by multiplying the manually contoured hyperintense region by the slice thickness plus the intersection gap with the aid of Scion image software. Areas of acute infarction demonstrated on DWI were measured by an investigator who was not aware of the study purpose.

The mean age of the patients was 67.6 years. The patients consisted of 62 women and 79 men, and there were 36 current smokers, 77 with hypertension, 33 with diabetes mellitus, 41 with atrial fibrillation, nine with heart failure, and 15 with hyperlipidemia.

A brain DWI was performed in 102 patients, and the mean delay between infarction onset and MRI evaluation was 4.5 ± 3.5 days. Infarction volume was larger in the highest quartile group than in the other groups (Table 2, Fig. 1C).

Vital sign and echocardiographic findings of patients according to plasma BNP quartile. 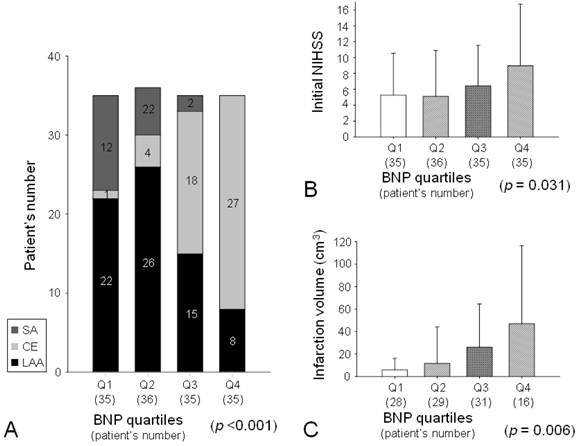 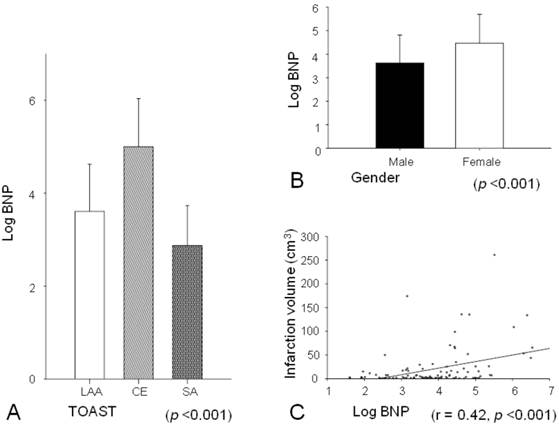 Elevated BNP level in acute cerebral infarction has been found to be associated with cardioembolic mechanism, cardiac dysfunction after stroke, clinical severity, thrombolysis failure, and mortality [8-10, 24-29].

We found that plasma BNP level decreased in the order of cardioembolism, large arterial atherosclerosis, and small vessel disease. Most cardiac disorders that are classified as high or medium risks of cardioembolism by TOAST classification are associated with increased plasma BNP level [11]. In addition, many cardiac disorders related to diastolic dysfunction are also associated with elevated BNP [3, 4]. Furthermore, among biomarker candidates of cerebral infarction, elevated plasma BNP level is well correlated with cardioembolic infarction [24, 25]. Acute cerebral infarction that is associated with increased activity of the sympatho-adrenal and renin-angiotensin systems may lead to cardiac dysfunction [19, 20]. Conventional diagnosis of some cardiac disorders such as paroxysmal atrial fibrillation is time-consuming. In contrast, plasma BNP can be determined within a few minutes and may be useful in the diagnosis of cerebral infarction caused by paroxysmal atrial fibrillation. In addition to cardioembolism, atherosclerosis has also been reported to be associated with elevated BNP [30, 31]. BNP was highly expressed in advanced atherosclerotic lesions, as visualized by strong in situ hybridization [30], and was reported to correlate with surrogate markers of atherosclerotic burden [31].

We found an independent association of plasma BNP level with female gender. There have been a few studies reporting higher BNP concentrations in females [4]. Sex hormones may contribute to regulation of the production/secretion of natriuretic hormones, with estrogen having stimulatory and androgen having inhibitory effects [21, 32].

We note that our study has some limitations. The sample size is too small to generalize, and further research with a larger population will be needed. In addition, our study is based on a single test, and repeated tests during cerebral infarction would be more informative. Lastly, we had limited information about neuroendocrine, cardiac, and renal functions.

This work was supported by a research grant from Yonsei University Wonju College of Medicine (YUWCM-2010).