Retrospective Analysis of the Relationship between Decline in FEV1 and Abdominal Circumference in Male Smokers: the Takahata Study

Background: Metabolic syndrome (Mets) is reportedly associated with chronic obstructive pulmonary disease (COPD). However, the relationship between abdominal circumference (AC) and decline in FEV1 has not been elucidated. We aimed to investigate this relationship among male current smokers.

Methods: Spirometry was performed on subjects (n = 3,257) ≥ 40 years of age, who participated in a community-based annual health check in Takahata, Japan, from 2004 through 2006 (visit 1). Spirometry was re-evaluated, and AC was assessed in 147 of the male current smokers in 2009 (visit 2). The diagnosis of Mets was based on the criteria used in the Hisayama Study.

Conclusions: This retrospective analysis suggested that measuring AC may be useful for discriminating male smokers who show a decline in FEV1.

Long-term cigarette smoking is most important cause of chronic obstructive pulmonary disease (COPD) (1). In patients with COPD, forced expiratory volume in 1 s (FEV1) is progressively reduced as the disease develops. In addition, patients with COPD have various systemic comorbidities, including atherosclerosis, cachexia, diabetes mellitus, and osteoporosis (2-7). These comorbidities are thought to be associated with systemic inflammation due to leakage of mediators from sites of local inflammation in the lung, and this is an important determinant of the morbidity associated with the disease (8). Recently, metabolic syndrome (Mets) has received attention as a comorbidity of COPD (9-12).

Mets is also thought to be a disease of systemic inflammation that is derived from visceral fat (13). Patients with Mets have higher risks of cardiovascular disease, stroke, and death, compared to subjects without Mets (14). Since Mets and COPD both involve states of systemic inflammation, it is conceivable that these diseases share common inflammatory pathways.

The results of recent cross-sectional investigations from China and France suggested that the central obesity component of Mets was associated with impairment of pulmonary function (10,15). However, it was not clear whether Mets is a risk factor for decline in pulmonary function parameters such as FEV1, among healthy smokers. We hypothesized that excess abdominal circumference (AC), one of the major signs of Mets, is associated with a decline in FEV1 among smokers. To examine this hypothesis, we retrospectively investigated the relationship between AC and the rate of decline in FEV1.

This study formed part of the Molecular Epidemiological Study of the Regional Characteristics of 21st Century Centers of Excellence (COE) Program and the Global Centers of Excellence Program in Japan (16). The study was approved by the institutional ethics committee and all participants gave written informed consent.

The study was based on an annual community health check, in which all residents of Takahata town in northern Japan, who were aged 40 years or older, were invited to participate. We have previously reported cross-sectional analyses of spirometry data for subjects who were included in the database from 2004 through 2005 (n = 3,165: 1,380 males; 1735 females) (16-20). We continued to enroll subjects from Takahata in 2006, and recently the additional 2006 database became available for analysis. From 2004 through 2006 (visit 1), 1,579 males and 1,941 females (a total of 3,520 subjects) were enrolled in the study, and performed initial spirometry. Two-hundred and sixty-three subjects were excluded from the analysis because their spirometry data did not meet the specified criteria. The data for a total of 3,257 subjects (1,502 males, 1,755 females) was entered into the final statistical analysis. Subjects used a self-report questionnaire to document their medical histories, smoking habits, current use of medications, and clinical symptoms. The lifetime consumption of cigarettes was expressed as the Brinkman index (number of cigarettes per day x years of smoking). One-hundred and forty-seven of the 523 male current smokers (visit 1) performed subsequent follow-up spirometry in 2009 (visit 2). Body mass index (BMI), Brinkman index, mean blood pressure (BP), triglyceride (TG), high-density lipoprotein-cholesterol (HDL-c), fasting blood sugar (FBS), % predicted forced vital capacity [FVC (%predicted)], and % predicted forced expiratory volume in 1 s [FEV1 (% predicted)] were not significantly different between these 147 male current smokers and the remaining 376 male smoker who did not participate in follow-up spirometry in 2009 (data not shown). However, the mean age of these 147 participants was significantly lower than that of the 376 non-participants assessed in 2004-2006 [mean age (years): 56.40 ± 9.06 vs. 61.09 ± 10.59, P < 0.0001].

AC around the navel was determined at visit 2 using a tape measure. Systolic and diastolic BP were measured using a mercury sphygmomanometer, which was placed on the right arm of seated subjects, who had rested in a sitting position for at least 5 min before the measurement. Measurements were performed twice. Blood samples were taken from the antecubital vein of subjects who had been fasting, and the samples were immediately transferred to chilled tubes.

The diagnosis of Mets was based on the criteria used in the Hisayama Study, a Japanese cohort study in a general population: abdominal obesity with abdominal circumference >90 cm in men; elevated blood pressure with average systolic/diastolic blood pressures ≥130/85 mm Hg; hypertriglyceridemia, defined as a serum TG level ≥150 mg/dL; a low HDL-c level, defined as <40 mg/dL in men; elevated blood glucose with a FBS level ≥110 mg/dL. Metabolic syndrome was defined as the presence of three or more of these factors (21).

Spirometric parameters (FVC and FEV1) were measured using standard techniques, with subjects performing FVC maneuvers on a CHESTAC-25 part II EX instrument (Chest Corp., Tokyo, Japan), according to the guidelines of the Japanese Respiratory Society (JRS) (22). Bronchodilator was not administered prior to spirometry. The highest value from at least three FVC maneuvers by each subject was used for the analysis. The results were assessed by two pulmonary physicians, who visually inspected the flow-volume curves and excluded subjects with inadequate data, as defined by the JRS criteria (22). The rate of decline in spirometric measures [ΔFEV1 (% predicted)/year (%/year) and ΔFVC (% predicted)/year (%/year)] were calculated as [(% predicted value at visit 2 - %predicted value at visit 1)/% predicted value at visit 1] × 100/ time between observations (years).

The student's t-test for parametric data or the Mann-Whitney U test for non-parametric data were used to analyze the differences between two groups of subjects. The chi-square test was used to evaluate differences in proportions. All statistical analyses, including linear regression and logistic regression analyses were performed using JMP version 8 software (SAS Institute Inc., Cary, NC, USA). Data are presented in the Figures and Tables as means (SD) or medians (interquartile range). Significance was inferred for differences with P values < 0.05.

Characteristics of the subjects

Characteristics of the study subjects at visit 1 and visit 2.

A total of 147 subjects were included in the study. AC data were not available for nine subjects. Brinkman index data were not available for 19 subjects due to the lack of precise information about cigarette smoking habit. Values are means (SD) or number (%) of subjects. Difference in Brinkman index between visit 1 and visit 2 was evaluated by the Mann-Whitney U test. Difference in the proportion of FEV1/FVC<0.7 was evaluated by the chi-square test. Differences in other variables were evaluated by Student's t-test. ** P < 0.001, *** P < 0.0001 compared with data for visit 1. BMI, body mass index; AC, abdominal circumference; FVC, forced vital capacity; FEV1, forced expiratory volume in 1 s.

Relationship of abdominal circumference and body mass index with spirometric measures at visit 2.

Multivariate logistic regression analysis for discrimination of subjects showing a decline in FEV1.

Metabolic syndrome and decline in FEV1 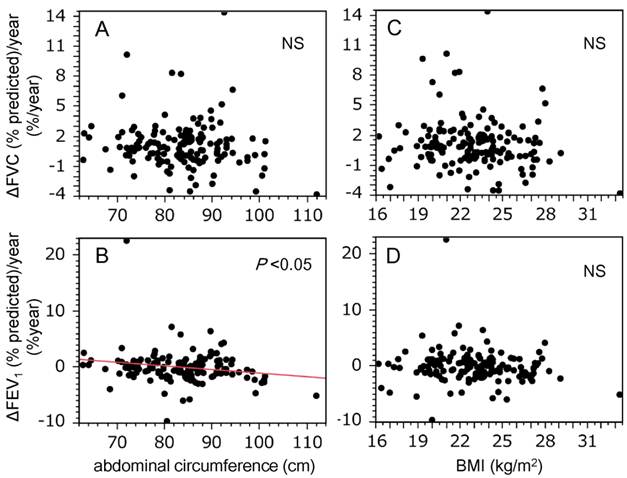 Differences in subject characteristics according to presence or absence of metabolic syndrome (Mets).

Prevalence of decline in FEV1 (% predicted) according to the presence or absence of metabolic syndrome (Mets).

Decline in FEV1 and spirometric measures at visit 2 according to the presence or absence of metabolic syndrome (Mets).

Values are median (interquartile range) or mean (SD). Difference in ΔFEV1 (% predicted)/year between subjects with Mets and those without Mets was evaluated by the Mann-Whitney U test. Differences in other variables were evaluated by Student's t-test. FVC, forced vital capacity; FEV1, forced expiratory volume in 1 s.

Mets is a common disease that is characterized by abdominal obesity, high blood pressure, hypertriglyceridemia, low HDL-c levels, and high fasting glucose levels (24). Data from the Third National Health and Nutrition Examination Survey indicates that this syndrome is present in almost a quarter of US residents aged 20 years or older (25). Although Mets is less prevalent in Asian compared with Western populations, a survey of the incidence of acute myocardial infarction suggested that the prevalence of Mets is also increasing in Japan, resulting in an increased incidence of myocardial infarction among men (26). Mets is associated with an increased risk of diabetes mellitus and cardiovascular disease, leading to increased cardiovascular and all-cause mortality (14). Recent studies have demonstrated that systemic inflammation, derived from visceral fat, is an important mechanism in the pathogenesis of Mets (13). Because both Mets and COPD are associated with the same comorbidities, including atherosclerosis and diabetes, and involve a state of chronic systemic inflammation, the pathogenesis of the two diseases is thought to share a common inflammatory pathway. A recent study showed that the prevalence of Mets is greater in subjects with COPD compared to those without COPD (11,27).

Abdominal obesity may change the compliance of the diaphragm and chest wall. Chen and colleagues reported that a 1-cm increase in AC was associated with a 13-mL reduction in FVC and a 11-mL reduction in FEV1 (23). In the present study, there was no difference in mean BMI between visit 1 and visit 2, although AC was not measured at visit 1. In addition, multivariate logistic regression analysis demonstrated that AC was a significant factor for discrimination of decline in FEV1, independently of ΔBMI (Table 3). It is unlikely that the decline in FEV1 observed in the present study is explained by weight gain during follow-up.

This study had several limitations. First, there may have been sampling bias. Takahata town has a resident population of 15,222 adults aged 40 years or older. For visit 1, data for a total of 3,257 enrolled subjects was entered into the final statistical analysis. Among the 1,502 male subjects, there were 523 active smokers. However, follow-up spirometry in 2009 was only performed for 147 subjects who had continued to smoke; the remaining subjects were lost to follow-up or quit smoking before visit 2. The number of subjects who were followed-up was not large, but the only significant difference between participants and non-participants in 2009 was age (see Method section). Thus, we thought the participants in 2009 were not largely different from non-participants. Differences between participants and non-participants in type of employment, socio-economic status or life style may have influenced the results. However, this information was not available in the present study. Second, pulmonary function testing at visit 2 in 2009 was only performed for male current smokers, not for male non-smokers, ex-smokers or females. This was only because we could not find a sufficient number of testers in 2009. Therefore we needed to focus on the data for the subjects who were assessed in the present study. Because of this limitation, the results from the present study may not be applicable to females or ex-smokers. Third, AC measurements were performed at visit 2, not visit 1. Therefore, the association between decline in FEV1 and AC was retrospectively demonstrated in this study. It should be noted that it could not be concluded that AC is predictive for decline in FEV1 among male smokers. However, despite these limitations we think this study is clinically significant as an initial investigation, and future prospective studies have the potential to confirm AC as a new and simple biomarker for discriminating subjects with a decline in FEV1 among active smokers.

This study was supported by a grant-in-aid from the Global COE Program of the Japan Society for the Promotion of Science, and grants-in-aid for Scientific Research from the Ministry of Education, Culture, Sports, Science and Technology, Japan (19590880, 20590892, and 23390220).

This study was approved by the institutional ethics committee and all participants gave written informed consent.

The authors have no conflicts of interest to disclose.

12. Watz H, Waschki B, Kirsten A. et al. The metabolic syndrome in patients with chronic bronchitis and COPD: Frequency and associated consequences for systemic inflammation and physical inactivity. Chest. 2009;136:1039-46