Helicobacter pylori is a Gram-negative helix-shaped bacterium that is found in about half of the world's population1. H. pylori colonization of the human stomach is consistently associated with gastric mucosal inflammation and is a risk factor for the development of peptic ulcer disease and distal gastric adenocarcinoma2,3. The most intensively studied virulence factors of H. pylori are cytotoxin-associated protein A (CagA) and vacuolating cytotoxin A (VacA), which are both involved in the pathogenesis of H. pylori4. The East Asian CagA strains of H. pylori are known to have a significant correlation with gastric ulceration and cancer development5,6. VacA causes gastric epithelial cell damage by inducing vacuoles7. Sustained damage caused by CagA and VacA over decades result in chronic superficial gastritis and chronic ulceration.

Six-week old New Zealand White rabbits were purchased from Central Lab Animal Inc. (Seoul, Korea) and allowed to adapt to their new environment for two weeks before the first antigen inoculation. H. pylori 60190 bacteria (1 x 108/ml) were fixed in 0.2% formaldehyde/saline for 24 hr, washed with saline and then injected intravenously every week for a total of six weeks. Blood was allowed to clot at 4°C overnight and the serum isolated after centrifugation. Pre-immune serum was harvested prior to immunization. Collected anti-sera were purified and tested by ELISA

Used primers in this study.

In H. pylori, VacA is secreted via the type Va secretion system (T5aSS) apparatus. The cytoplasmic protein SecA facilitates the ATP-driven translocation of bacteria proteins out of the bacterial plasma membrane7,15,16. Therefore, VacA secretion is considered to be secA-dependent. We tested whether the intracellular accumulation of VacA after C3G treatment was due to decrease in secA expression. Due to a lack of SecA-specific antibodies, we examined for secA expression by RT-PCR analysis. RT-PCR analysis of C3G treated H. pylori showed decreased expression of secA (Fig. 2) whereas the other three anthocyanins had no effect. In addition, we found no changes in vacA expression in C3G treated bacteria supporting the notion that C3G prevented vacA secretion by inhibiting the secA-dependent pathway. It has been reported that CagA secretion occurs via the type IV secretion system (T4SS) apparatus17,18,19 and that CagA secretion is in part secA-independent20. In our studies we found that cagA expression was unaffected by C3G treatment (Fig. 2). Consistent with these observations, we found the possibility that C3G inhibits CagA secretion by inhibiting the sec-dependent pathway partially21-24.

There is a positive correlation between consumption of anthocyanin-containing foods and disease prevention8-13. The potential disease-preventive actions of anthocyanins include antibacterial effects10,11, inhibitory effects on the development of peptic ulcers and gastric cancer8,9,12, or reduction in interleukin-8 secretion13. However, these studies used anthocyanins contained in crude extracts and thus the beneficial effects attributed to anthocyanins are unclear 8-13. In this study, we tested four different pure anthocyanins for their inhibitory effects on the biogenesis and secretion of H. pylori toxins. In conclusion, our data suggest that C3G inhibits secretion of CagA and VacA in H. pylori via down-regulation of secA expression. Given that black fruits and crops are an important source of C3G, consumption of these foods may be beneficial in reducing gastric inflammation or stomach cancer due to H. pylori infection. 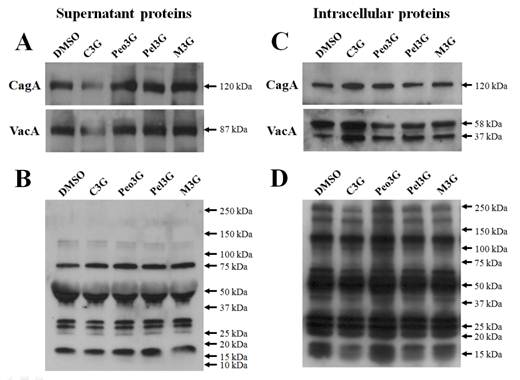 Effect of anthocyanins on secA transcription. H. pylori was cultured with 100 μM of anthocyanin in Mueller-Hinton broth/10% FBS for 3 days. After extensive washing, total RNA was extracted and cDNA synthesized. RT-PCR analysis was performed to assess expression of secA, cagA, and vacA. The galE (UDP-galactose 4-epimerase gene) was used as an internal control. No RT, no reverse transcriptase. A representative image from five independent experiments. 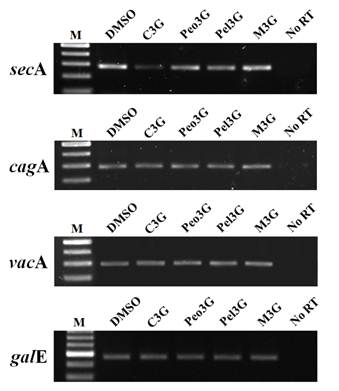