Background: Reports have been accumulating that genetic properties are predictive of clinical response after and/or toxicity during cancer chemotherapy, but little information is available concerning effects on long-term survival. In this study, 49 Japanese patients with esophageal squamous cell carcinoma (ESCC) were followed up for 5 years after treatment with a definitive 5-fluorouracil (5-FU)/cisplatin (CDDP)-based chemoradiotherapy (CRT), and the effects of genotypes of vascular endothelial growth factor (VEGF) were retrospectively revaluated in terms of prediction of long-term survival.

Conclusions: VEGF -634C/G is possibly predictive of long-term survival after treatment with a definitive 5-FU/CDDP-based CRT. Further clinical studies with a larger number of cases are needed to clarify the effects of this genotype.

A series of studies has been performed to find a marker predictive of clinical response 1 month after or severe acute toxicities during treatment with a definitive 5-FU/CDDP-based CRT in Japanese patients with ESCC [14-19]. The genotypes of vascular endothelial growth factor (VEGF), an endothelial cell-specific mitogen, were evaluated [16], since clinical reports suggested that their genetic variations have the potential to influence the expression of VEGF, and thereby the growth of tumors, metastatic spread, and response to treatment [20-23]; however, they failed to predict the response [16]. Obviously, the final goal of cancer chemotherapy is an improvement in long-term survival, not a short-term clinical response, so parameters predicting prognosis have been absolutely imperative. In this study, patients with ESCC were followed up for 5 years after treatment with a definitive 5-FU/CDDP-based CRT, and the effects of VEGF genotypes were retrospectively re-evaluated in terms of prediction of long-term survival.

Forty-nine ESCC patients treated with a definitive 5-FU/CDDP-based CRT at Kobe University Hospital, Japan, from October, 2003 to June, 2006 were followed up for 5 years. Survival time was defined as the time from treatment initiation to death from any cause or to the last date of confirmation of survival. Survival data were updated on June 25, 2011. The inclusion criteria for treatment basically included; 1) clinical stage T1 to T4, N0 or N1, and M0 or M1 according to the International Union Against Cancer tumor-node-metastasis (TNM) classification; 2) age less than 85 years; 3) an Eastern Cooperative Oncology Group performance status of 0 to 2; 4) adequate bone marrow, renal, and hepatic function; 5) no prior chemotherapy; 6) no severe medical complications; and 7) no other active malignancies (except early cancer). The tumors were histologically confirmed to be primary, and no patients with recurrence were included in this study.

A course consisted of the continuous infusion of 5-FU at 400 mg/m2/day for days 1-5 and 8-12, the infusion of CDDP at 40 mg/m2/day on days 1 and 8, and radiation at 2 Gy/day on days 1 to 5, 8 to 12, and 15 to 19, with a second course repeated after a 2-week interval [5, 6]. If disease progression/recurrence was observed, either salvage surgery, endoscopic treatment, or another regimen of chemotherapy was scheduled. The VEGF genotypes -1498T/C (known as -460T/C, rs833061) and -1154G/A (rs1570360) in the promoter region, -634C/G (known as 405C/G, rs2010963) and -7C/T (rs25648) in the 5' untranslated region (UTR), and 936C/T (rs3025039) and 1612G/A (rs10434) in the 3'UTR, were evaluated using peripheral blood and the TaqManR MGB probe-based polymerase chain reaction and confirmed by direct sequencing. This study was conducted with the authorization of the institutional review board and followed the medical research council guidelines of Kobe University. Written informed consent was obtained from all participants prior to genotyping. The associations with clinical response and severe acute toxicities were already reported [16], and their effects on long-term survival were evaluated in this study. It should be noted that the patients in this study were almost the same as those in the previous report [16].

The clinical response was evaluated as reported previously [5-9]. Briefly, a CR was defined as the complete disappearance of all measurable and assessable disease at the first evaluation, which was performed 1 month after the completion of CRT to determine whether the disease had progressed. The clinical response was evaluated by endoscopy and chest and abdominal computed tomography (CT) scans in each course. A CR at the primary site was given by endoscopic examination when all of the following criteria were satisfied on observation of the entire esophagus: 1) disappearance of the tumor lesion; 2) disappearance of ulceration (slough); and 3) absence of cancer cells in biopsy specimens. If small nodes of 1 cm or less were detected on CT scans, the recovery was defined as an “uncertain CR” after confirmation of no progression for at least 3 months. An “uncertain CR” was included as a CR when calculating the CR rate. When these criteria were not satisfied, a non-CR was assigned. The existence of erosion, a granular protruded lesion, an ulcer scar, and 1.2 w/v% iodine/glycerin-voiding lesions did not prevent an evaluation of CR. The evaluations were performed every month for the first 3 months, and when the criteria for CR were not satisfied at 3 months, the result was changed to non-CR. Follow-up evaluations were performed thereafter every 3 months for 3 years by endoscopy and CT scan. After 3 years, patients were seen every 6 months. During the follow-up period, a routine course of physical examinations and clinical laboratory tests was performed to check the patient's health.

All values reported are the mean±standard deviation (SD) without any explanatory notes. The Fisher's exact test, Cochran-Armitage test, Recessive and Dominant test and Log-rank test were used for evaluation of the effects of genotypes on long-term survival. P values of less than 0.05 (two tailed) were considered to be significant.

The frequencies of VEGF genotypes in the 49 patients are listed in Table 2. Among the 6 genotypes evaluated, only -634C/G affected survival (p=0.033, Fisher's; p=0.038, Cochran-Armitage). Figure 1 shows the association of VEGF -634C/G with survival. The median overall survival time (±SE) was 29.5±22.3 months for all patients, and more than 60 months, more than 60 months, and 13.0±9.0 months for the patients with CC-634, CG-634, and GG-634, respectively, but the genotype did not have enough power to predict survival (P=0.079, Log-rank). There were 7 patients with a CR, but a survival of less than 5 years. They died from myocardial infarction (N=1), sudden cardiac death after suffering from heart failure (N=1), acute myeloid leukemia that developed from myelodysplastic syndromes (N=1), factors not specified (N=2), oropharynx cancer (N=1), and tongue cancer (N=1). Their genotype frequency is listed in Table 3. Their genotype frequency was different from that for the other 42 patients (p=0.032, Fisher's).

The values are the mean±SD, with the range in parentheses.

VEGF genotypes and survival after treatment with a definitive 5-fluorouracil/cisplatin-based chemoradiotherapy in 49 Japanese patients with esophageal squamous cell carcinoma. 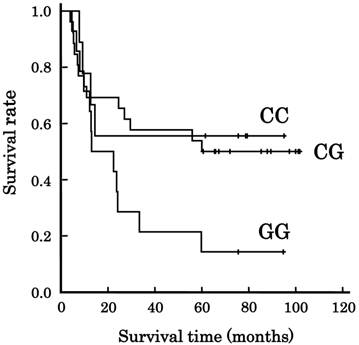 VEGF -634C/G genotype in the patients with a complete response, but survival of less than 5 years.

The VEGF-634C/G genotype frequency in the patients with a complete response (CR), but survival of less than 5 years, was different from others (Fisher's exact test, p=0.032 for genotype, p=0.018 for allele).

VEGF, an endothelial cell-specific mitogen, was discovered in the 1980s [24-29], and more than 20 years of investigation has clarified that VEGF inhibits the apoptosis of endothelial cells, increases vascular permeability, and promotes angiogenesis [30-32]. VEGF is a member of a structurally related VEGF family; VEGF (VEGF-A), VEGF-B, VEGF-C, VEGF-D, and placenta growth factor (PlGF) [30-32]. VEGF and related proteins are critical for development, growth and metastasis of tumors, and their expression levels have been demonstrated to be predictive of resistance to treatment [30-32]. Genetic polymorphisms in the promoter region, 5'UTR, and 3'UTR of the VEGF gene are associated with VEGF levels in plasma or tumors, and therefore can be diagnostic, prognostic, and predictive biomarkers for patients with tumors [20-23].

In this study, it was suggested that the VEGF -634C/G genotype is possibly predictive of long-term survival after treatment with a definitive 5-FU/CDDP-based CRT (Table 2, Figure 1). For this protocol, the cardiopulmonary late toxicities are a matter of debate, and the incidence of mortality was reported to be 3-12% for the patients with a CR [8, 9]. Recently, it has been suggested that the cardiopulmonary toxicities and subsequent malignancy observed in cancer survivors are presumably due to radiation and/or a certain class of anticancer drugs [33, 34]; however, the incidence of mortality due to cardiopulmonary late toxicities was 2% or less in two large randomized trials, in which CRT alone was compared with CRT with surgical treatment [11, 12]. Here, there were 7 patients with a CR, but survival of less than 5 years. Their VEGF -634C/G genotype was different from others, and 2 of 7 patients died from cardiopulmonary late toxicities. If we can obtain compelling evidence concerning the VEGF -634C/G genotype, we can optimize therapeutic treatment based on VEGF genetic profiling.

Angiogenesis plays a protective role in ischemic heart disease and myocardial infarction, and VEGF expression in the myocardium increases tentatively after hypoxia [30]. Acute and chronic hypoxias result in an increase in the secretion of VEGF into the lung [30]. We do not have enough data to clarify the role of VEGF in cardiopulmonary diseases, but VEGF genetic variations might be biomarkers for patients with cardiopulmonary diseases. In conclusion, VEGF -634C/G is possibly predictive of long-term survival after treatment with a definitive 5-FU/CDDP-based CRT. Further clinical studies with a larger number of cases are needed to clarify the effects of this genotype.

20. Hansen TF, Jakobsen A. Clinical implications of genetic variations in the VEGF system in relation to colorectal cancer. Pharmacogenomics. 2011;12:1681-1693