Osteoclasts are the key participants in regulation of bone mass. Low-magnitude high-frequency vibration (LMHFV) has been found to be anabolic to bone in vivo. This study aimed to investigate the effect of LMHFV on osteoclast differentiation in vitro. Murine monocyte cell line RAW264.7 cells in the presence of receptor activator of nuclear factor-kappaB ligand (RANKL) were treated with or without LMHFV at 45 Hz (0.3 g) for 15 min day−1. Tartrate resistant acid phosphatase (TRAP)-positive multinucleated cells (MNCs) and actin ring formation were evaluated. Expression of the osteoclast-specific genes, such as cathepsin K, matrix metallopeptidase-9 (MMP-9) and TRAP, were analyzed using real time-PCR. c-Fos, an osteoclast-specific transcription factor, was determined using Western blot. We found that LMHFV significantly decreased the number of RANKL-induced TRAP-positive MNCs (P<0.01), and inhibited the actin ring formation. The mRNA expression of the cathepsin K, MMP-9 and TRAP were down-regulated by LMHFV intervention (all P<0.001). Furthermore, LMHFV also inhibited the expression of c-Fos protein in the RANKL-treated RAW264.7 cells (P<0.05). Our results suggest that LMHFV can inhibit the RANKL-induced osteoclast differentiation of RAW264.7 cells, which give some new insight into the anabolic effects of LMHFV on bone.

Osteoclasts differentiate from the monocyte/macrophage haematopoietic lineage (1). They are the principal resorptive cells of bone, playing an important role in the formation of the skeleton and the regulation of bone mass (2). Excess osteoclast number and activity, relative to bone-forming osteoblasts, dictate the development of osteoporosis, which is characterized by low bone mass and microarchitectural deterioration of bone tissue, leading to bone fragility and the increased susceptibility to fracture (3).

Low-magnitude high-frequency vibration (LMHFV) is a form of non-invasive and biophysical intervention which provides cyclic loadings. LMHFV, when applied to the entire body of subjects, was found to be anabolic to bone in vivo , which may act through promoting bone formation (4,5), enhancing bone morphology (6), increasing bone strength (7), and attenuating bone resorption (5). LMHFV was clinically confirmed as a potential therapeutic approach to osteoporosis (4,5). Recently, it has been demonstrated that LMHFV did not enhance the osteogenic differentiation of bone marrow mesenchymal stromal cells (8). Whether LMHFV exerts its anabolic effects in vitro via regulating osteoclast differentiation remains largely unknown.

In the present study, we hypothesized that LMHFV could inhibit osteoclast differentiation. To test this hypothesis, we developed an innovative device generating vertical vibration, and subjected RAW264.7 cells in the presence of RANKL to vibration at a magnitude of 0.3 g and a frequency of 45 Hz. We then evaluated the osteoclast differentiation by analyzing the tartrate resistant acid phosphatase (TRAP) positive cell formation, actin rings formation, the expression of osteoclast-specific genes and the osteoclast-specific transcription factor, c-Fos.

The experimental regimens included 3 groups: (A) Control group, cells were incubated in phenol red-free α-MEM with 10% FBS-CS. (B) RANKL group, the differentiation medium consisted of phenol red-free α-MEM with 10% FBS-CS and 50 ng/ml recombinant mouse RANKL (rmRANKL) (R&D systems, Minneapolis, MN, USA). (C) LMHFV group, RAW264.7 cells cultured in the differentiation medium were subjected to LMHFV at 45 Hz, 0.3 g for 15 min per day, once a day. This vibration protocol was selected according to several previous studies (14-17).

The vibration apparatus is customly made for generating vertical vibration to cells. The apparatus consists of a manipulator and a vibrating platform to hold the culture dishes (Figure 1). The platform is moved by an electromagnetic actuator (not visible) and placed inside a 37 °C, 5% CO2, humidified air incubator. The vibration magnitude, frequency and vibration direction are controlled and monitored by the manipulator out of the incubator, and the preset settings in the manipulator are applied to the platform. When the culture dishes in the LMHFV group are plated on the platform, RAW264.7 cells are subjected to vibration. The control group and RANKL group are plated on similar platform and kept in the same incubator, but not subjected to vibration.

To examine the effect of LMHFV on osteoclast formation, RAW264.7 cells were incubated in 96-well cell culture clusters at a concentration of 3×103 cells/well for 4 days. Cells were washed with phosphate buffered saline (PBS) and fixed in paraformaldehyde 4% in PBS for 10min, following by incubating for 20 min at 37 °C in the TRAP staining solution (Sigma Aldrich, St. Louis, MO, USA). TRAP-positive multinucleated (≧3 nuclei and ≧10 nuclei) cells (MNCs) were numbered under microscopic examination (17). 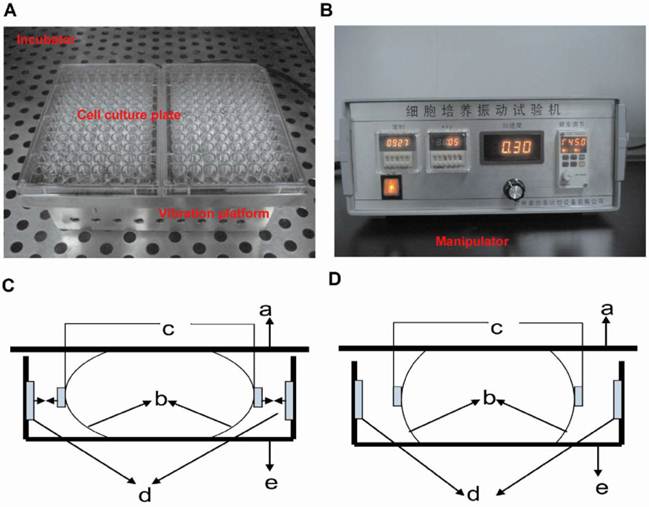 Actin ring is one of cell adhesion structures, which plays an essential role in osteoclast function (18). We found that the TRAP-positive MNCs formed actin rings in the RANKL group and LMHFV group. The number of the actin rings was decreased in the LMHFV group compared to that in the RANKL group. Moreover, the distance between the basolateral membrane facing the marrow space and the ruffled border (osteoclast height), an index of osteoclast polarization, was reduced in the LMHFV group (Figure 3). These results suggest that LMHFV disrupts actin cytoskeletal organization.

To investigate the effect of LMHFV on the expression of osteoclast-specific genes in the RANKL-treated RAW264.7 cells, we monitored the expression of osteoclast-specific genes including cathepsin K, matrix metallopeptidase 9 (MMP-9) and TRAP by real-time RT-PCR. As shown in Figure 4. The gene expressions of cathepsin K, MMP-9 and TRAP were low in control group, and were up-regulated in RANKL group. However, exposure of RANKL-treated RAW264.7 cells to LMHFV resulted in a significant down-regulation of cathepsin K, MMP-9 and TRAP expression (P<0.001). 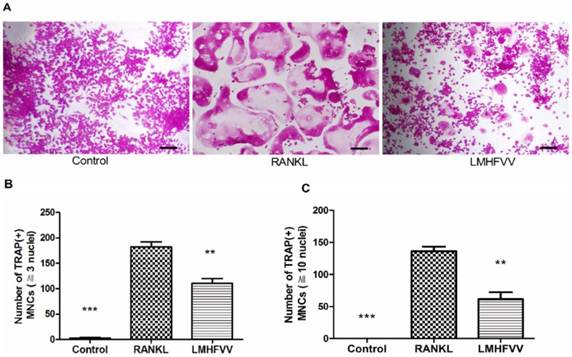 The c-Fos is considered as one of the most important osteoclast-specific transcription factors (19). We examined whether LMHFV modulated the transcription factors in RANKL-stimulated RAW264.7 cells using Western Blot analysis. As shown in Figure 5, RANKL treatment up-regulated expression of of c-Fos protein compared to that in the control group (P<0.05). However, LMHFV intervention significantly depressed the RANKL-induced up-regulation of c-Fos (P<0.05).

LMHFV prevented RANKL-induced expression of c-Fos in RAW264.7 cells. Cells in 6-well cell culture clusters were incubated for 3 days in control medium without RANKL (control group), differentiation medium (RANKL group), differentiation medium with LMHFV (LMHFV group), and then Western Blot to to measure the expression of c-fos protein. Values are shown as mean ± SD of three independent experiments. * #P<0.05 vs the RANKL group. 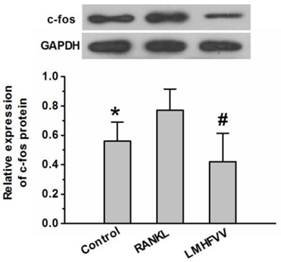 Osteoporosis results from the rate of bone resorption by osteoclast outpacing the rate of bone formation by osteoblast. The effect of LMHFV on preventing bone loss and anti-osteoporosis was well-documented in many clinical studies (4,5), which highlight the importance of determining the effect of LMHFV on bone cell differentiation. Previous studies demonstrated that LMHFV (0.3g, 60Hz ) did not enhance the osteogenic differentiation of mesenchymal stromal cells in the presence of osteogenic induction medium( 8), but LMHFV (0.3g, 30, 60, or 90 Hz) induced osteocyte-like MLO-Y4 cells to produce soluble factors that inhibited osteoclast formation (20). In this study, we found that LMHFV directly inhibited the RANKL-induced osteoclast differentiation of RAW264.7 cells.

Increased bone resorption by osteoclast leads to an imbalance in bone remodeling and osteoporosis (21). Cathepsin K, MMP-9 and TRAP genes typify the osteoclast lineage, and are related to the development of mature osteoclasts (22,23). To investigate the effect of LMHFV on osteoclast differentiation, we measured the number of TRAP-positive MNCs and expression of cathepsin K, MMP-9 and TRAP. We found that LMHFV significantly inhibited the RANKL-induced an increase of TRAP-positive MNCs and up-regulation of osteoclast-specific genes. The current results were supported by other studies which demonstrated that mechanical signals were involved in the inhibition of osteoclastogenesis (24,25).

Bone resorption activation is a process that multinuclear cells are recruited, adhere to bone and differentiate into a mature osteoclast, and then secrete lytic enzymes into sealing zone to absorb bone. The number of nuclei per osteoclast is positively associated with the resorbing capability (26). Actin rings and ruffled borders are necessary for sealing zones and bone excavation, which is an essential process for osteoclast function (18,27). TRAP and cathepsin K are the two main enzymes responsible for the degradation of bone mineral and collagen matrices (22). Moreover, MMP-9 facilitates migration of osteoclast precursors toward bone surface and initiation of bone resorption during differentiation (23, 28). The present study showed that LMHFV stimulation significantly inhibited cathepsin K, MMP-9 and TRAP expression in RAW264.7 cells assessed by real time-PCR, which was consistent with a decrease in the number of large TRAP-positive MNCs. Furthermore, we also demonstrated that LMHFV prevented the formation of actin rings. These data suggest that LMHFV inhibits the osteoclast activation.

In conclusion, our data suggest that LMHFV inhibits the RANKL-induced osteoclast differentiation of RAW264.7 cells and down-regulates c-Fos expression. These findings give some new insight into the anabolic effects of LMHFV on bone. LMHFV provides the basis for a non-pharmacological approach to increase bone mass and reduce osteoporosis.

This work was supported in part by a National Natural Science Foundation of China (No.81000785) , a Science and Technology Planning Project of Guangdong Province, China (No.2008B030301343), and a President Grant of Nanfang Hospital, Southern Medical University, China (No.2009B023).

26. Piper K, Boyde A, Jones SJ. The relationship between the number of nuclei of an osteoclast and its resorptive capability in vitro. Anat Embryol (Berl). 1992;186:291-9