Objective: Brain-derived neurotrophic factor (BDNF) is a neurotrophin which modulates neuronal survival and proliferation. Recently, plasma BDNF is associated with inflammatory conditions. The present study was to investigate the changes of the plasma BDNF level in hemodialysis patients and to evaluate the relationship between the plasma BDNF and uremic inflammation.

Method: We measured the plasma BDNF, serum IL-2, IL-4, IFN-γ and TNF-α in hemodialysis patients and control subjects. In addition, we investigated the associations of the plasma BDNF with clinical or biochemical parameters.

Results: The plasma BDNF level was significantly higher in hemodialysis patients than in the control subjects (median, 312.3 vs. 630.3 pg/ml, p < 0.05). In subgroup analysis, hemodialysis patients with diabetes showed higher values of the plasma BDNF than the patients without diabetes. However, there were no significant differences in age and gender subgroups of the hemodialysis patients. The logBDNF was positively correlated with hs-CRP and IFN-γ, and negatively correlated with serum albumin. In multivariate regression analysis, the logBDNF was independently associated with the presence of diabetes (β-coefficient = 0.399, p = 0.041) and IFN-γ (β-coefficient = 0.538, p = 0.003).

Brain-derived neurotrophic factor (BDNF) is a member of the nerve growth factor family and it exerts its effects by binding to the tropomyosin kinase B receptor. Among the neurotrophins, BDNF is the most abundant and widely distributed in the central nervous system. BDNF is a basic dimeric protein, and its subunit is a 13.5 kDa (119 amino acids) molecule. It is an essential mediator of neuronal activity and synaptic plasticity in both the central and peripheral nervous systems, and it enhances the growth and maintenance of several neuronal systems by serving as a neurotransmitter modulator (1). It is well known that the BDNF expression increases following an insult to the central nervous system (CNS). Although many studies have demonstrated a relevant role of BDNF for regulating neuroprotection, recent findings have suggested that changes of plasma BDNF level, regardless of nervous system, are also associated with several inflammatory or metabolic derangement conditions (2-4).

Decrease of renal function induces accumulations of circulating cytokines, advanced glycation end product and pro-oxidants, which contributes to the pro-inflammatory milieu in patients with chronic kidney disease. Uremic inflammation is associated with various adverse outcomes in hemodialysis (HD) patients, such as cardiovascular disease, malnutrition and neurological disorders. While many studies have investigated inflammatory cytokines as a reflection of uremic condition in HD patients, there is no information about the peripheral changes of BDNF in patients undergoing HD as far as we are aware.

In this cross-sectional study, we investigated the changes of the plasma BDNF levels in HD patients and evaluated the potential correlations between this peptide and selected parameters of uremic inflammation.

Using a cross-sectional design, we studied 60 randomly selected, stable uremic patients who were undergoing HD for more than 6 months and 30 healthy control subjects who were matched for age and sex. All those joined in this study provided us a written informed consent. This study was approved by the hospital ethics committee (Incheon St. Mary's Hospital, The Catholic University of Korea). Patients with known hypersensitivity to the dialysis membrane, signs of infection, malignancy, severe liver disease, autoimmune disease, previous history of renal transplantation, treatment with drugs known to interfere with the immune system were excluded.

Following an overnight fast, blood samples were collected from both HD patients and control subjects. For the HD patients, the samples were obtained from the arterial side at the time of needling before the dialysis session. Fasting blood was withdrawn into a lithium heparin vacuum tube and immediately centrifuged at 3,800 rpm for 10 minutes. The plasma was stored at -70℃ until it was thawed for assay. Human plasma BDNF was assayed using the DuoSet ELISA Development System (Catalog number: DY248, R&D Systems, UK). All the assays were performed in duplicate using the manufacturer's recommended buffers, diluents and substrates. All assays had a detection range from 20 to 4000 pg/ml. The intra-assay and inter-assay coefficients of variation were 5.4% and 9.8%, respectively. The concentrations of the samples in each plate were calculated according to each standard curve and the dilution factor. The cytokine assays for human serum IL-2, IL-4, tumor necrosis factor-α (TNF-α) and interferon-γ (IFN-γ) were performed using the highly sensitive HS-ELISA Development System from R&D Systems, Abingdon, UK. All the assays were performed according to the manufacturer's instruction. The intra- and inter-assay coefficients of variation were 5.6 and 7.08%, respectively, for IL-2, IL-4, and TNF-α. The intra- and inter-assay coefficients of variation were 6.7 and 9.2% for IFN-γ (5).

The data with continuous variables and a normal distribution were presented as means ± standard error, and those without a normal distribution were presented as the median with ranges. The Kolmogorov-Smirnov test showed that the BDNF values did not fit a standard distribution curve. Therefore, statistical analyses were performed using an appropriate non-parametric test, the Mann-Whitney U-test. The chi-square test was used to determine the differences in categorical variables. The correlation between selected variables was determined by Spearman's correlation analysis. The relationship between BDNF levels and other clinical or biochemical parameters was also analyzed by multiple regression analysis. The statistical significance level was set at p < 0.05. SPSS 15.0 software was used for these analyses. 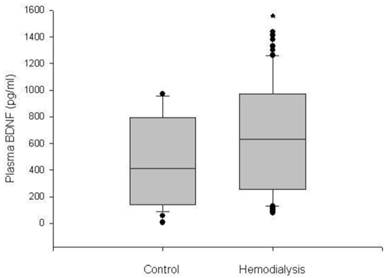 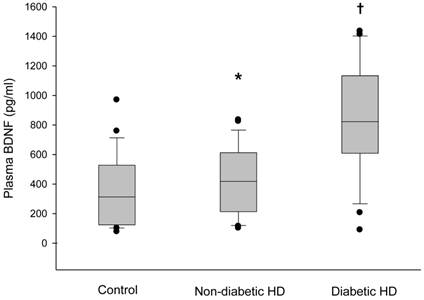 Association between logBDNF and the presence of diabetes or IFN-γ in hemodialysis patients; Multivariate regression analysis.

According to many other studies, BDNF has been shown to protect the CNS under a variety of conditions. Previous work demonstrated that patients with fibromyalgia and depression have increased serum BDNF concentrations (6). It has also been shown that plasma BDNF concentrations were elevated in drug users or in patients with chronic stress (7,8). Recently, apart from nervous systems, there are several reports showing the associations of plasma BDNF with systemic or peripheral inflammatory conditions, such as diabetes, acute coronary syndrome, atherosclerosis or rheumatoid arthritis (2-4).

In the present study, the increase of the BDNF to be more marked in the HD patients with diabetes. Previous animal research demonstrated that subcutaneous administration of BDNF reduced food intake and ameliorated impaired glucose tolerance in diet-induced obesity mice (9). Furthermore, systemic BDNF treatment normalized fasting blood glucose, hemoglobin A1c and lipid profiles (10,11). BDNF heterozygous knockout (BDNF+/-) mice showed obesity and insulin resistance (12). Therefore, in the present study, it is possible that plasma BDNF may increase in HD patients with diabetes to compensate hyperinsulinemia and insulin resistance. However, there is a controversy as to whether the serum BDNF level is higher in diabetics than in non-diabetics who are not undergoing dialysis treatment. A previous study showed that serum BDNF level was higher in newly diagnosed type 2 diabetic patients than in normal controls (2). On the other hand, Fujinami et al. reported that serum BDNF levels were significantly lower in patients with advanced type 2 diabetes compared to control subjects (13). In our results, most of diabetes in dialysis group were not newly diagnosed, and might be more complicated diabetes. Therefore, the presence of diabetes alone could not explain the elevated level of the plasma BDNF in the present study. Our results also showed that the plasma BDNF level in non-diabetic HD patients was higher than that of control subjects. There may be many other factors including uremic inflammation to increase the plasma BDNF level in diabetes of the HD patients. Further investigations are needed to clarify these points.

It is well known that the uremic status is a constant inflammatory condition. Recent studies demonstrated that pro-inflammatory cytokines, such as IL-1, IL-6, TNF-α and IFN-γ showed higher value. Anti-inflammatory cytokine levels including IL-2, IL-4, IL-5 and IL-12 were decreased in dialysis patients (15). In the present study, the serum cytokine levels were increased in the HD patients but not in controls. In addition, the HD patients showed a significantly positive relationship between the plasma BDNF and the serum IFN-γ in multivariate regression analysis. The association of the plasma BDNF with inflammatory conditions has been reported. Increases of BDNF expression in inflamed bladder tissues and in airway epithelium during allergic airway inflammation have been demonstrated (16,17). Furthermore, Grimsholm et al reported that plasma BDNF level in rheumatoid arthritis patients showed higher values than in healthy controls, and anti-TNF treatment lead to a decrease in the plasma BDNF level (4). It is unclear that higher plasma BDNF in the HD patients was associated with uremic inflammation. It has been shown that activated antigen-specific T cells, B cells, and monocytes produced BDNF (18). Uremic inflammatory state is characterized by enhanced immune system which involves both T lymphocytes and monocytes (19). Therefore, it is postulated that chronic inflammatory condition and enhanced immune system is associated with the production of BDNF, which may explain the reason that the plasma BDNF level in non-diabetic HD patients was higher compared to that of control subjects in this study.

BDNF is found in both human serum and plasma. Serum contains platelets, and it has been well established that large amount of BDNF is stored in platelets (20). It was previously reported that serum BDNF level was found to be 200-fold higher than plasma level (21). Thrombin, collagen, the Ca++ ionophore A23187 and shear stress stimulated a rapid release of BDNF from platelets (20). Thus, the difference between serum and plasma levels of BDNF could explain the amount of BDNF stored in platelets, and plasma BDNF may reflect circulating levels rather than the levels stored in platelets (22). Only a few data are available on plasma BDNF levels and it is difficult to determine the significance of BDNF of plasma according to disease state. Nofuji et al. recently reported that the serum BDNF concentration was found to significantly change according to exercise, however, the plasma BDNF level was not (23). On the other hand, Piccinni et al. showed in their study with depressed patients that while the plasma BDNF levels increased in parallel with the clinical improvement after one month antidepressant treatment, they could not detect any significant change in serum BDNF levels in spite of the treatment (24). In the future, studies will be required to determine the action and regulation of plasma BDNF in peripheral blood according to disease state.

There are some limitations in this study. First, this is a cross sectional study, therefore, longitudinal observation is needed to assess the relationship between this peptide with uremic inflammatory conditions and clinical outcomes. Second, this study is limited by its small sample size. Further study with a large dialysis population would add further information about the role of BDNF as markers of inflammation and malnutrition including hs-CRP and serum albumin. Third, in this study, we measured only the plasma levels of BDNF, and this was the major limitation of the study. The source of plasma BDNF and its biological activity were not investigated in the present study. Future studies are needed to determine which source of BDNF - platelets, plasma, serum, or whole blood - provides the most reliable biological marker of patients with HD. Finally, we did not provide data on the assessment of nervous system functions in the patients and the other neurotrophins such as nerve growth factor or neurotrophin-3. The evaluation of these parameters in the HD patients may help to explain the change of the plasma BDNF level in uremic condition.