Department of Obstetrics and Gynecology, College of Medicine, The Catholic University of Korea, Seoul, Korea.

Background: The purpose of this research is to discover whether measurement of cervical length and cervical volume at term is helpful in predicting the onset of labor in VBAC candidates.

Methods: Transvaginal sonographic evaluations of the cervixes of pregnant women who desired to undergo VBAC were performed between 36 - 40 weeks gestation. Clinical information such as labor onset time, gestational age at delivery and delivery mode was gathered from medical records.

Conclusion: Measuring cervical length is helpful in predicting the onset of spontaneous labor within 7 days and posterm delivery in VBAC candidates.

Vaginal birth after cesarean (VBAC) has a 2.1 times higher risk of perinatal mortality and hypoxic brain damage than a planned cesarean section [1]. This is mostly related to uterine rupture. The VBAC uterine rupture rate is 0.2~ 9%, and the rate is higher in induced labor than spontaneous labor [2-4]. Predictions of labor onset in VBAC candidates will assist doctors in their obstetrical plans, and as a result will lead to a reduction in unnecessary induced labor and reduced uterine rupture risk. This will also allow the mother and family members to receive more information and thereby diminish potential anxiety.

The purpose of this research is to discover whether measurement of cervical length and cervical volume at term is helpful in predicting the onset of labor in VBAC candidates.

This is an observational cohort study. The study was conducted between March 2007 and July 2011 in singleton pregnant women who wanted to try VBAC at St. Mary's Hospital in The Catholic University, Seoul, Korea. This study was approved by the Institutional Review Board (SC11RISI0210). Transvaginal sonographic evaluations of women's cervixes were performed between 36 - 40 gestational weeks. Exclusion criteria included a history of cervical conization, patients who had a uterine malformation, patients with painful regular uterine contractions and premature rupture of the membrane. Sonographic examinations were performed with a 3-8 MHz 3D vaginal transducer (ACCUVIX XQ-3D, Medison, Seoul, Korea). Pregnant women were examined in the dorsal lithotomy position with an empty bladder. Cervical length was measured from the external os to the internal os along the cervical canal. If the cervical canal was not arranged in a straight line, the cervical length was divided into two or more lengths, which were then added together. After measuring cervical length, the same transvaginal probe was used in 3D mode to measure cervical volume. The cervix was scanned in 3D mode and divided into 15 parallel sections. Each sectional plane was manually drawn using the roller ball cursor of the system. Once all contours were drawn, the volume of the cervix was calculated automatically. All sonographic examinations were performed by one operator. We gathered clinical information such as labor onset time, gestational age at delivery and delivery mode from medical records.

ROC curve to predict the onset of spontaneous labor and delivery within 7 days after measurement. 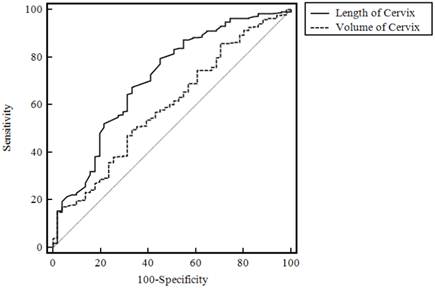 Combined cervical length and volume ROC curve and length-only ROC curve to predict the onset of spontaneous labor and delivery within 7 days of measurement. 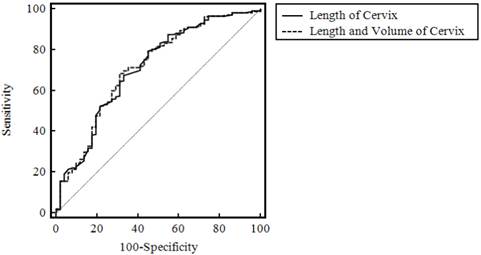 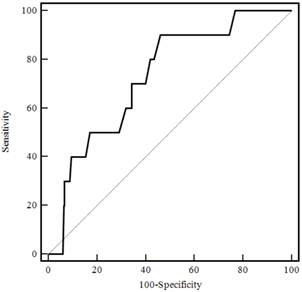 Approximately 73.6 - 75.5% of women who opt for VBAC will have a vaginal delivery [5, 6]. If successful, VBAC has been shown to be associated with a lower incidence of maternal febrile mortality, need for blood transfusion and hysterectomy. However, those with failed VBAC have a higher risk of scar rupture, blood transfusion, infection and neonatal mortality and morbidity than those who undergo a planned cesarean section [7]. Spontaneous labor is associated with high success rates (80-74%), while induced labor is associated with low success rates (67%) [6]. The risk of rupture is nearly 3 times higher in women who undergo induced labor [8]. Because of this, the choice of induced VBAC labor causes a heavy psychological burden on pregnant women and their doctors. When obstetrics problems arise, accurate predictions of the onset of spontaneous labor may enable the clinician to provide precise information to the mothers and reduce the need for intervention.

Previous studies regarding the detection of labor onset by ultrasonography or by cervical length only did exclude women that had a previous history of cesarean section [12-15]. With the popularity of 3D ultrasounds, it is possible to more easily and precisely measure cervical volume [16, 17]. Much research is being published on cervical volume using 3D imaging [18-20], but only one study has reported the value of cervical volume for predicting the onset of spontaneous labor at full term [14]. However, this study's focus was on postterm pregnant women (≥ 41+5 gestational weeks) and the number of participants was quite small (n=60). We measured the cervical length and volume and compared the efficacy for prediction of spontaneous labor at full term in VBAC candidates. We found no additional benefits of measuring cervical volume in addition to length.

Currently, many studies regarding VBAC safety are being conducted. Labor induction elevates the risk of VBAC. Measuring cervical length at term is useful in predicting the onset of spontaneous labor within 7 days and postterm pregnancy in VBAC candidates. Predicting the onset of spontaneous labor and postterm pregnancy in VBAC candidates is an assessment of risk. The present study was the first attempt to stratify risk in women by measuring cervical parameters in VBAC candidates. A limitation of our study is that setting precise cut-off values for use in clinical settings is quite difficult (Tables 2 and 3). We expect that cervical length data could be used as part of a risk stratification system coupled with other clinical factors and we plan to develop such a system in future research.