To evaluate the feasibility of cell transplantation to treat bradyarrhythmia, we analyzed the in vivo integration and pacing function after transplantation of mHCN4-modified rabbit bone marrow mesenchymal stem cells (MSCs) into the rabbit left ventricle free wall epicardium. In our investigation, we injected MSCs transduced with or without mHCN4 into the rabbit left ventricle free wall epicardium. Chemical ablation of the sinoatrial node was performed and bilateral vagus nerves were sequentially stimulated to observe premature left ventricular contraction or left ventricular rhythm. We found that the mHCN4-transduced MSC group had a significantly higher ventricular rate and a shorter QRS duration than that of the control and EGFP group. Furthermore, the mHCN4-transduced MSCs, but not the control cells, gradually adapted long-spindle morphology and became indistinguishable from adjacent ventricle myocytes. The modified MSCs showed pacing function approximately 1 week after transplantation and persisted at least 4 weeks after transplantation. In conclusion, a bradyarrhythmia model can be successfully established by chemical ablation of the sinoatrial node and sequential bilateral vagus nerve stimulation. The mHCN4-modified rabbit MSCs displayed evident dynamic morphology changes after being transplanted into rabbit left ventricle free wall epicardium. Our studies may provide a promising strategy of using modified stem cell transplantation to treat bradyarrhythmia.

Hyperpolarization activated cyclic nucleotide gated cation channels (HCN) are voltage-gated ion channels that structurally resemble K+ channels, with a six-transmembrane domain topology, including a pore region that conducts ion flow[1]. HCN channels are encoded by four separate genes, HCN1-4, which are crucial for a range of electrical signalling, including cardiac and neuronal pacemaker activity [2-3]. In mammals' sinoatrial node, they are the molecular basis of pacemaker current (If), the presence of HCN1 and HCN4 isoforms has been verified in human sinoatrial node cells [4-6].

HCN genes are becoming important candidate genes in investigations using biological pacemakers to treat bradyarrhythmia, which were based on gene therapy and cell transplantation techniques [7-10] .In cloned 4 HCN gene subtypes, HCN4 is mainly expressed in the cardiac specific conduction system [11-15]. Previously, 3 degree atrioventricular block models by radiofrequency catheter were established on a large animal model like dogs or pigs, and HCN2 was the target gene [14, 16-17]. In this study, we established a rabbit bradyarrhythmia model based on chemical ablation of the sinoatrial node and sequential bilateral vagus nerve stimulation, and evaluated the integration and pacing function after mHCN4-modified rabbit BMSCs were transplanted into left ventricle epicardium [18-20]. This study provides new insights and methods to explore biological pacing therapy.

BMSCs were separated and purified with Percoll separating medium by density gradient centrifugation and adherence method. Bone marrow was obtained from 2 month-old Japanese white rabbits (Experimental Animal Center, The Third Military Medical University) via intertrochanteric aspiration under aseptic conditions and washed twice by Percoll density gradient centrifugation (2,000 rpm for 10 minutes and 1,000 rpm for 10 minutes). The monocytes in middle white cloudy layer were harvested and washed twice with DMEM (GIBCO, USA) at 1,000 rpm for 5 minutes. Cells were cultured and propagated in DMEM containing 10% fetal bovine serum (Hyclone, USA) at a concentration of 10×108/ml. Transduction and antibiotic selection were performed using established methods in our lab [15]: Rabbit MSCs (p=4) were plated into a 24-well plate at 2×104/well, a supernatant containing pMSCV-mHCN4-EGFP virus was mixed with medium at 1:1 and added into rabbit MSCs together with polybrene (Sigma, USA) at a final concentration of 2 μg/ml. Twenty-four hours after transduction puromycin at 2 μg/ml (Sigma, USA) was added and cells were selected for 10~15 days to get transduced rabbit MSCs. Immunofluorescence was used to determine the gene expression level in the control group, EGFP group, and mHCN4 group. Cells were prepared at a suspension of 1 ×106 cells/ml and incubated on ice less than 5 minutes before injection.

In vivo animal experiments and electrocardiogram

Forty-eight male and female 2 month-old Japanese white rabbits, 1.8~2.5 kg, were randomized into a control group (n=8, microinjected with 0.2 ml medium), EGFP group (n=20, injected with 0.2 mL pMSCV-EGFP transduced cell suspension), and mHCN4 group (n=20, injected with 0.2 mL pMSCV-mHCN4-EGFP transduced cell suspension). Animals were general anesthetized by 3% sodium pentobarbital (30 mg/kg via ear vein), and marked with 5-0 blue prolene sutures (Ethicon, USA) on the left ventricle free wall after median sternotomy to mark the injection region. The needle was inserted 2~3 mm at an angle of 30° in the adjacent site with a microsyringe, and 0.2 mL allochthonous cell suspension was injected into epicardium at two sites after aspiration without blood. At 3 days, 1 week, 2 weeks and 4 weeks after transplantation, 2, 5, 5 rabbits were selected from each respective group and bilateral neck vagus nerves were separated under anesthesia. After chemical ablation of the sinoatrial node, bilateral vagus nerves were sequentially stimulated to create a bradyarrhythmia model (stimulation voltage 4~6 V, stimulation frequency 10~20 Hz). Premature left ventricular contraction or left ventricular rhythm was determined. After that, tissues were harvested through thoracotomy. Body surface electrocardiogram (ECG) was recorded throughout the experiments (RM6280C Multichannel electrophysiology signal acquisition system, Chengdu Instruments, Sichuan).

All data was presented as mean ± SD. T test and ANOVA analyses were performed with SPSS 10.0 software, P<0.05 was considered significant.

Measurement of pacemaker current and activation curve in transduced cells

In vivo experiments and electrocardiogram

A: If curve of cells in the mHCN4 group; B: No If can be detected in cells of the EGFP group; C: Tail current in mHCN4 cells when polarized to +20mV; D: If activation curve in mHCN4 cell. 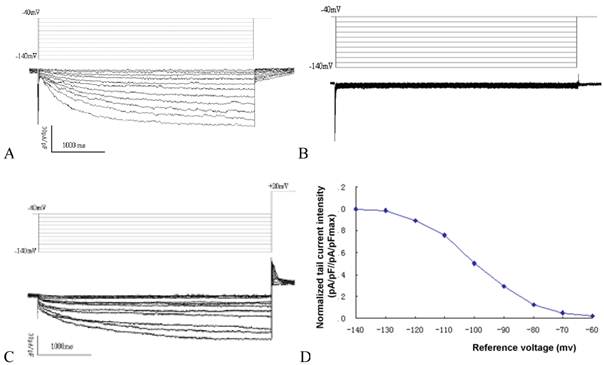 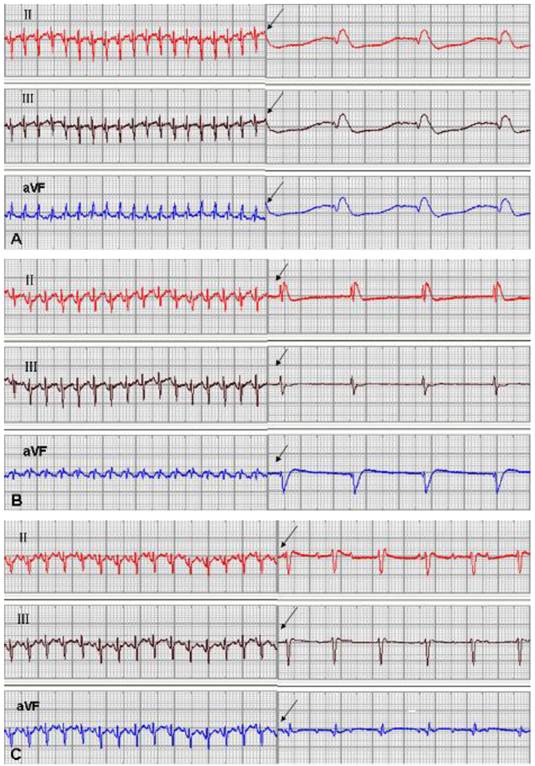 HE and DAB staining 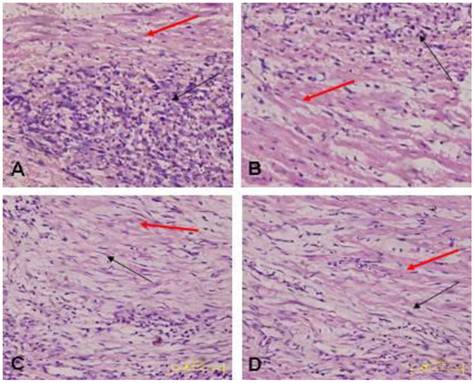 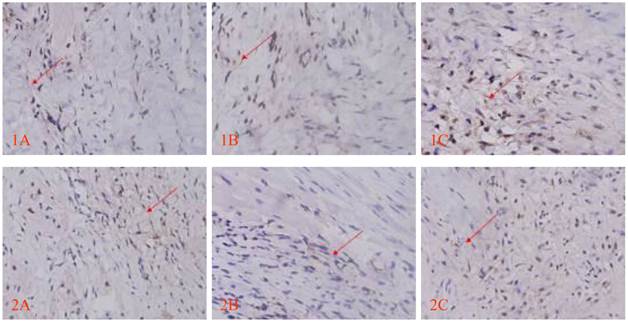 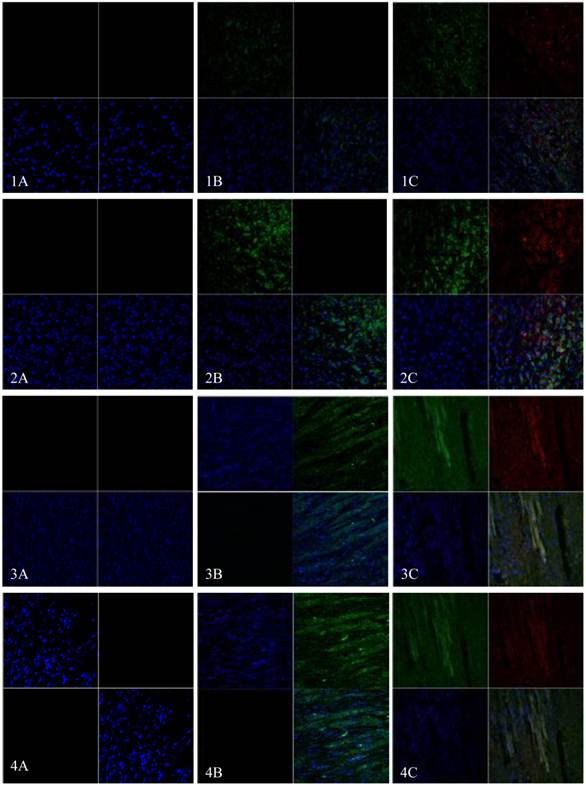 Many advances have been made in the biological pacing field, and a few attempts have been made on in vivo biological pacing. Various cells with high autorhythmicity combined with infectious solution were transplanted into the atrial/ventricle free wall or transduction bundle, with an atrioventricular block model by radiofrequency catheter; transplanted cells derived ectopic rhythm could be determined. Histology also detected gap junctions formed between transplanted cells and host cells [16, 21-22]. Most of these studies were performed on bradyarrhythmia created in large animal models, such as dogs or pigs, by radiofrequency catheter. This method requires advanced equipment, is difficult to manipulate, and not suitable for small animal models [14, 23]. Additionally, electronic cardiac pacemaker implantation was usually required to keep the animal alive, which made the experimental procedure more complex and increased the cost. The heart is controlled by vagus nerves on the left and right side. The most abundant site vagus nerve is located in the atrial node, the second in the atrioventricular node. Stimulation of the heart vagus nerve can induce a release of acetyl choline from the postganglionic neurofiber endings, which affect the cholinergic receptor on the atrial node, the atrioventricular node, or cardiomyocytes membrane, leading to negative chronotropic and dromotropic action. Stimulation on the right vagus nerve at a certain frequency can decrease the heart beat and even lead to asystole. Stimulation on the left vagus nerve usually slowed down atrioventricular conduction. Intense stimulation lead to ventricular block, even complete conduction block in the atrioventricular junction region. In vivo pacing experiments on rabbits can effectively reflect therapy, and make it relatively easy to perform surgery, feed, and observe after surgery. Due to the relatively higher basic heart rate, direct vagus nerve stimulation is not ideal. We first reduced the basic heart rate by chemical ablation of the sinoatrial node and then stimulated bilateral vagus nerves. This enabled us to analyze the pacing function of biological pacing cells during a ventricular block, and restore the sinus rhythm after observation. The animal can be fed for a long time without electronic cardiac pacemaker implantation. This model is relatively simple, costs little, is suitable for big and moderate animals, and is more versatile.