In 1987 Aggarwal described post-reperfusion syndrome (PRS) as the sudden development of hypotension occurring within 5 minutes of liver reperfusion, lasting at least 1 minute in duration, and commonly associated with persistent bradycardia [1]. A recent study of PRS during liver transplantation showed that patients who developed PRS required longer mechanical ventilation times, longer intensive care unit stays, and were 2.5 times more likely to require re-transplantation than those without PRS.[2] However, despite over three decades of research, PRS is still a common surgical complication occurring in approximately 20-30% of all liver transplants.[3, 4] More recently, PRS has also been reported during several other surgeries including cardiopulmonary bypass, ischemic limb reperfusion, aneurysm repair, and most recently renal transplantation at largely unknown frequencies.[5-7]

Although the exact etiology of PRS remains unknown, PRS should not be confused with ischemic-reperfusion injury, which is a phenomenon largely isolated to the ischemic organ itself and occurs over days. In contrast, PRS is a systemic phenomenon that by definition occurs within 5 minute of organ reperfusion and has been shown to adversely affect not only the re-perfused organ, but also have profound effects on the autonomic and cardiovascular systems.[3] Give the chronological proximity of the syndrome to reperfusion, initial theories about the etiology of PRS centered on the hypothesis that a sudden relative hyperkalemia, acidosis, and/or hypothermia develops at reperfusion due to a sudden shift of cold preservation solution, potassium, lactate, or calcium into systemic circulation from the transplanted organ. However, this theory was significantly weakened by a prospective study showing that the only statistically significant correlation between a patient's core temperature, potassium levels, calcium levels, arterial blood-gas tensions, serum pH, hemodynamic parameters, or PRS was a decrease in systemic vascular resistance (SVR). This lack of correlation between the studied variables and PRS suggests that the agent or agents responsible for the systemic vasodilatation remained unknown.[3] Another study showed that the cardiac preload in PRS patients was significantly decreased as compared to non-PRS cohorts despite equivalent left ventricular ejection fractions on trans esophageal echocardiography.[8] Finally, increased levels of neutrophil and macrophage activation with concomitant anaphylatoxin formation has been identified in patients experiencing PRS compared to controls suggesting that an immunologic cause may be at least partially responsible for the syndrome.[9]

Extensive research has also been done to prevent PRS from occurring including the use of alternative preservation solutions,[10] transplant flushing just prior to reperfusion,[11] various alterations in the reperfusion sequences and rates,[5, 12] as well as pre-treatment of patients with various drugs.[13] Although the results these interventions have been mixed, the overall prevalence of PRS during liver transplantation has remained relatively constant.[10]

After Institutional Review Board approval, data was retrospectively collected on 150 consecutive patients undergoing renal transplantation in an academic hospital.

Identification of PRS was based on a drop in mean arterial pressure (MAP) of at least 15% within 5 minutes of donor kidney reperfusion and lasting at least 1 minute. Baseline recipient variables collected included age, gender, race, left ventricular ejection fraction (LVEF), deceased donor vs. living donor transplantation, race, creatinine at time of transplant, hypertension, diabetes mellitus, a history of coronary artery disease, beta blocker or calcium channel blocker use within 24 hours, preoperative potassium levels and hemoglobin levels. Donor variables collected included race, terminal creatinine, and the use of machine perfusion preservation of the donor organ prior to transplantation. In addition, the quality of donor organs were classified into one of three United Network for Organ Sharing (UNOS) defined categories including donors after cardiac death (DCD) who are donors who have suffered devastating and irreversible brain injury that may be near death, but did not meet formal brain death criteria. Second, expanded criteria donors (ECD) were defined as donors over age 50 that have high blood pressure, a creatinine above 1.5 mg/dl and/or the donor passed away from a CVA. Finally standard criteria donors (SCD) were defined as donors who did not meet DCD or ECD criteria. Follow up statistics included delayed graft function, graft failure within 6 months and 1 year, mortality, and hospital days post-transplant.

Preoperatively, all patients underwent immunosuppressive induction with a combination of alemtuzumab 30mg and mycophenolate 720 mg, as well as premedication with 25 mg of diphenhydramine, 500 mg of methylprednisolone, 650 mg of acetaminophen and 20 mg of famotidine. Just prior to restoration of graft reperfusion by renal arterial clamp removal, all patients were also given furosemide 40 mg, mannitol 12.5 g and 500 mg of methylprednisolone. Only two surgeons performed all of the renal transplants under study.

All study variables were analyzed descriptively between the two cohorts (PRS vs. no PRS). Univariate analyses of patient characteristics between the two outcome cohorts were also conducted. Numbers and percent's were provided for dichotomous and polychotomous variables and means and standard deviations were provided for continuous variables. A Student's t test was used to compare all continuous variables and a chi-square test or Fischer's exact test was used for all categorical variables. Univariate analysis was used to estimate odds ratios and the associated 95% confidence intervals (CI). Multiple regression analysis was also performed on all statistically significant variables in order to determine independence. A two-sided P value of less than 0.05 was considered statistically significant. All analysis was performed using Graph Pad Prism version 5.0 (La Jolla, CA) and SAS.

Baseline characteristics of patients with and without PRS 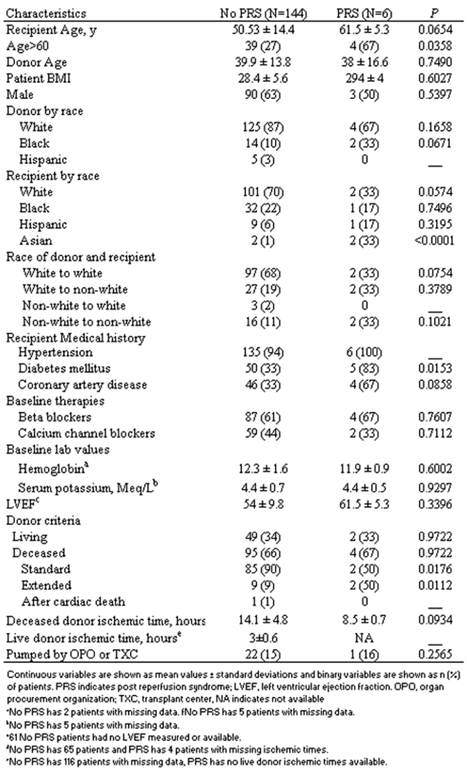 Although post-reperfusion syndrome has been extensively studied in liver transplantation, this is the first study to investigate the prevalence of PRS during renal transplantation. 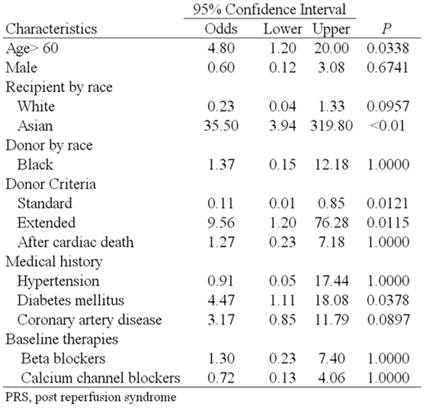 Short term follow up characteristics of patients with and without PRS

A second reason for decreased reporting may be due to the less severe hypotension seen during renal transplantation. During liver transplantation, any drop in MAP less than 30% is considered only mild PRS. In our study, the average drop in MAP was only 24%, and only 1 of the 6 patients had a drop >30%. The reason we chose a drop in MAP of >15% as the cutoff relates to the proposed mechanism of PRS itself. Since the prevailing theory regarding the cause of PRS centers around an unknown agent or agents being released from the transplanted organ at reperfusion, it stands to reason that a kidney, which weighs less than 1/10th that of a transplanted liver, would contain less of this substance.[14] However, one should not assume that the less dramatic hypotension of renal transplant PRS automatically correlates with less severe morbidity. Although hypotension lasting greater than 1 minute might be expected to cause some degree of adverse consequences, most research to date suggest that the post-reperfusion hypotension is simply a marker of a more serious underlying immunological, inflammatory or other unknown process occurring at a molecular level.[3, 10] The fact that this study also showed increased rates of 6 month graft failure and increased post-operative hospital stays in PRS cohorts also seems to support this hypothesis.

This study is also the first to suggest that advanced age, Asian race, extended criteria donor kidneys, and diabetes mellitus might be risk factors for the development of PRS. One plausible explanation for diabetes as a risk factor may be found in a separate study showing that patients diagnosed with autonomic dysfunction had an increased prevalence of PRS as compared to those without autonomic dysfunction. Although that study performed rigorous testing to diagnose autonomic dysfunction prior to transplantation, the presence of diabetes, especially longstanding, uncontrolled diabetes severe enough to cause renal failure may be a surrogate marker for predicting autonomic dysfunction and subsequent PRS in surgical patients.[15]

Interestingly, not only was an ECD associated with an almost 10 fold increase in the risk for developing PRS, but a recipient's age over 60 years was also associated with an increased risk of developing PRS. Since one of the criteria for ECD's is an age ≥60, this would seem to suggest that some characteristic of advanced age might explain both risk factors.

The fact that Asian race appeared to be an independent risk factor for the development of PRS was one of the most unexpected findings of the study since Asian race has never previously been reported as a risk factor. Although it is certainly possible that this finding is completely coincidental, the fact that transplant complications related to race are already well known to transplant medicine suggests that this finding warrants further investigation. Furthermore, if this variable is validated as a true risk factor for PRS, it may give credence to the hypothesis that PRS is caused by an immunological reaction that perhaps is more likely to occur in Asian recipients.

Although coronary artery disease showed only a strong trend toward statistical significance, we believe that this may have reached statistical significance in a larger patient population. Aggarwal et al. showed that patients experiencing PRS had a significantly lower cardiac output 30 seconds after reperfusion despite concomitant decreases in SVR and mean arterial pressure. Although the reason for this is unclear, a history of CAD may be a marker of patients with decreased cardiac reserve due to significant coronary artery stenosis. Generally speaking, hypotension leads to a systemic vasconstrictive response and a concomitant attempt at increasing cardiac output by increasing heart rate and/or contractility. If systemic vasoconstriction fails, as in PRS, pre-existing coronary stenosis may attenuate the hearts ability to increase coronary blood flow enough to meet the new cardiac demands. Since bradycardia is relatively common in classic PRS, increased contractility and coronary blood flow become even more essential to meeting cardiac demand.[2]

One of the largest limitations of this study is its relatively small sample size and retrospective design. Not only are odds ratios less powerful than risk ratios, but the collection of data such as a numerical representations of LVEF and cold ischemic times were limited by sporadic documentation as is typical of retrospective studies. Our cutoff for a drop in MAP being >15% is also a potential criticism. Although we considered using both higher and lower cutoffs, ultimately we felt that a cutoff higher than 15 mmHg would decrease the sensitivity and introduce false negatives due to the significantly size difference between a kidney and liver transplant, while a lower cutoff would potentially introduce false positives due to normal background variation in blood pressure. A final limitation is that although renal transplant related PRS likely occurs by a similar mechanism to that of liver transplantation, a prospective rather than retrospective study investigating SVR and cardiac output is needed in order to confirm or refute this hypothesis.

9. Tomasdottir H, Bengtson J.P, Bengtsson A. Neutrophil and macrophage activation and anaphylatoxin formation in orthotopic liver transplantation without the use of veno-venous bypass. Acta Anaesthesiol Scand. 1996;40(2):250-5