Currently laparoscopic cholecystectomy (LC) and common bile duct exploration (LCBDE) has become the standard surgical procedure for cholecystolithiasis and choledocholithiasis. During the operation cystic duct and vessels are usually controlled by Hem-o-lok clips. However, recently we found clips dropping into CBD in 8 patients during fiberoptic choledochoscope 2-3 months after operation. Therefore, there is risk that clip can migrate during postoperative period, which probably lead to hemorrhage and bile leakage after LC if this occurs within postoperative few days, or even cause recurrent stone in CBD. So, using of Hem-o-lok clips may be not a safe method to control vessels and cystic duct during LC. To our knowledge, this condition has not previously been reported. In our view, other more effective and safe method ligating cystic duct and gallbladder vessels, such as effective and convenient thread knotting method, should be investigated.

LC and LCBDE, which are usually performed together, is the golden standard surgical procedure for patients with cholecystolithiasis and choledocholithiasis simultaneously, which leads to good cosmetic effect and rapid recovery1. Skeletonization of Calot's triangle and controlling of gallbladder vessels and cystic duct successfully are the key points of the LC. As we all know, currently Hem-o-lok clip is generally used to ligate gallbladder vessels and cystic duct during LC. Besides, it is reported that Hem-o-lok clip is safe to be used in other operations2. Actually, The patients with T-tube who ever underwent LCBDE need to do the CBD radiography at postoperative 3 months in order to confirm whether there are residual or recurrent stone in the CBD before removing T tube. However, in recent two years from 2009 November to 2011 October, during which time totally 1600 patients underwent LCs, we found that in 8 patients who ever underwent LC and LCBDE clips were found in CBD during fiberoptic choledochoscope, which is a surprising and dangerous finding for both surgeons and patients. The incidence is 0.5%. Hence, we report our findings as an alert here to share some experience with laparoscopic surgeons.

Eight patients, 6 males and 2 females (mean age of 56.3 years; range of 35 to 76 years), who underwent LC and LCBDE, were included in this retrospective, non-randomized trial. The informed consent was obtained from all patients. Postoperative 2-3 months later they went back to out-patient clinic for radiography via T-tube with contrast agent. Consequently, filling defects were found in radiographies in all patients. As a result, all patients were admitted into hospital in order to do fiberoptic choledochoscope. The patient took supine position, with Pethedine intramuscularly injected, then T-tube was removed from sinus. Skin around tube were disinfected with Iodine. Fiberoptic choledochoscope (Olympus, Tokyo, Japan) was inserted into sinus and CBD, and rough CBD inner wall attached with inflammation floc was found. Clips and stones were seen in CBD, which is shown in Fig. 1, and removed with stone-retrieving basket (Olympus, Tokyo, Japan) successfully. Of all patients, in 6 cases there was a single clip in CBD, and 2 clips in other 2 cases. After the procedure was completed, a drainage tube, which was usually removed next day, was dwelled into CBD sinus to drain the fluid in the CBD out of body after no residual stone in CBD was confirmed. The patients were discharged the next day without complications.

Clips and stones in CBD were revealed by fiberoptic choledochoscopy. 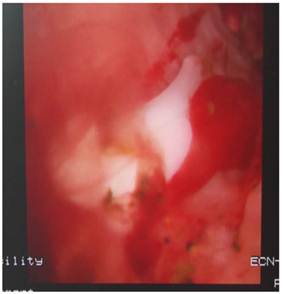 Finding clips in CBD indicates that clip is not so safe to be used to control vessels and cystic duct during LC and LCBDE, which contradicts with some research outcome that indicates that clip is safe to be used to control vessels and ducts2,3. As a matter of fact, our experience shows that clip can drop. In our view, the reason may be rejection response of human body. Meantime, the anatomic basis of cystic duct ligation site close to CBD can possibly lead to clip to drop into CBD by rejection response mechanism, then clip was excluded to outside via T-tube. Similarly, Delibegovic et al4. described that the mildest postoperative inflammatory changes were seen in the stapler group, followed by the Hem-o-lok group during laparoscopic appendectomy, and inflammation is more frequent after the use of resorbable endoloops. Nevertheless, actually clip could not be excluded out of body from sinus because of friction between clips and CBD. In 1995 Kitamura et al5. reported metal clips migrating into CBD. In addition, in China Hu SY6 also reported that Titanium clip was ever found in T-tube after LC and LCBDE. We think that this is caused by less friction of smooth metal clip. However, we hypothesize if clip drops within few days at early postoperative period, the outcome will be second operation, even deadly because of bleeding and bile peritonitis. This will aggravate pain for patients and increase medical expense. Conflicts and malpractice will even happen in some cases.

In addition, we found in all cases there are stones in CBD, but by reviewing all cases retrospectively only 5 cases have residual stones in intrahepatic bile duct, the CBD stones in other 3 patients have ever been removed completely. Hence, we hypothesize that clip may be a factor which induces the recurrent stone formation although there is no statistical significance because of less cases. However, we will continue to summarize our experience in the ensuing similar cases to acquire the conclusion which has statistical significance.

What's more, it is reported that dropped clip can cause bile duct obstruction, which only could be cured by second operation7. In addition, the price of a clip is about US$30 in China, and each patient needs 3-4 clips, which gives rise to an economic burden to patients, which could be avoided by using other methods. Therefore, based on these factors, we begin to consider the disadvantages of clips. We should investigate other effective and safe methods instead of clip during LC and LCBDE. We consider thread ligation is still a kind of cost-effective and safe method, which can ligate vessels and cystic duct safely, economically and minimally invasively.

Currently, besides LCBDE and T-tube drainage, ERCP (Endoscopic Retrograde Cholangiopancreatography) is also a common and effective method to treat CBD stones worldwide. However, which method is better depends on the size and number of stones. If the stone is very big and numerous, and the diameter of CBD is more than 1.2cm, LCBDE is superior to ERCP because stones could be completely extracted. However, if the diameter of CBD is less than 1.2cm, ERCP is often used to extract stones, otherwise the CBD stricture would happen if we perform CBD exploration in this condition. Nowadays laparoscopic surgery is increasingly replacing conventional open operation due to its less invasive effect and rapid recovery8. Especially in recent years the single port access laparoscopic procedure is accepted by more and more patients owning to its better cosmetic effect compared with three or four ports LC. As a result, on behalf of patients we must search a kind of safe and effective ligation method to control vessels and bile duct.

Hem-o-lok is not a so safe ligation method during LC that we should search a more effective and safe way to control cystic duct and vessels.