Obturator hernia is a rare pelvic hernia with incidence of 1%. It's a significant cause of intestinal obstruction in emaciated elderly women. Delayed diagnosis and surgical intervention contributed to its relatively high morbidity and mortality. We present a typical case of obturator hernia with positive Howship-Romberg sign and Hannington-Kiff sign. The diagnosis was confirmed by spiral CT preoperatively. During the emergency laparotomy, the incarcerated intestine was reduced and removed. Obturator foramen was repaired by simple suture. The patient recovered uneventfully and no recurrence occurred during the follow-up. The obturator hernia should be included in the differential diagnosis if clinically suspected. Early diagnosis and prompt surgical treatment are essential to reduce the morbidity and mortality associated with obturator hernia.

Obturator hernia is a rare pelvic hernia with relative high morbidity and mortality. The hernia sac passes through the obturator foramen, following the path of the obturator nerves and muscles. Here we present a typical case of obturator hernia which was diagnosed by spiral CT preoperatively and the emergency operation was performed successfully.

A 78-year-old woman was sent to our emergency department because of recurrent abdominal pain and constipation for 10 days. The colicky pain was getting worse in recent nearly six days, accompanied with nausea and vomiting. She also complained of intermittent right hip pain with radiation to the medial aspect of the thigh for several months, which worsened with extension, abduction, or internal rotation of right leg. Paracetamol was orally taken irregularly to relieve the pain. She gave birth to 6 kids and denied any history of previous abdominal surgery. The body weight was 38Kg. Physical examination revealed a distended abdomen without tenderness or muscle guarding. Bowel peristalsis was visible, while bowel sounds was absent. No mass was palpated in the bilateral groin. Rectal examination was negative. The adductor reflex of right thigh was absent. The white blood cell count was 13.1×109 /L with 90.6% neutrophils. Serum electrolytes were within normal ranges. The abdominal plain film revealed small intestine obstruction. Enhanced CT scan demonstrated obvious intestinal obstruction with a low density mass in the right obturator canal area (Figure 1). The diagnosis of right obturaor hernia was confirmed and emergency laparotomy was performed. During the operation, a 10cm loop of small intestine was revealed herniated into the right obturator canal (Figure 2). Proximal intestine dilated severely and distal intestine collapsed. The incarcerated intestine was reduced and a perforated lesion was noted. Intestinal segmentectomy and simple suture closure of obturator foramen were performed. The patient was recovered uneventfully and discharged one week after operation. No recurrence was noted within one and a half years of follow-up. 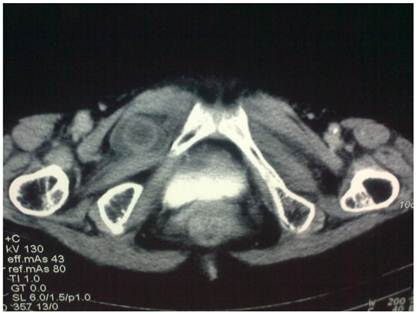 An incarcerated small intestinal loop at right obturator foramen was noted during laparotomy. 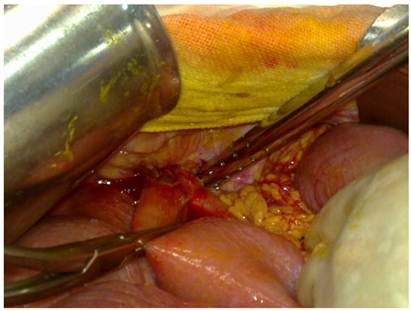 Obturator hernia was first described by Ronsil in 1724 [1]. The incidence is nearly 1% of all hernias [2]. With the nickname “little old lady's hernia”, it usually occurs in multiparous and elderly emaciated women due to a wider pelvis and enlarged obturator canal. The other risk factors include chronic obstructive pulmonary disease, chronic constipation and ascites. The cardinal clinical symptom is acute intestinal obstruction. In this case the patient had a positive Howship-Romberg sign, which was caused by the intermittent irritation of the obturator nerve. It was reported that 15~50% patients of obturator hernia may have positive Howship-Romberg sign [1]. In her early course the patient was misdiagnosed as an orthopedic problem and treated with paracetamol. To exam the thigh adductor reflex might be valuable for differentiating osteoarthritis from obturator hernia. The loss of the adductor reflex, named as Hannington-Kiff sign, was observed on the affected side, while the patellar tendon reflex was intact on the same side [3].

The early diagnosis is challenging when the symptoms and signs are nonspecific. Various imaging examinations have been applied to establish the diagnosis, including ultrasonography, herniography, CT scan and so on. Among them, CT scan has superior sensitivity and accuracy [4]. In our case, preoperative diagnosis of obturator hernia was confirmed by spiral CT scan and emergent operation was performed. Unfortunately, bowel resection was inevitable due to delayed diagnosis for 10 days. Chang et al concluded that the duration of symptoms was one of the major factors affecting the rate of bowel resection. The rapid evaluation must be accomplished within hours but not in days [5].

The only treatment for obturator hernia is surgery. There are a variety of operative approaches including inguinal, retropubic and transperitoneal approach [6,7]. laparotomy via low midline incision was applied in this case because it had advantages of better exposure and facilitation of bowel resection when necessary. Recently, Laparoscopic surgery for obturator hernia became another alternative approach [8]. The advantages of laparoscopic surgery include less postoperative pain, shorter hospital stay and lower complications. However, it is usually reserved for the nonstrangulated hernia because of more challenging techniques and longer learning curve.

Methods of repair include simple suture closure, closure of the obturator with adjacent tissue, and mesh replacement during laparotomy [9]. Many authors preferred a simple closure of the hernial defect with one or more interrupted sutures, in case of bowel resection [6, 8]. In this case we did the simple suture and outcome was satisfying.

In conclusion, it should be kept in mind that obturator hernia is a rare but significant cause of intestinal obstruction especially in emaciated elderly women. Detailed history taking and physical examination provide diagnostic clue for suspected obturator hernia. CT scan is valuable to establish preoperative diagnosis. Early diagnosis and prompt surgical treatment are essential to reduce the morbidity and mortality.

The work was granted by educational department of zhejiang province (No.Y200907098).