Abdominal Multiple Splenosis Mimicking Liver and Colon Tumors: A Case Report and Review of the Literature

Splenosis is not an uncommon disease. However, it is often misdiagnosed as malignant tumors, and then the patients underwent unnecessary operations. Unfortunately, it is very difficult to diagnose it prior to operation. We report a rare case of a 49-year-old female patient with liver and colon splenosis, misdiagnosed as liver and colon tumors, and summarize experience how to diagnose it preoperatively according to literatures. We come to conclusion that in patients who ever underwent splenectomy especially owning to trauma, and were found mass in abdomen, clinicians must consider the existence of splenosis, and take some measures, such as scintigraphy with (99m) Tc labelled heat-denatured erythrocyte rather than biopsy, to diagnose it correctly to prevent unnecessary operations.

Splenosis is a condition in which ectopic spleen tissue may be found in the peritoneal cavity or in other unusual locations due to heterotopic auto-transplantation and implantation of splenic tissue after spleen trauma or splenectomy1,2. It is a benign condition that is often misdiagnosed as a tumor. Therefore, knowledge of this condition is important when evaluating patients with a previous history of splenic trauma or splenectomy and newly appearing peritoneal lesions. This concept is firstly presented by Von Kuttner in 1910 during autopsy. It is reported that splenosis could be found in thorax, abdomen and pelvic, subcutaneous tissues and so on3,4,5,6. Here we report a case of multiple splenosis in abdominal cavity including liver and colon sites that was not reported in published studies, and review related literatures.

A 49-year-old female patient complained of subxiphoid pain with fatigue for half a month. The patient reported history of trauma and splenectomy which was performed 20 years ago. On physical examination no positive sign was noted. She was admitted into our hospital for further work up because abdominal mass was found by ultrasound in local hospital. The patient had no family history of related diseases. Then the patient underwent regular preoperative laboratory test in our hospital. Her white blood cell was 7.2×109/L (reference rang 4x109/L -10x109/L), haemoglobin was 116g/L (reference range 110 g/L -150 g/L), blood platelet was 129×109/L (reference range 100×109/L -300×109/L). The results of prothrombin time (PT), activate part blood coagulation time (APTT), thrombin time (TT), fibrinogen (FIG) and live function test (LFT) were in normal range. AFP is in normal range. Both hepatitis B and C virus test were negative. EKG and CXR were both normal. Contrast CT imaging (Figure 1,2) demonstrated multiple space-occupying masses of liver and colon which were considered as malignant tumors. 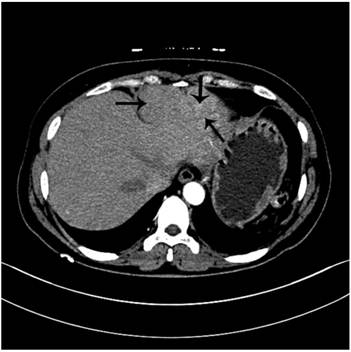 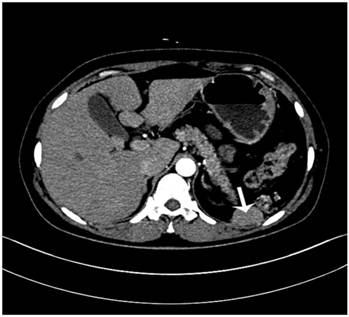 After proper preoperative preparation the patient underwent exploratory laparotomy. During the operation moderate adhesion between organs and peritoneum was found, and 3 red soft masses, with the size of 5cm×5cm; 3cm×3cm; 1.5cm×1.0cm respectively, were found between liver and diaphragm below xiphoid. Three masses grew with blood supply from abdominal wall at the surface of liver where obvious dent could be seen, which was shown with arrows (Figure 3). The masses were sent to rapid pathological diagnosis. After further exploration on the mesentary of splenic flexure of colon another similar mass whose size was about 3cmx2cm was found. The mass was not resected since lastly the pathological diagnosis was spleen tissue. The patient was discharged at 7th postoperative day without complications. She was asymptomatic during the follow up period of 4 months. PLT count were in normal range after twice CBC test, and the mass on the mesentary of splenic flexure of colon did not grow according to ultrasound results.

Autotransplantation spleen tissues were revealed during the operation, and dent on the surface of liver could be seen. 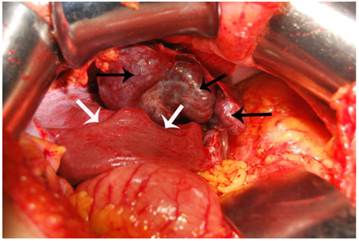 As we all know, for malignant tumors, contrast CT imaging often shows quick-in and quick-out property. The abdominal masses of this patient were diagnosed as malignant tumors by contrast CT imaging because at artery phase the density of mass margin increased quickly while at venous phase the density decreased quickly, which shows the characteristic of malignant tumors. Therefore, we performed the operation. Unfortunately, finally we recognized that we misdiagnosed the disease which was actually ectopic spleen tissues.

As a matter of fact, we did not realize this disease prior to operation because we never heard of it. As a result, we performed the operation, and we figured out actually the tumors of liver and colon were spleen tissues. Then we reviewed some literatures, and acquired that this condition is splenosis, which often occurs in patients who ever underwent splenectomy7,8.

Intraabdominal splenosis is a generally asymptomatic entity incidentally diagnosed after the completion of CT scan or MRI, even surgical procedure9. Splenosis means that spleen fragment implants into other sites randomly, not spleen bed, to grow and form small spleens which have the physical function similar to normal spleen. It can eliminate the aged blood cells and maintain normal immunological function which is very important to attack infection. Splenectomy history and findings in operation are the key points to diagnose this disease8. Nevertheless, the gold standard for splenosis depends on pathological diagnosis which can be obtained by needle aspiration prior to operation10. In recent years, other studies report that preoperative diagnosis of splenosis should be acquired by using of nuclear imaging studies such as the (99m)Tc heat-damaged erythrocyte study rather than computed tomography-guided biopsy or invasive surgery11,12. The performance of scintigraphy with (99m)Tc-labelled heat-denatured erythrocytes allows the noninvasive diagnosis of this entity and avoids more aggressive diagnostic techniques such as fine needle aspiration or laparotomy. Because this splenic tissue may be partially or fully functioning and therefore may have some beneficial immune function for the patient, the management of this entity should be conservative. To be more specific, radioisotopic scintigraphy with (99m)Tc labelled heat-denatured erythrocytes is the technique with the greatest specificity in the demonstration of splenic tissue. In contrast, Turkmen et al13. suggest that splenosis could be detected by Tc-99m HMPAO-labeled leukocyte scintigraphy. Besides this, Ishibashi et al.14 reported that on magnetic resonance imaging (MRI), the lesions were hypointense on T1-weighted images and hyperintense on T2-weighted images. After administration of superparamagnetic iron oxide (SPIO), the lesions showed decreased signal intensity but remained slightly hyperintense relative to liver parenchyma on T2-weighted images. (99m)Tc-labeled Sn colloid scintigraphy revealed multiple areas of increased activity consistent with the lesions on the CT and MRI scans. In addition to the history of splenic trauma and left hemothorax, SPIO-enhanced MRI and radionuclide scintigraphy, which can demonstrate phagocytic ability in the ectopic splenic tissue, were useful for confirming the diagnosis.

Although It is reported that this small spleen tissues could be found in abdomen, thorax, pelvic and subcutaneous tissues and so on3,4,5,6, there is no report that splenosis was found in liver and colon simultaneously. For this condition, splenosis may present with different signs and symptoms, such as abdominal pain, gastrointestinal bleeding, or intestinal obstruction depending on the size and location of ectopic spleen15,16. Actually most patients are asymptomatic. And it has no adverse effect to human body. Unfortunately, splenosis in special organs, such as liver and gastrointestinal tract, is prone to be misdiagnosed as malignant tumors17,18. Then the patient underwent unnecessary operation consequently, which will increase pain and medical expense to patients. So, as long as they are asymptomatic, they do not require surgical treatment. However, there is exception. Barbaros et al. reported a case of idiopathic thrombocytopenic purpura recurrence due to splenosis 5 years after the initial laparoscopic splenectomy19. And they performed laparoscopic treatment of splenosis for patient successfully.

To date, the mechanism of splenosis is still unclear. Kwok et al. hypothesized that based on the susceptibility of the sFplenic erythropoiesis response to hypoxia and the inevitability of hypoxia caused by aging or pathological changes, the two events caused the occurrence of the intrahepatic splenosis, the migration of the erythrocytic progenitor cells via the portal vein following traumatic splenic rupture, and the local induction of erythropoiesis by hypoxia20. However, our case is perihepatic splenosis rather than intrahepatic one.

The clinical findings shown in this case is rare. Liver and colon splenosis were found simultaneously. She did not feel fierce abdominal pain and other malaise, but she was afraid the tumors were malignant. Prior to operation, we did not realize this disease so we performed the operation for patients. However, during the operation we found that the masses were spleen tissues. After the operation we diagnosed it as splenosis correctly after we reviewed some related literatures. This diagnosis could be confirmed by her previous history of splenectomy. Therefore, the whole treatment process of this patient indicates that the past history of patients is very crucial for clinicians to diagnose the disease correctly prior to operation. In addition, this experience gives us some alert that if abdominal mass was found in patients who underwent splenectomy, we should consider the existence of splenosis. In this way some unnecessary operations could be avoided, and save medical expense for patients. The more important thing is that since small spleens are preserved for patients, this can reduce the risk of infection and maintain normal immunological function of patients.

In patients with abdominal tumors who ever underwent splenectomy, with or without traumatic history, clinicians should raise suspicion of the presence of intraperitoneal splenosis, and recognize the key features suggesting a diagnosis of splenosis, order appropriate imaging studies and scintigraphy, and avoid unnecessary invasive diagnostic procedures and unnecessary operation.