Endometrial cancer is representative of hormone dependent gynecologic cancers [1]. However, attempts to treat female hormone dependent cancers with anti-hormonal treatments have not been effective, except in early stage cancers. Although the leading cause of treatment failure was drug resistance, the mechanisms by which these tumors become resistant to chemotherapeutic agents have not been clarified. Tumors in patients resistant to anti-cancer drugs were recently reported to show increased expression of clusterin, which acts as a cytoprotective protein of cancer cells [2].

The gene encoding clusterin is located on chromosome 8p21-p12 [3]. Clusterin is a 75-80 kDa disulfide-linked heterodimeric protein that exists as several subtypes due to alternative splicing [4-7]. Clusterin is also known as TRPM-2 (testosterone repressed prostate message- 2), SGP-2 (sulfated glycoprotien-2), and Sp-40 and Apo-J (apoliprotein J) [4-7]. When the entire gene is expressed, each clusterin molecule is expressed as an approximately 60 kDa precursor, which, after glycosylation, is converted to an approximately 80 kDa secretory protein [8]. When exon 2 is spliced out during transcription, however, the protein synthesized is approximately 55 kDa in size. Although the function of clusterin has not been determined, it is reported to act as a protective protein [9]. Clusterin is expressed in various cells and tissues and has been shown to function in cell adhesion and aggregation, complement inhibition, lipid transport, membrane protection and endocrine secretion [10, 11]. Clusterin overexpression has been reported in bladder, cervical, breast and prostate cancers [12-15]. For example, in an animal model of androgen independent prostate cancer, simultaneous treatment with paclitaxel and clusterin antisense-oligonucleotide enhanced the drug response rate [16]. Moreover, suppression of clusterin gene expression in prostate cancer cells was found to inhibit their proliferation and to enhance response to anticancer drugs [17]. However, there have been few studies on the effects of female hormones on clusterin expression in hormone dependent tumors. We therefore evaluated the correlation between clusterin expression and paclitaxel resistance in hormone dependent endometrial cancer cell lines, as well as the effects of female hormones on clusterin expression.

Using PCR premixture (Promega, Madison, WI, USA), cDNA sequences encoding estrogen receptors α and β, progesterone receptors AB and B, and clusterin were amplified by PCR; a β-actin cDNA sequence was amplified as a loading control (Table 1). The PCR products were electrophoresed in 1-2% agarose gels, and the amount in each band was quantitatively analyzed using the Quantity One program (Bio Rad, Hercules, CA, USA). Each band was normalized relative to the β-actin band in the same sample.

Sequence of primers and PCR conditions.

Proteins were extracted from cells using a lysate buffer (Intron Biotechnology, Gyeonggi-Do, Korea) and quantified by the Bradford assay. Aliquots containing of 20 μg protein were electrophoresed on 10% SDS-PAGE gels for 2 hours at 80 V. Proteins were transferred to PVDF membranes (Bio Rad) for 1 hour at 15 V using a Semi-Dry transfer unit (Bio Rad). Following preincubation with a blocking agent, the membranes were incubated with a monoclonal antibody to clusterin (Millipore, Temecula, CA, USA), followed by incubation with species specific secondary antibody. As a loading control, the membranes were incubated with a monoclonal antibody to β-actin (Cell Signaling, Danver, MA USA). Protein expression was developed using ECL (Enhanced chemiluminescence; Thermo Fisher Scientific) and analyzed with the Quantity One program (Bio Rad.)

6. Treatment with female hormones and paclitaxel

Cells were incubated with estrogen or progesterone, as above, for 24 hours. Paclitaxel was added and the cells were cultured for an additional 48 hours. XTT assays were performed, and cell survival rates were calculated.

Groups were compared using Student's t-tests. A P value less than 0.001 was defined as statistically significant. 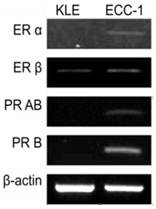 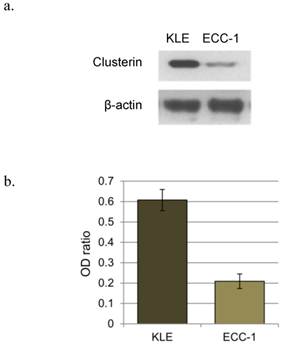 2. Clusterin expression and resistance to paclitaxel

3. Inhibition of clusterin expression using siRNA and resistance to paclitaxel

4. Changes in clusterin expression during treatment with female hormones

When KLE cells, which express the ER β receptor, were treated with 200 nM and 2000 nM estrogen for 24 hours, the expression of clusterin protein increased 23.0% and 22.3%, respectively, compared with untreated cells. Treatment of ECC-1 cells, which express the ER α and β receptors, with these same concentrations of estrogen increased the expression of clusterin protein by 46.9% and 133.5%, respectively (Figure 4).

5. Effects of female hormones and paclitaxel on cell survival rates

Western blotting of clusterin, β-actin protein. Each cell line after treatment with the β estradiol (0, 2, 20, 200, 2000nM) were Western blotting. a. KLE, b. ECC-1. The graph shows the ratio between the clusterin and β-actin band density.

Western blotting of clusterin, β-actin protein. Each cell line after treatment with the progesterone (0, 2, 10, 20, 100μM) were western blotting. a. KLE, b. ECC-1. The graph shows the ratio between the clusterin and β-actin band density. 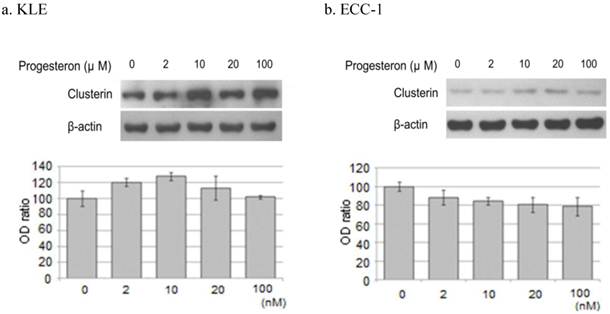 Comparison of cell survival ratio of hormone treatment alone and hormone with paclitaxel treatment. a. β estradiol, b. progesterone. (*; P<0.001) White bars are the hormones that a single treatment. Gray bars are treated with hormone and paclitaxel. 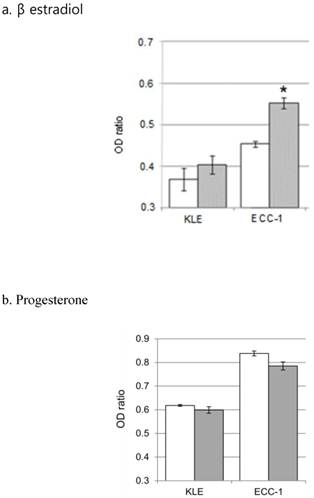 Although clusterin was first isolated in 1983 from the testicular tissues of a lamb [10], its function has not yet been clearly identified [18]. Its presence in various tumors suggests that clusterin inhibits cell-killing during cellular transformation and metastasis [19-23]. In contrast, the expression of clusterin is reduced in some cancers, suggesting that this protein may have pro-apoptotic activity [24]. Its activity as both a pro- and anti-apoptotic protein has suggested that clusterin may be very important in the carcinogenic process. When expressed in secreted form, clusterin functions as an anti-apoptosis agent [25], whereas, expressed in the nucleus, it functions as a pro-apoptosis factor [26]. Overexpression of clusterin during the treatment of patients with prostate, renal, breast and lung cancers has been closely associated with resistance to anti-cancer drugs, including paclitaxel, doxorubicin and cisplatin, and radiation treatments [17, 27-30].

The level of expression of clusterin protein was reported to be higher in the endometrioid than in the papillary type of endometrial cancer, with estrogen found to be associated with the regulation of clusterin protein [31]. Clusterin was shown to have anti-apoptotic activity in breast cancer function [32] and to be associated with growth and metastasis in metastatic breast cancer [33].