Study objective: To compare the effect of normal saline (NS), lactated Ringer's, and Plasmalyte on the acid-base status of dehydrated patients in the emergency department (ED).

Method: We conducted a prospective, double-blind, randomized trial of consecutive adult patients who presented to the emergency department with moderate-severe dehydration. Patients were randomly allocated to blindly receive normal saline (NS), lactated Ringer's or Plasmalyte at 20 ml/kg/h for 2 hours. Outcome measures of the study were pH and changes in electrolytes, including serum potassium, sodium, chloride and bicarbonate levels at 0, 60, and 120 minutes in venous blood gas samples.

Conclusions: NS, lactated Ringer's, and Plasmalyte have no significant effect on acid-base status and all can be used safely to treat dehydrated patients in the emergency department. However, NS can effect acidosis which might be significant in patients who have underlying metabolic disturbances; thus, its use should be weighed before fluid administration in the ED.

The maintenance of intravascular volume is essential in many clinical scenarios, such as severe dehydration and hypovolemic shock, in the emergency department (ED). Crystalloids, including normal saline (NS), lactated Ringer's, and Plasmalyte, are the preferred first-line treatments for such patients [1]. In particular, NS, which is known as physiological serum, is used widely as a well-known, traditional option in situations that require liquid therapy.

NS is significantly hypertonic (osmolality 308 mOsm/L) and contains very high chloride content. NS can cause metabolic acidosis, calling into question its 'normal' and 'physiological' properties [2-4]. High chloride content, the dilution effect due to extravascular bicarbonate, and a strong ion difference (SID) per Stewart's formula have been implicated as causes of acidosis [5].

The frequency and clinical significance of NS-induced acidosis, however, is not well described. Furthermore, in patients presenting to the ED with underlying metabolic disturbances, such as renal failure and chronic obstructive pulmonary disease, choosing the right crystalloid that is associated with the best metabolic profile for the patient becomes more critical [6]. Although crystalloids are used routinely to treat hypovolemia in ED settings, limited data exist on their effects on acid-base status.

In this study, we compared the effect of NS, lactated Ringer's, and Plasmalyte on the acid-base status of dehydrated patients in the emergency department.

We conducted a randomized, double-blind, controlled trial of adults who received intravenous rehydration treatment from April 2009 until July 2010, in an ED that had an annual census of 120,000 patient visits. The institutional review board approved the study, and informed consent was obtained from all participants.

Patient data, including demographics, medical history, and physical examination, were recorded by the treating physician. Venous blood gas samples were collected at 0, 60, and 120 minutes.

We calculated that a minimum of 17 patients in each group would be required to detect a 0.05-unit difference between groups, assuming a standard deviation of 0.05 with 80% power at a 2-sided alpha level of 0.05.

Descriptive statistics were expressed as frequency (percentage) for categorical variables whereas continuous data were expressed as mean ± standard deviation for normally distributed data and median interquartile range (IQR) for non-normally distributed data. Metabolic parameters between groups were compared by analysis of variance. Homogeneity of variances was tested by Levene's test, and Tukey test was used for post hoc analysis between groups. All statistical analyses were performed using SPSS 16 (Chicago, IL) and p<0.05 was considered statistically significant.

We screened 137 patients for eligibility, 41 of whom were excluded for meeting at least one of the predefined exclusion criteria or declining to participate (Figure 1). Ninety-five patients were randomized to the three treatment arms and 5 withdrew their consent during the study. Ultimately, 90 patients were included in the final analysis (n=30 in each group); 50% (n=45) of the patients were females, with a mean age of 48±20 years. Patient demographics were presented in Table 2.

Bicarbonate levels were also in the physiological range (22-26 mM/L) in all groups. Bicarbonate levels decreased in the NS group (average values 23.1, 22.2, and 21.5 mM/L) and increased in the Plasmalyte group (average values 23.4, 23.9, and 24.4 mM/L) at 0, 1, and 2 hours, respectively. There was a significant difference in bicarbonate level between the NS and Plasmalyte groups at the first and second hours of infusion (p=0.002 and p<0.001, respectively). (Figure 3) There were no significant changes in potassium, sodium, or chloride levels during the study (Table 3). We had similar baseline values and responses for hemodynamic parameters responses in all groups. Mean arterial pressure and heart rate parameters were presented in Table 4. 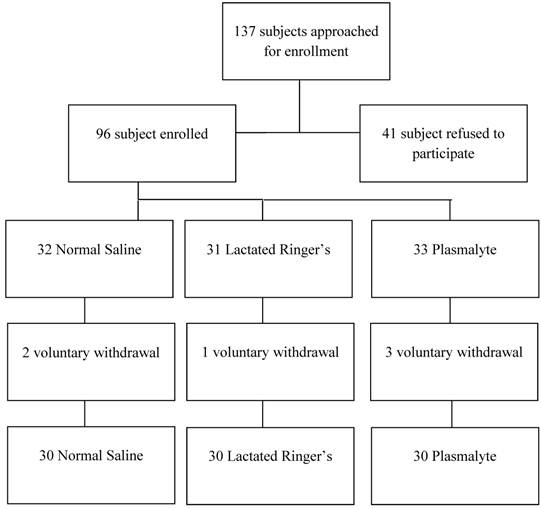 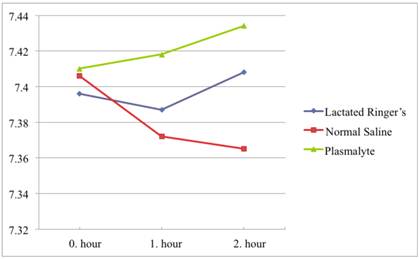 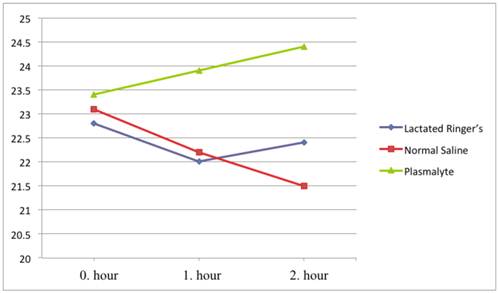 Changes in metabolic parameters between groups.

Changes in hemodynamic parameters between groups.

Our study demonstrates that rapidly infused crystalloid solutions, including NS, lactated Ringer's, and Plasmalyte, have no significant effect on acid-base status. However, there was a significant tendency to lower pH values when using NS, in contrast to Plasmalyte and lactated Ringer's. These findings are consistent with other studies that have shown that large volumes of NS solutions cause acidosis [2-4].

In contrast to other studies, all pH values in our patients were within physiological limits (7.35-7.45), which might be attributed to differences in patient populations and infusion rates. Our patients had no previous metabolic disturbances such as renal failure, and the selected infusion rate (20 ml/kg/h) was lower than in other studies (30-50 ml/kg/h). These findings suggest that underlying metabolic disturbances in patients should be considered before fluid is administered in the ED. In patients with acidosis, lactated Ringer's or Plasmalyte might be a better alternative to NS, and the infusion rate should be lower in these patients.

One limitation of our study was the relatively brief observation period. We limited the observation period to 120 minutes, and no follow-up was performed, which might have prevented us from detecting late effects of crystalloid fluids.

In conclusion, rapidly infused crystalloid solutions, including NS, lactated Ringer's, and Plasmalyte, have no significant effect on acid-base status and can be used safely to treat dehydrated patients in the emergency department. However, NS can effect acidosis, which might be significant in patients who have underlying metabolic disturbances—an issue that should be considered before administering fluids in the ED.