Mirror-Image Arachnoid Cysts in a Pair of Monozygotic Twins: A Case Report and Review of the Literature

Mirror-imaging of arachnoid cysts (ACs) in monozygotic twins (MZ) is extremely rare. We describe a pair of MZ who developed mirror-imaging of ACs in the temporal fossas, and we also review the literature. Brain computer tomography (CT) and Magnetic Resonance Imaging (MRI) of the MZ revealed mirror-imaging of vast lesions of cerebrospinal fluid intensity in their temporal fossas. This is the second ever report of such a case according to the available literature. Unlike the prior case, our patients were 14 months, which is a much younger age than the patients of the previous report. Consequently, our case is better in supporting a genetic origin in the pathogenesis of AC. The findings in our case indicate that early neuroimaging is mandatory in the counterpart of the symptomatic patient with AC, irrespective of the absence of symptoms.

A mirror image is the same features, normal or anomalous, in reverse sides in monozygotic twins (MZ). Mirror-imaging of twins has been reported to present mirror asymmetries in various structures such as handedness, hair whorl direction, dentition, unilateral eye and ear defects, and even tumor locations and bone cysts1,2,3,4,5,6,7. However, only small case series on mirror images involving the brain have been reported8,9,10. To our knowledge, only one case of mirror-imaging of arachnoid cysts (AC) has been reported11, which is different from our case in some respects. We report a case of a pair of MZ with mirror-imaging of AC in the temporal fossas and discuss the possible clinical implications.

Fourteen-month-old MZ were born by cesarean section at 35 weeks' gestation after an uneventful pregnancy of a healthy 24-year-old mother. They have no family history of genetic diseases. Both had Apgar scores of 9/9 at 1 minute and 9/9 at 5 minutes. The placenta was examined and described as monochorionic. Twin A (weight, 1.7 kg; length, 50 cm; and head circumference, 34 cm) was slightly smaller than twin B (weight, 2.3 kg; length, 51 cm; and head circumference, 34 cm). There was nothing particular in the histories of prenatal and perinatal periods. Twin A was admitted following transient (5 minutes) loss of consciousness with no clear trigger, when his body temperature jumped to 39.6°C. Neither foaming at the mouth nor twitching of his arms was found at that time. Neurosurgical evaluation showed no abnormal manifestations. A cerebral computed tomography (CT) scan was performed showing a vast lesion of cerebrospinal fluid (CSF) intensity in the left temporal fossa with a maximum diameter of 63×40×26 mm (Fig 1a). Later magnetic resonance imaging (MRI) confirmed this observation, showing a left middle cranial fossa cystic lesion with low and high signal intensities on T1- and T2-weighted images (Fig. 1b, c). We diagnosed an AC in the other twin (twin B), when the concerned parents took him to our department. Brain CT and MRI of twin B who did not have any complaints revealed a mirror-imaging of the AC in the right temporal fossa with a diameter of 30×21×5 mm (Fig 1d-f). We diagnosed him with AC based on these findings. Since the parents refused all aggressive management approaches, he was managed conservatively and was healthy on a follow-up.

Neuroimaging of the twins. (a) Cerebral CT of twin A shows a vast lesion of cerebrospinal fluid intensity in the left temporal lobe with a maximum diameter of 63×40×26 mm. (b) & (c) MRI of twin A shows a left middle cranial fossa cystic lesion with low and high signal intensities on T1- and T2-weighted images. (d), (e) & (f) Brain CT and T1- and T2-weighted MRI of twin B shows a mirror-imaging lesion with a diameter of 30×21×5 mm with a similar intensity of cerebrospinal fluid in the right temporal lobe. 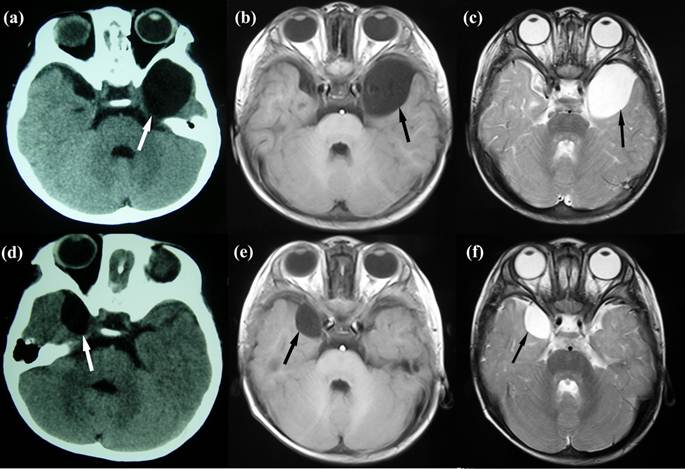 A mirror image is the same features, normal or anomalous, in opposite organs in MZ, which is estimated to occur in 25% of MZ12. It is a characteristic feature of MZ. The mechanism of mirror imaging is poorly understood. One explanation is that later fission of MZ makes them particularly prone to this process13. The cleavage of a single fertilized ovum usually occurs between the 3rd and 8th days of gestation9. If this event is initiated after the 8th day, a mirror image may appear4. Previous reports have presented mirror symmetries in various structures such as handedness, hair whorl direction, tooth patterns, unilateral eye and ear defects, and even tumor locations and un-descended testicles. However, only an extremely small series of cases have been published that concerns the brain. Sommer et al. 8 reported that MZ with discordant handedness showed opposite brain activity patterns in language and a mental rotation task. Sommer et al. 14 have suggested that late splitting of the egg may play a role in twins with opposite handedness and cerebral dominance. Furthermore, a pair of identical twins with mirror-imaging colpocephaly was reported by Nigro et al. 9 Therefore, it is possible that mirror images could occur in the cerebral hemispheres.

AC result from accumulation of CSF surrounded by an arachnoid membrane. Vernooij et al.15 found that AC has a prevalence of approximately 1% in the normal population. There are two hypotheses: primary anomalies and secondary acquired lesions due to trauma, infection, intrauterine catastrophes16 or head surgery17. In our case, the lack of a previous history of trauma, infection and head surgery leads us to believe that the AC was due to a congenital anomaly.

First, Helland and Wester11 reported a pair of 12-year-old MZ with mirror-imaging of AC in the cerebellopontine angle and indicated that genetic factors were important in the predisposition to cystogenesis in some patients. Previously, both the familial occurrence of AC and the presence of AC in patients with genetically determined cystic diseases, such as ADPKD, have indicated a genetic component in the cystogenesis of AC18. The interesting feature in our case is that our patients were 14 months, which is a much younger age than those in the previous report. This finding suggests the genetic change as a major of AC. So far there have been some molecular biology researches that investigated possible genetic concerning the formation of AC. For example, Aarhus et al.19 found nine genes (ASGR1, DPEP2, SOX9, SHROOM3, A2BP1, ATP10D, TRIML1, NMU, BEND5) differed in AC compared to normal arachnoid membrane by microarray analysis, consequently, these nine genes might be associated with the pathogenesis of temporal fossa AC. Helland et al.20 found the Na+-K+-2Cl− cotransporter NKCC1 gene was escalated in AC and NKCC1 was present in the AC wall. These finding indicated NKCC1 gene might play an important role in cystogenesis. The association of AC and other diseases in families suggested that PAPB2, SPG4 and SOX2 gene might be linked to AC21-23. Consequently, further sequencing of those candidate genes is warranted.

Secondly, most AC patients remain asymptomatic through their whole life, and therefore, it is difficult to diagnose such patients. Some patients, who are revealed incidentally, usually have a lack of systematic monitoring and follow-up. Therefore, a large percentage of patients with AC are probably undiscovered. Mirror images, on the other hand, are present in approximately 25% of MZ. Therefore, we suggest that the reported incidence rate of mirror-imaging of AC is probably underestimated. To improve the diagnosis rate, we consider that it is essential to systematically monitor the counterpart of the symptomatic patient, irrespective of the absence of symptoms.

At last, Twin A was admitted to our department with a serious fever, which can also induce loss of consciousness, and therefore, this case may be also detected incidentally. More significantly, the parents selected conservative management. A lengthy follow-up is still warranted, since our patients may still need surgical treatment if the AC affects neighboring structures or leads to increased intracranial pressure as they get older.

In conclusion, we report a second case of mirror-imaging of ACs in MZ, which contributes to the understanding of the genetic contribution to AC. Mirror-imaging of ACs may be more common than previously reported. We also consider that it is mandatory to monitor the counterpart of the symptomatic patient with AC as early as possible, irrespective of the absence of symptoms.

12. Springer S, Searleman A. Laterality in twins: the relationship between handedness and hemispheric asymmetry for speech. Behav Genet. 1978;8:349-57