A male patient, 43 years old, was admitted to First Hospital of Jilin University in October 2009 due to worsening weakness and numbness of all four limbs over the previous 6 years, and urination and bowel problems for one year. The patient had a history of tuberculous meningitis at 22 years of age with no sequelae after treatment. Physical examinations showed diminished superficial sensation in the bilateral upper limbs and trunk above the umbilicus, muscle wasting of the bilateral thenar and upper limbs, grade III muscle power of the upper and lower limbs, reduced tendon reflex, negative Babinski's sign, reduced cremasteric and anal reflexes. Magnetic resonance imaging (MRI) revealed 5 cm of cystic lesion across the posterior part of the foramen magnum. The lesion in T1WI imaging appeared as a low signal, and as a high signal in T2WI imaging. The cerebellar tonsil was compressed upwards, the pons and cervical spinal cord appeared notch-like due to the compression of the cyst. The spinal cord was thickened from the pons to the thoracic spinal cord T10, and a syrinx was seen in the spinal cord with a low T1W1 signal and a high T2WI signal. The size of the supratentorial ventricular system was normal (Figure 1). Based on history and physical and MRI examinations, we diagnosed the lesion as a foramen magnum arachnoid cyst with syringomyelia. 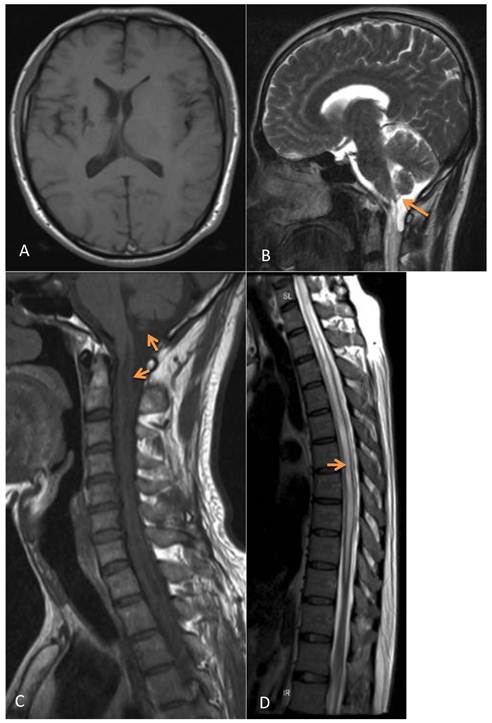 Decompression of the posterior fossa and excision of the arachnoid cyst were then surgically performed. A straight median incision was made on the skull via the posterior temporal route. The occipital squama was cut off and the posterior edge of the foramen magnum and posterior arch of the atlas were then fully decompressed, followed by opening the dura mater. A blister-like cyst was seen to be located in the pons and posterior part of the cervical spinal cord. The cerebellar tonsil was compressed and pushed upwards. After opening the cyst, it was seen that there were multiple compartments of a hard texture within the cyst. The cyst tightly adhered to the cerebrum, pons and cervical spinal cord. The compartments were then separated and the posterior wall of the cyst was excised to break down the cystic structure. The tissue was sent for pathological examination. However, the cyst was not completely excised due to the tight adhesion of the anterior wall of the cyst to the cervical spinal cord. A suture wound closure of the dura mater was performed using artificial mesh repair.

The postoperative symptoms were slightly improved compared to pre-surgery. The results of pathological examination showed that the wall of the cyst was composed of fibrous tissue but without epithelial cells; the diagnosis of arachnoid cyst was made (Figure 2). During three months of follow-up, the condition of this patient continued to improve with normal urination and bowel function and good daily self-management. Physical examinations showed that superficial sensation was gradually diminished and muscle power of upper and lower limbs increased to grade V. Tendon reflex was normal, however, there was no improvement in muscle wasting. MRI re-examination showed that the arachnoid cyst still remained, however, its size appeared slightly smaller than that before surgery. Although the compression on the cerebellar tonsil, pons and cervical spinal cord was reduced, the size of the syrinx was still the same as before surgery (Figure 3).

Results of pathology. H&E staining showing fibrous tissue on the wall of the cyst, and no epithelial cells were observed; arachnoid cyst was diagnosed. Magnification: ×200. 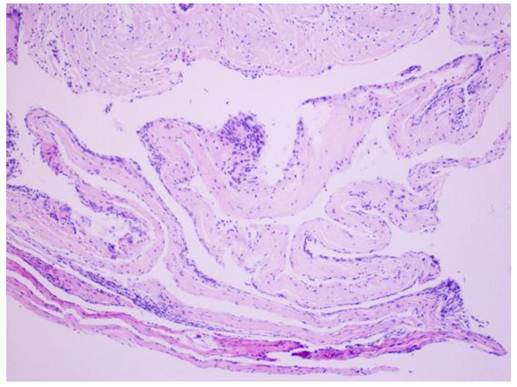 MRI 3 months after surgery shows the remaining arachnoid cyst (which was slightly smaller than before surgery), the compression on the cerebellar tonsil, the reduced pons and cervical spinal cord. However, the syrinx was the same as presurgery. A: T1WI; B: T2WI. 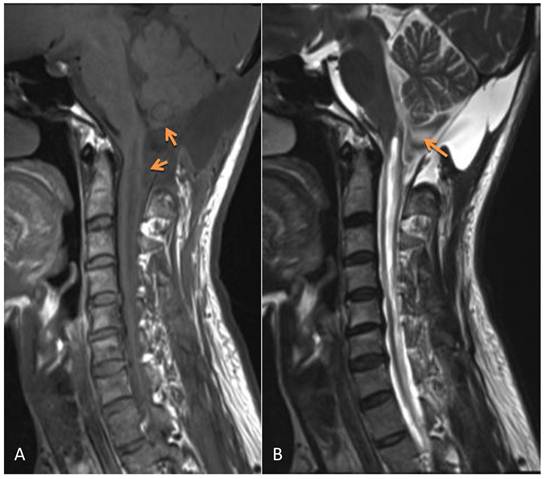 Most posterior fossa arachnoid cysts result in cerebellar tonsillar herniation, consequently leading to compression of the spinal cord and syringomyelia due to the effect of the mass [15-18]. It is extremely rare for the foramen magnum arachnoid cyst to directly compress the spinal cord and develop syringomyelia. In 2000, Jain et al. [19] reported one case of a giant posterior fossa arachnoid cyst extending into the spinal canal to compress the spinal cord and develop syringomyelia; Kiran et al. [20] in 2010 also reported such a case. Although the case we reported here had similar features to these two cases, differences exist. The cyst in our case did not occupy most areas of the posterior fossa as these two cases did, instead it extended across the foramen magnum into the spinal canal at the level of the atlas. Thus, the lesion in our case was extremely rare, and it is also possible one of the reasons that the syrinx did not shrink considerably upon decompression of the foramen magnum as reported previously by most of case studies.

With the report of this case we also did a literature review in order to have a better understanding of arachnoid cysts. Currently, the noncogenital causes of arachnoid cysts are unclear. It has been hypothesized that infection, trauma, circulation of the cerebrospinal fluid (CSF) and/or changes in CSF pressure contribute to the formation of arachnoid cysts. It is generally accepted that arachnoid cyst may be a congenital malformation due to the dynamic CSF pressure changes during development, leading to tearing of the arachnoid mater [21-23]. The patient we reported here had a history of tuberculous meningitis at 22 years of age; he recovered after treatment. Although arachnoid cyst associated with tuberculous meningitis is uncommon, such cases have been reported. Van et al. [24] in 1990 reported one case of acquired spinal cord arachnoid cyst after tuberculous meningitis. Lolge et al. [25] in 2004 also reported two such cases; the cyst in one was located at the anterior part of the foramen magnum. Because it is very difficult to know whether the cyst is congenital or acquired, it is unclear whether tuberculous meningitis was the cause of the foramen magnum arachnoid cyst formation. Nevertheless, whatever the cause the patient had 6 years of clinical presentation and his condition had worsened in the past year. MRI revealed that the arachnoid cyst extended across the forma magnum to compress the spinal cord, and thus surgical treatment was considered. Surgical indications should be considered when an arachnoid cyst becomes progressively enlarged and compresses surrounding blood vessels, leading to corresponding symptoms gradually worsening[26-28]. The features of the present case were considered a suitable standard for surgical indication. Thus, surgical treatment was performed in this case.

There are several types of treatment for arachnoid cyst, including cyst fenestration, cyst-peritoneal shunting and complete or partial excision. The most effective treatment is excision of the whole wall of the cyst to effectively prevent recurrence, particularly posterior fossa tumor [26,29,30]. Posterior fossa arachnoid cyst usually occupies the cerebellopontine angle, a condition from which most experience in its treatment has been obtained. For example, Samii et al.[31] in 1999 reported 12 cases of posterior fossa arachnoid cyst which extended into the cerebellopontine angle. Prognosis in most cases was good after excision of the cysts. However, the location of the cyst in the case we reported here was special and although simple excision can effectively prevent reoccurrence, it was difficult to release the pressure on the spinal cord or relieve syringomyelia due to the pathological changes similar to Chiari malformation type I. Based on the standard treatment of Chiari malformation type I, we thought that sufficient decompression of the posterior fossa and dural suture closure would have a better treatment effect [32-35]. It has been shown that decompression is certainly effective in patients with Chiari malformation type I associated with syringomyelia. Aghakhani et al. [32] reported 157 cases of treatment of Chiari malformation type I. Clinical improvement occurred in 63.06% of these cases, and the percentage of reduction in syrinxes was 90%. Wetjen et al. [33] in 2008 reported 29 cases in which 94% of the patients had improved symptoms. During 3-6 months of follow-up, MRIs revealed a decrease in syrinx size to a varied extent. Heiss et al. [34] in 2010 reported 16 cases of Chiari malformation type I, and syrinxes decreased in 15 patients (94%) after decompression.

The patient we reported here had markedly improved symptoms after decompression treatment. However, MRI demonstrated no reduction in the size of syrinx 3 months after surgery. We consider this to be related to the short follow-up period and incomplete excision of the arachnoid cyst. During surgery the wall of the arachnoid cyst was found to be thick and tough and it adhered tightly to the spinal cord, thus it was not completely excised. Moreover, the thickened arachnoid mater was possibly associated with the patient's tuberculous meningitis 21 years previously. We assume that it was the incomplete excision of the arachnoid cyst that caused a slight reduction in the size of the cyst, and is a possible reason for the insufficient result.