The paranasal sinuses have been thought to contribute to voice resonance, to humidify and warm the inspired air, to increase the olfactory membrane area, to absorb shock to the face and head, to provide thermal insulation for the brain, to contribute to facial growth, to represent vestigial structures, and to lighten the skull and facial bones [8].

The objective of this study was to investigate the prevalence of frontal sinus aplasia and agenesis using dental volumetric tomography in a population of Turkish individuals.

We designed a retrospective study consisting of images of 410 patients (190 male, 220 female; aged 15 to 69 years; mean age, 33 years 7 month ± 13 years 9 month) who presented at our clinic between June 2008 and September 2010. Dental volumetric tomography (NewTom-FP; Quantitative Radiology, Verona, Italy) scanning was performed on patients who were resting in supine positions. Positioning of the patients' heads was performed using two light-beam markers. The vertical positioning light was aligned with the patients' mid-sagittal lines, which helped to keep the head centered with respect to the rotational axis. The lateral positioning light was centered at the level of the sinus, indicating the optimized center of the reconstruction area. In addition, the head position was adjusted in such a way that the hard palate was parallel to the floor, while the sagittal plane was perpendicular to the floor. Dental volumetric tomography DVT scans with 0.5-mm slices in the coronal plane were obtained. Imaging parameters were kV=110, mA=10, and FOV=140 mm. The output was automatically adjusted during a 360º rotation according to tissue density (automatic exposure control system). Two dental radiologists in this study evaluated the DVT images using DVT software (Quantitative Radiology, NNT Software version 2.21, Verona, Italy) with respect to aplasia and agenesis of the frontal sinus on coronal images based on a method proposed by Eggesbø et al. [20]. In this method, frontal sinus aplasia was defined as the absence of frontal bone pneumatization with no ethmoid cells extending above a line tangential to the supraorbital margin. Frontal sinus aplasia was also defined by an oval-shaped sinus with the lateral margin medial to a vertical line drawn through the middle of the orbit (vertical line) with a smooth superior margin and with an absence of the sinus septa (Fig. 1).

Frontal sinus aplasia is defined as the absence of frontal bone pneumatization with no ethmoid cells extending above a line tangential to the supraorbital margin (horizontal line). Frontal sinus aplasia is also defined by an oval-shaped sinus with the lateral margin medial to a vertical line drawn through the middle of the orbit (vertical line) with a smooth superior margin and an absence of the sinus septa [20]. 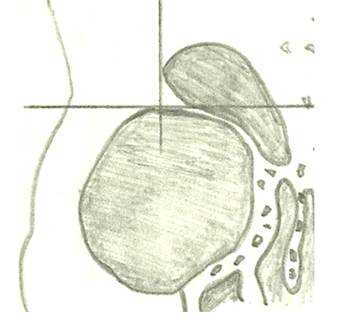 Images were viewed in a darkened room on 2 computers with 17-inch LCD monitors with the same screen resolution. Because the frontal sinuses do not attain adult size until puberty, the minimum age of these cases was 15 years. A weighted kappa test was performed to determine the reliability of this method. Intra- and inter-observer agreement was analyzed using the weighted kappa test.

In the DVT scans, both agenesis (on the right) and aplasia (on the left) were seen in one case (0.24%; Fig. 2). The results from the present study are summarized in Table 1. The weighted kappa values for intra-observer reliability were 0.89 and 0.93 for the first and second observer, respectively. The weighted kappa value for inter-observer reliability between observers 1 and 2 was 0.86. 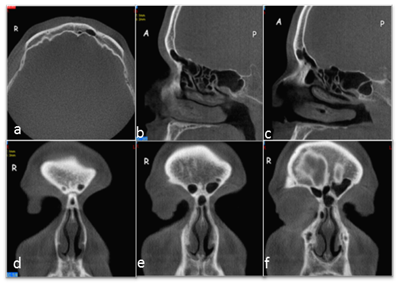 The variations in the anatomy of the frontal sinus may be critical for morphological or forensic investigations and for neurosurgeons performing pterional or supraorbital craniotomy because of the proximity of the sinus to the orbit and the anterior skull base [5]. The frequency of bilateral absence of the frontal sinus has been reported in 3-4% to 10% of several populations [1]. However, this frequency was significantly higher in some populations, including Alaskan Eskimos (25% in males and 36% in female) and Canadian Eskimos (43% in males and 40% in female) [21,22]. According to the literature, the frequency of a bilateral absence of the frontal sinuses (Fig. 3) in this study was lower than that reported for most ethnic populations. In addition, previous researchers have reported that a greater frequency of bilateral frontal sinus agenesis occurs among females than among males, which is similar to the findings in our study (Table 1) [1,5, 21]. 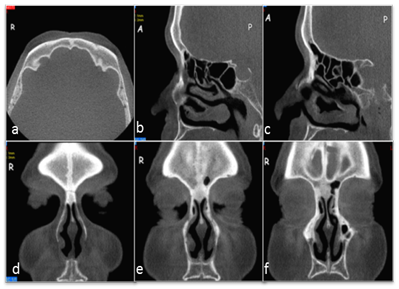 The frequency of bilateral and unilateral agenesis of the sinuses in this study differed from frequencies reported for most ethnic populations. The discrepancy between the frequency in our population and that in other populations may be due to the number of patients examined, the patient sample, and the difference in the examining techniques and equipment. In addition, constitutional (age, gender, hormones, and craniofacial configuration) and environmental (climatic conditions and local inflammations) factors control the frontal sinus configuration within each population and contribute to the abnormal development of the frontal sinus [1,5,18,27]. There is a direct relationship between the mechanical stresses of mastication and frontal sinus enlargement [8, 28,29] and if there is persistence of a metopic suture, the frontal sinuses are small or absent [8-10]. The form of the face and forehead in the presence of a metopic suture conforms to the evolutionary trend of the skull [30]. In addition, Eggesbø et al. [20] suggested that anatomic paranasal sinus variations might be more common in genetically verified cystic fibrosis patients due to less well-developed paranasal sinuses.

5. Ozgursoy OB, Comert A, Yorulmaz I, Tekdemir I, Elhan A, Kucuk B. Hidden unilateral agenesis of the frontal sinus: human cadaver study of a potential surgical pitfall. Am J Otolaryngol. 2010;31(4):231-4

21. Koertvelyessy T. Relationship between the frontal sinus and climatic conditions: a skeletal approach to cold adaptation. Am J Phys Anthropol. 1972;34:161-72