Aims: Strain rate imaging techniques have been proposed for the detection of ischemic or viable myocardium in coronary artery disease, which is still a challenge in clinical cardiology. This retrospective comparative study analyzed regional left ventricular function and scaring with two-dimensional strain (2DS) in the first 4 to 10 days after acute anterior myocardial infarction (AMI).

Methods and results: The study population consisted of 32 AMI patients with an LAD occlusion and successful reperfusion. The assessment of peak systolic 2DS and peak systolic strain rate (SR) was performed segment-oriented with the angle-independent speckle tracking algorithm Velocity Vector Imaging (VVI). The infarcted, adjacent and non-infarcted segments were revealed by late enhancement MRI (LE-MRI), which was used as reference for the comparison with 2DS. The infarcted segments showed a significant decrease of tissue velocities, 2DS and SR in comparison to the non-affected segments.

Conclusion: 2DS and SR as assessed by VVI seem to be a suitable approach for echocardiographic quantification of global and regional myocardial function as well as a promising tool for multimodal risk stratification after anterior AMI.

After acute myocardial infarction (AMI) the discrimination of avital scar tissue and vital reversible harmed myocardium is crucial for the optimal individual therapy, and for risk stratification 1. Further intervention, such as a percutaneous coronary intervention (PCI) or a coronary artery bypass graft (CABG), is only indicated if the myocardium is hypokinetic due to insufficient blood supply (“hibernating” or “stunned” myocardium), but still viable. Until now only late enhancement magnetic resonance imaging (LE-MRI) has provided a certain distinction. However, its application is still limited due to high expense and restricted availability. Therefore, current studies are mostly concerned with the question if newly emerged parametric echocardiographic methods, measuring left ventricular (LV) function and viability by the deformation indices two-dimensional strain (2DS) and strain rate (SR), might be an alternative approach in clinical routine.

Tissue Doppler Imaging (TDI) and 2D Speckle Tracking (2DST) algorithms facilitate the assessment of tissue velocities and deformation markers. But only strain - procentual length alteration relative to a base length - can distinguish between active and passive movement. Strain rate records the change of length per time unit 2-6.

Patients with their first AMI and successful reperfusion of the left anterior descending artery (LAD) by primary PCI were retrospectively enrolled in this study.

Standard echocardiography and cardiac LE-MRI were performed 4 to 10 days after AMI. The segments were categorized by cardiac LE-MRI as follows: infarcted (LE 51-100% of wall thickness and LAD territory), adjacent (either LE 1-50% of wall thickness or no LE but LAD perfusion territory) and non-infarcted (LE 0%, no LAD perfusion territory)9. The results of the VVI offline analysis of the tissue velocities (S´, E´, A´) derived from 2DST and deformation markers (2DS, 2DSR) were compared intra-individually to the MRI findings.

The study protocol was approved by the local ethics committee of the Ruhr-University of Bochum.

The principle of angle-independent VVI (Siemens, Erlangen, Germany) has been developed from M-Mode modifications17. Using 2D gray scale images VVI analysis can be carried out in order to measure tissue velocities (S´, E´, A´), 2DS and SR. We employed the ASE recommendation of a 17 segments model for our research to examine MRI and Echo data 18. The observer defined the endocardial border manually and placed regions of interests (ROI) in the middle of every segment (see Figure 1).

The endocardial border and the myocardium was then automatically tracked frame-by-frame by the VVI software throughout the cardiac cycle. The VVI algorithm includes speckle tracking, global motion coherence, and consistency of periodicity between cardiac cycles, which are described in detail in the producers patent (US 6.909.914) and the patent application publications (US 2005/0070798, US 2005/0074153) 19-20.

In our study we focused on the longitudinal velocities and deformation markers because ischemia especially affects subendocardial fibers first, which are mainly responsible for longitudinal movement 21.

Using a 1.5-Tesla Magnetom Sonata system (Siemens, Erlangen, Germany) we scanned the heart and surrounding structures of 32 patients ECG-triggered in endexspiration and produced the standard views of the long and short axes, as well as the left ventricular outflow tract. With the CMRtools software (Cardiovascular Imaging Solutions, London, UK) we calculated volumes as well as the LV-EF of the left ventricle according to the reference data of Maceira et al. 22.

All continuous values were expressed as mean ± standard deviation after ascertaining a normal distribution. We performed the unpaired or paired t-tests and one-way repeated measures analysis of variance (ANOVA). If the ANOVA test results were significant we followed up with the post hoc Scheffé procedure. ROC analysis was performed as previously described 23. Coefficients of variance were calculated for the inter- and intra-observer variation. Differences were considered significant when the p-value was less than 0.05. We used the statistic software SPSS 15.0 (Chicago, IL, USA) for all analyses.

Between August 2006 and April 2009, 32 patients (27 men) with a mean age of 58±12 years (range 38-81 years), who had their first anterior AMI (23 STEMI; 9 NSTEMI) and underwent successful reperfusion of the LAD by PCI, were enrolled in this study. Successful acute revascularization of the infarcted area was achieved by recanalisation, PCI and Stenting of the culprit lesion in the infarct-related artery (LAD). No patient had to underwent CABG. In the 11 patients with 2 vessel disease a stenosis > 50% was found in the circumflex artery in 4 patients and in the right coronary artery in 7 patients. Complete revascularization in the patients with 2-vessel disease was achieved by serial PCI of the remaining diseased coronary arteries according to hemodynamic relevance and morphology of the stenosis during the further clinical course. Basic clinical data are listed in Table 1.

Echocardiography was performed 7.8±3.6 days after AMI. With a mean of 49±12 %, the LV-EF was mildly impaired after the AMI. M-Mode and B-Mode transthoracic echocardiographic diameters and volumes are displayed in Table 2.

The analysis of tissue velocities demonstrated a gradient of systolic (S´) and diastolic (early E´ and late A´) velocities from the apex to the basis of the heart with significant differences between basal, midventricular and apical myocardium (see Table 3).

Tissue velocities (S´, E´, A´) of basal, mid and apical segments as assessed by VVI

Comparison of VVI and LE-MRI

In a receiver operating characteristic curve (ROC) analysis VVI-derived mean peak systolic velocity S´ of all infarcted segments in comparison to the mean peak S´ velocities of the adjacent and non-infarcted segments predicted infarction (LE ≥ 51%) with 80% sensitivity and 70% specificity (area under the curve, AUC: 0.8, confidence interval 0.77-0.86) for a cut-off value less than 1.95 cm/s (Figure 4, Table 6). 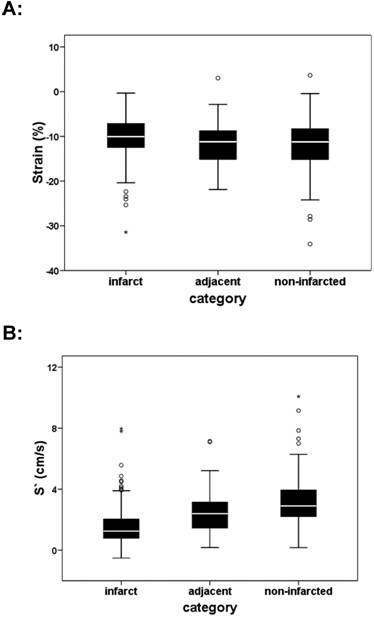 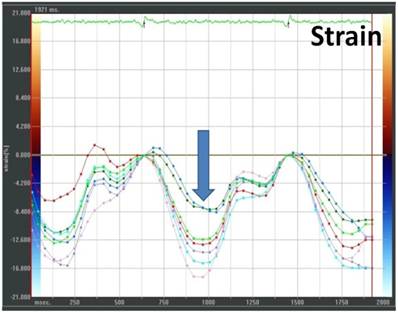 ROC analysis for the detection of previous segmental myocardial infarction by strain, sSR, dSR or S´ after AMI 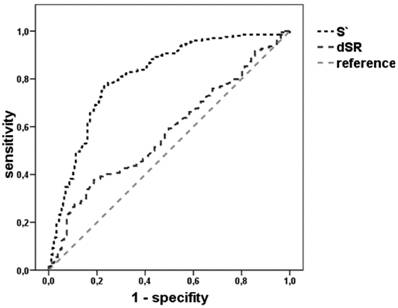 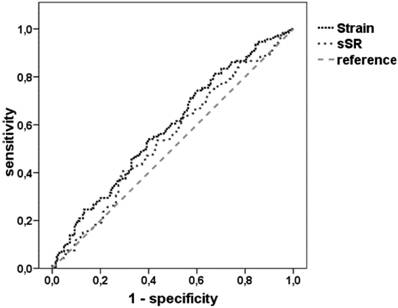 Comparison of deformation and tissue velocities in AMI according to the categorization of the segments as infarcted, adjacent and non-infarcted (see methods).

Comparison of deformation imaging and infarct transmurality by LE-MRI

The main finding of this study is the significant difference of strain, SRe and tissue velocities between infarcted and non-infarcted segments demonstrated by an comparison between 2D Speckle Tracking (2DST) and late enhancement MRI (LE-MRI).

Poor agreement between VVI and TDI measurements have been previously demonstrated, and therefore they are not interchangeable 23,37. The measured tissue velocities in the present study are lower than in previous VVI studies 14,15, which might be explained by the extent of infarct size or relatively lower PFR´s in our study. At the moment there are no normal values of a large cohort of healthy controls and validated recommendations for the PFR in VVI analysis are still not available. The data of former studies showed that a mean PFR about 40-50 Hz is suitable for VVI analysis. A far higher PFR might not assure the proper capturing of the speckle pattern, and a lower frame rate might cause even decreased values. No relevant affection of the measurements due to the PFR should be expected because our analysis and interpretation of the results based on an intra-individual comparison of the segments.

As velocity measurements alone are not able to differentiate between active and passive movement, deformation imaging is crucial to identify ischemic tissue 7, 24-29. In principle, our findings are confirming previously published studies about infarct detection and size, who described significant differences of the radial and circumferential strain and strain rate by 2DST in normo-, hypo-, akinetic and dyskinetic segments of post-infarct patients 8-13, 30-37, which were not reliably accessible by TDI. Radial strain also allowed the differentiation between transmural and non-transmural infarction31, a layer specification10, and the identification of segments, which will recover after a revascularization therapy 32.

The intra- and inter-observer variation of our data is congruent with the data of Jarnert et al. and Zeng et al.38-39. In general, the variability, which has been assessed in this study, do not differ from previously published data of parametric echocardiography, already clinically integrated and established 15.

Based on 2D gray scale images the quality of VVI data is strictly dependent on the quality of the echocardiographic loops. A problem of all Strain Rate Imaging algorithms is the huge variability of comparable parameters and values, which are provided by different ultrasound machines and software algorithms. There are neither guidelines, standardized technical settings, nor normal values for each of the different software packages, which complicates the comparison of the different approaches 30. Although we analyzed the segments following a strict protocol we had to exclude segments in which the tracking failed (feasibility 71%).

One could also criticize the intra-individual comparison instead of considering a control group. In our opinion, as the infarct is a regional process, there is no better match than the non-infarcted segment of the same patient for an infarcted segment. Otherwise there will always be confounders like age, blood pressure, and heart rate.

Velocity Vector imaging (VVI) is a clinically feasible approach for strain measurements in infarcted myocardium allowing an accurate assessment of global and regional myocardial function, and a differentiation between infarcted and non-infarcted segments. Further research for the definition of cut-off values and technical standards will be needed to fully integrate this method into clinical practice. The detection of scarred as well as vital, but dysfunctional myocardium by VVI might be useful for multimodal risk stratification and the determination of different therapeutic approaches as well as prognosis in future.