Prevalence of Overactive Bladder, its Under-Diagnosis, and Risk Factors in a Male Urologic Veterans Population

Purpose: We assess the prevalence of overactive bladder (OAB) and its risk factors in a male urologic veterans population. Materials and Methods: Validated self-administered questionnaire was prospectively given. Results: Among 1086 patients, OAB was present in 75%, of which 48% had not been diagnosed/treated. The risk of OAB increased with age. OAB was not associated with BMI, smoking, race, diabetes, CHF, and COPD. Conclusions: The prevalence of OAB in this population is under-diagnosed and under-treated.

Recent international population and non-population studies reported overactive bladder (OAB) in 10-17% of the adult population, depending on sex.1,2,3,4 In the U.S., a population-based study reported that 16.0% of men and 16.9% of women experienced OAB.5 No study has examined the prevalence of OAB in the urologic population, which is expected to be much higher. Some studies have reported association of OAB with age (men and women), body mass index - BMI (female), menopause (female), constipation (female), episiotomy (female), and beer consumption (men). 2, 6,7,8

In this prospective cohort study, we assess the prevalence of OAB in urologic male veterans population, the need for OAB screening, and risk factors for OAB.

OAB-V8 total score that was equal to or greater than 6 for men was defined as OAB positive. Subsequent questionnaires from the same patient were excluded.

To determine the relationship between OAB and other factors (age, BMI, smoking, race, diabetes, hypertension, congestive heart failure, chronic obstructive pulmonary disease, diuretic medications and hepatitis), covariates were first individually evaluated using the chi-square test. Statistically significant (p < .05) covariates were retained for odds ratio analysis. Patients were excluded from a specific analysis if they did not report on the variable to be analyzed. Results are presented as odds ratio and 95% confidence interval (95% CI) 10. Statistical analyses were performed using Stata 8.2 (StataCorp, College Station, TX).

OAB was present in 75%. Among those surveyed with OAB, 48% had not been diagnosed with or treated for OAB, LUTS or benign prostatic hypertrophy (BPH). Those with OAB had a worse quality of life score. Mean quality of life score for those with OAB was 3.4 of 6, and those without OAB 1.6. Furthermore, 59% reported urge incontinence, 76% urgency, 90% frequency and 85% nocturia. 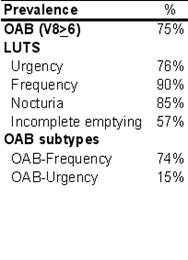 The prevalence of OAB in men has been reported to be 10.2-16.0%. It is expected to be much higher in the urologic setting since urinary complaint is a common reason for urologic visit. Our study found that 75% of those surveyed, experienced OAB. This is almost five fold higher than that reported for the general population. Since OAB is a compilation of lower urinary tract symptoms, the prevalence of LUTS should be higher. Irwin et al.2 in their 5-country population study reported the prevalence of any LUTS to be 62.5% whereas the prevalence of OAB to be 10.8%. Our study found that 95% reported urinary frequency and 85% nocturia. The increase in our study is consistent with Irwin et al.'s epidemiologic study.

Although a higher prevalence of OAB is expected in our study population, the increase may also be compounded by variation in OAB definition. Most reported population studies had used the 2002 International Continence Society definition of OAB. Our study is based on a validated OAB screener questionnaire (OAB-V8). As with any screening tool, the sensitivity should be high but specificity may not be high. The OAB-V8 questionnaire has only been validated in a primary care setting. Validation in a high risk population is still pending.

Our study also examined the risk factors for OAB in men. We found that OAB increased with age: 49% in men aged 40-49 years to 79% in men aged 70-79 years (p<0.001, OR=3.9). This is consistent with previous epidemiologic studies. Our study also found an association between OAB and hepatitis (OR=2.2, p=0.03). It is uncertain how hepatitis relates to OAB. As such additional epidemiologic studies are needed in this regard. Unlike previous studies by Teleman et al.8, we found no association between OAB and BMI. However, patients in that study were all female. We also found no association with smoking, race, diabetes, hypertension, congestive heart failure, chronic obstructive pulmonary disease, and diuretic medications. 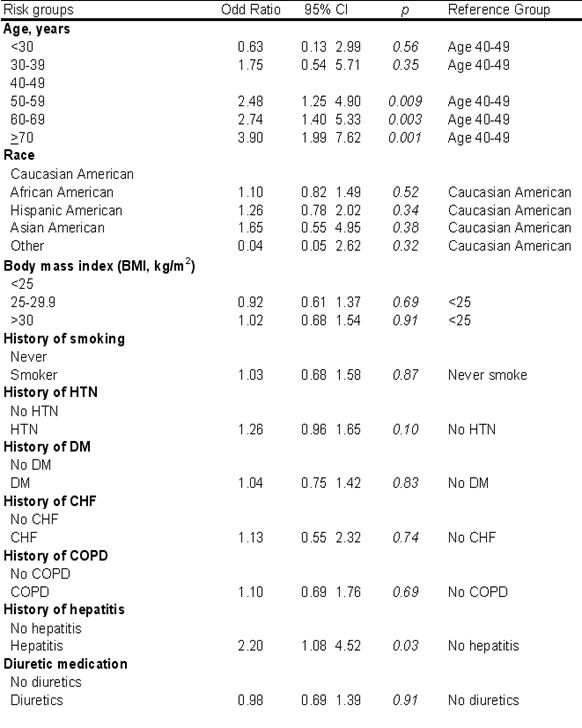 The prevalence of OAB in the male urologic veterans is almost five fold higher than that reported for the general population. OAB is under-diagnosed and under-treated. This patient population may benefit from routine screening. Furthermore, our study shows that OAB is associated with age and a history of hepatitis.

4. Milsom I, Abrams P, Cardozo L, Roberts RG, Throff J, Wein A. How widespread are the symptoms of an overactive bladder and how are they managed? A population-based prevalence study. BJU Int. 2001;87:760