Introduction. Hyperdontia is an odontostomatologic anomaly characterized by an excess in tooth number. It seems to occur more often in patients with hereditary factors concerning this anomaly: this case represents a rare form of hyperdontia, with bilateral multiple supernumerary teeth, with evident penetrance of the phenotype in the family unit engaged in the present study. The karyotype determination excludes a pathogenesis on chromosomal basis.

Case report. A 30 years old patient came to our observation with five impacted teeth (1.8, 2.8, 3.8, 4.7 and 4.8), as well as with the presence of an impacted supernumerary tooth (distomolar 4.9). The patient was suggested to allow us to perform a radiologic screening to his two sisters aged 17 and 13 years.

Conclusions. The value of the present case report can be used as a paradigm for the assessment of the hereditary factors predisposing the onset of hyperdontia, and for the consequent management by oral surgeon of family units in which the odontostomatologic anomaly was detected without any syndromic forms.

Hyperdontia is an odontostomatologic anomaly characterized by an excess in tooth number, both erupted and non-erupted. It can be described as “real” if determined by an increased number of teeth, otherwise it is “false” if caused by a delay in shedding of deciduous teeth beyond the transition period 1, 2, 3, 5.

In one of his studies, Tomes suggested a nomenclature for teeth in excess3: they were defined as “supplementary” if they present a normal morphology and as “supernumerary” if they present morphologic and volumetric anomalies. Supernumeraries are classified according to morphology 3 into conical, tuberculate, supplemental and odontome; however, the Literature also reports a classification according to intraoral position of the supernumerary teeth: Mesiodens; Paramolar; Distomolar and Parapremolar 4.

Hyperdontia is reported quite frequently (males:females around 2:1) 2, and it seems to occur more often in patients with hereditary factors concerning this anomaly 4. A study, conducted on 30 patients with 41 “mesiodens”, anamnestically determined a familial predisposition in 31% of cases6. Supernumerary teeth are frequently found in the superior maxillary bone and mainly in the premaxilla (90-98%) 7, they are often impacted (88,7%) and are often present in the palatine area8,9.

The prevalence of multiple supernumerary teeth ranges from 8 to 27% of cases 7,10.

Hyperdontia is often occasional, but hereditary factors can also be involved, especially in the most serious cases, otherwise it can be associated to genetic syndromes such as “Gardner Syndrome” or “Cleidocranial Dysplasia”; in these syndromic forms, hyperdontia is a sign of a clinical picture which is definitely more complex, and further anomalies are always present.

It follows that the ability to prematurely intercept a clinical picture of hyperdontia is important also for the possible association of this anomaly with ingravescent syndromic forms 10,11; in order to make an early diagnosis of any syndromic forms we can use the G-banding technique 12: G-banding is obtained with Giemsa stain following digestion of chromosomes with trypsin. It yields a series of lightly and darkly stained bands - the dark regions tend to be heterochromatic, late-replicating and AT rich. The light regions tend to be euchromatic, early-replicating and GC rich.

The most frequent complication of having supernumerary teeth is the dental malposition 1, 2, 3 of teeth of the normal series (erupted or not) which in turn leads to clinical consequences of orthodontic and/or surgical nature; more rarely, impacted supernumerary teeth are the cause of follicular cysts, neuralgic manifestations, dysodontiasis of permanent teeth.1, 2, 3

The clinical situations that may indicate the presence of supernumerary teeth are:

Hyperdontia therapy depends on the area and on the number of teeth in excess (erupted into proper maxillary arch position, out of arch or impacted), and also depends on the presence of pathologic processes affecting the supernumerary teeth and/or the teeth of the normal series which erupted, retained or impacted 1, 2.

In cases where surgical therapy is recommended, an operation to prefer is germectomy of the supernumerary tooth to be formed, in order to prevent the onset of a malocclusion due to altered development of the normal series; in case of completely formed supernumerary teeth, a preoperatory evaluation is necessary: any contiguity between the tooth and the important anatomic structures will be investigated, and the operation will be planned with as little trauma as possible, in order to preserve the hard and soft surrounding structures.

A 30 years old Caucasian patient came to our observation with five impacted teeth (1.8, 2.8, 3.8, 4.7 and 4.8, according with FDI World Dental Federation notation), as well as with the presence of an impacted supernumerary tooth (distomolar 4.9). The patient reported localized pain and a slight homolateral submandibular lymphadenopathy, without functional limitations or fever. No occlusal hindrance was caused by these supernumerary teeth. Although anamnesis allowed to exclude stomatological pathologies, congenital anomalies and genetic or syndromic alterations, the patient reported a hereditary etiology: her mother's supernumerary teeth in the posterior portion of the superior maxillary bone were avulsed.

The patient was suggested to allow us to perform a radiologic screening to his two sisters aged 17 and 13 years, after giving their informed consent.

The X-ray photography showed that the patient's sisters had a clinical picture of hyperdontia, together with dental impaction, in a systemic and non-syndromic form and with a normal psychophysical development. However, the karyotype determination was done by G banding technique (GTG) (Seabright, 1971). The proband, the mother and the elder sister had a normal male (46,XY) and normal female (46,XX) karyotype, respectively (Figures 1, 2, 3).

The radiologic evaluation of the two sisters allowed to determine as follows:

In agreement with the international literature, the Authors opted to leave the sisters' supernumerary teeth in situ, as there were not any signs or symptoms justifying the extraction therapy. Whereas the patient who first came to our attention was subjected to extraction of teeth 4.7, 4.8 and 4.9, after a routine hematological investigation and after the assessment of radiographic exams, such as X-Ray Dental Panoramic Tomogram and Denta-Scan (Fig. 6) of the inferior maxillary bone. Exodontia led to remission of the algic symptomathology, without compromising somesthesia in the treated region, although the extracted teeth were in the close proximity of the inferior mandibular canal. 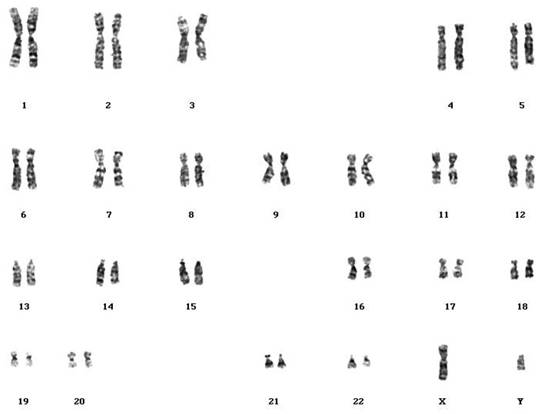 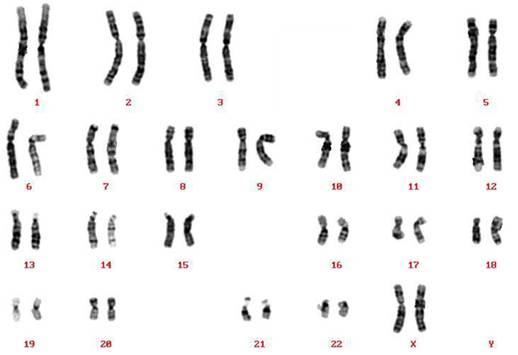 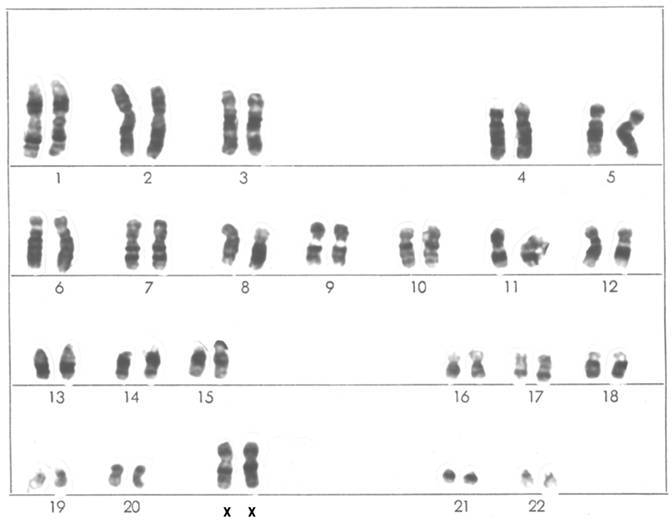 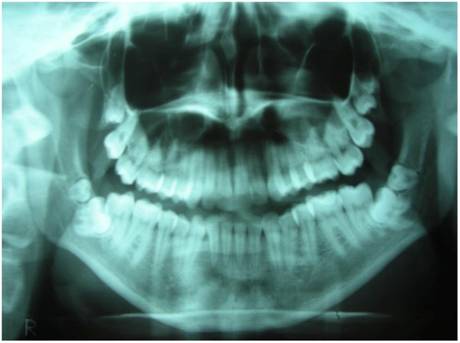 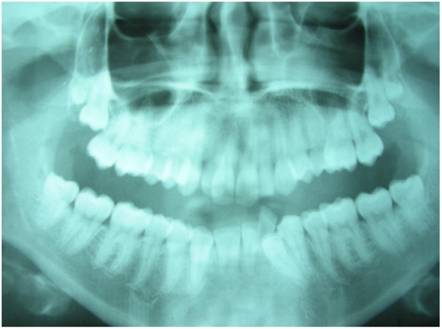 Dental-Scan of the mandibular bone (proband) 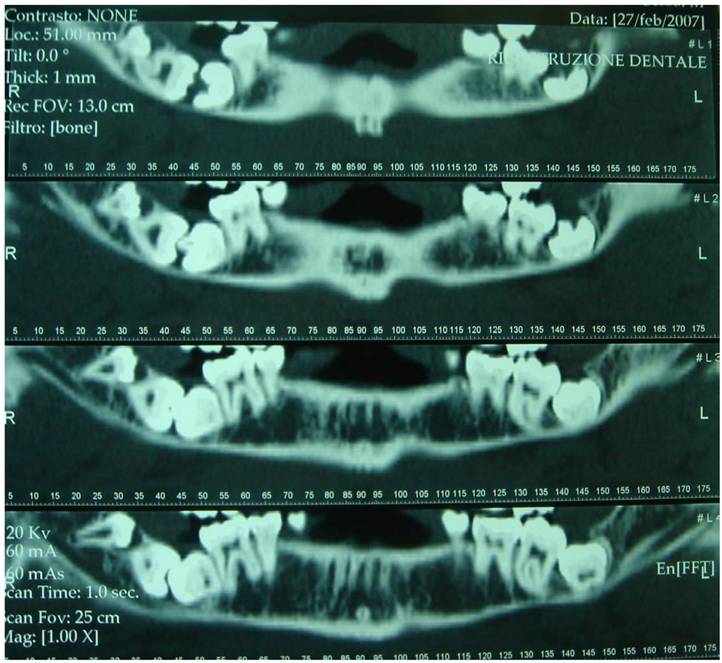 The etiology of the Hyperdontia is still not totally understood.23

In fact, numerous exogenous factors can interfere with odontogenesis. Some authors have reported that tooth anomalies can result from a complex interplay of genetic factors and developmental processes.24 One interesting theory, supported in the literature, suggests that the local and independent hyperactivity of dental lamina results in an excessive proliferation of cells, which results in the formation of extra tooth buds.25

The relationship between supernumerary teeth and hereditary predisposition has also been investigated and suggested: most of the reported cases of hyperdontia are determined by multifactorial inheritance. Batra, et al described a case of nonsyndromic multiple supernumerary teeth, which suggests that there was an autosomal dominant pattern of inheritance. 25

After a careful examination of the international literature and in the light of the described case, the hereditary etiology of non-syndromic hyperdontia can be clinically confirmed. The present case represents those rare forms of hyperdontia with bilateral non-syndromic multiple supernumerary teeth, and with evident penetrance of the phenotype in the family unit engaged in the present study. The karyotype determination is useful for excluding a chromosomal pathogenesis on chromosomal basis.

The value of the present case-report can be used as a paradigm for the assessment of the hereditary factors predisposing the onset of hyperdontia, and for the consequent management of family units in which the odontostomatologic anomaly was detected without any syndromic forms.

The presence of a clinical picture of hyperdontia in the mother and her 3 children of the analyzed family unit, even if in varying degrees, makes the Authors believe in an autosomic dominant transmission of the character, in consideration of the vertical and gender-independent transmission.

The present case also confirms that, in case of a set of symptoms coexisting with the clinical manifestation, the surgical therapy is recommended and decisive.

18. Becker A, Bimstein E, Shteyer A. Interdisciplinary treatment of multiple unerupted supernumerary teeth. Report of a case. Am J Orthod. 1982May;81(5):417-22