Introduction. Anisocoria indicates a difference in pupil diameter. Etiologies of this clinical manifestation usually include systemic causes as neurological or vascular disorders, and local causes as congenital iris disorders and pharmacological effects.

Case Report. We present a case of a 47-year-old man, suffering from spastic tetraparesis. After the oral surgery under general anesthesia, the patient developed severe anisocoria: in particular, a ~4mm diameter increase of the left pupil compared to the right pupil.

We performed Computed Tomography (CT) in the emergency setting, Nuclear magnetic resonance (NMR) of the brain and Magnetic Resonance Angiography of intracranial vessels. These instrumental examinations did not show vascular or neurological diseases. The pupils returned to their physiological condition (isocoria) after about 180 minutes.

Discussion and Conclusions. Literature shows that the cases of anisocoria reported during or after oral surgery are rare occurrences, especially in cases of simple tooth extraction. Anisocoria can manifest in more or less evident forms: therefore, it is clear that knowing this clinical condition is of crucial importance for a correct and timely resolution.

Etiologies of this clinical manifestation usually include local and systemic causes.

Systemic causes are neurological or vascular disorders, usually associated with raised intracranial pressure or a consequence of traumatic or hypoxemic lesions of the Parasympathetic and Orthosympathetic Nervous System. 2

A rather rare occurrence is intravascular embolization of local anesthetics containing vasoconstrictors.

In the clinical practice, an intraoperative or postoperative anisocoria is assessed according to its cause. Knowing this clinical event and the rapid identification of the trigger factor is the basis of a correct and timely therapeutic approach, which, in severe cases, could save the patient's life.

We present a case of a 47-year-old man, suffering from spastic tetraparesis.

The intraoral examination revealed destructive decay of tooth number 12 and necrotic residues of teeth 15 and 27 (Fig. 1).

Being a disabled and non-collaborating patient, the Authors prepared oral surgery under general anesthesia.

In the 24 hours before surgery, the patient was monitored with hematological examinations (Complete blood count, hemocoagulative pattern, phlogosis indexes and serum protein electrophoresis), Electrocardiogram, Orthopantomography of dental arches, chest radiography (with the patient seated) and intraoral and extraoral examination.

In this case, preoperative examinations did not reveal noteworthy clinical conditions. In the light of the subsequent occurrence, we report an equal size of the patient's pupils (isocoria) on the day before surgery, and the pathological case history did not reveal previous vascular disorders or traumas of the intracranial district.

On the day of surgery, anesthetists prepared the patient with Midazolam 5mg and Atropine 0.5mg. After the preoperative phase, General Anesthesia was performed as follows: Propofol 150mg together with Fentanyl-γ, muscle relaxants Midarine 75mg and Cisatracurium 10mg, and Sevoflurane 0.5%; in the postoperative course, anesthetists administered Ephedrine 5mg and Ketorolac 3mg.

The patient's vital parameters were constantly monitored and were normal.

The dental treatment was simple avulsion of the above-mentioned teeth: after plexus anesthesia (2 phials of hydrochloride mepivacaine 3%) without vasoconstrictor, we avulsed tooth 12 and the necrotic residues of teeth 15 and 27, and scraped the post-avulsion alveolus with Volkmann spoon. Then the post-extraction alveoli were closed with a resorbable suture. After the surgical procedures, there were no signs of iatrogenic lesions and we observed a correct hemostasis of the surgical site.

Recovery from drug-induced unconsciousness was induced after administering Intrastigmine (2 phials) and Atropine 0.5mg as decurarizing agents.

On awakening, the patient was conscious, without motor impairment to upper and lower limbs. However, he developed severe anisocoria; in particular, a ~4mm diameter increase of the left pupil compared to the right pupil, although he had no visual impairment and a normal reaction to light stimulus. (Fig. 2)

The diagnostic hypothesis concerned the ophthalmic ganglion, even though vascular aneurysmal diseases could not be excluded.

The embolization of anesthetic in peripheral blood vessels, as well as lesions to pyramidal and extrapyramidal nerve tracts, were immediately analyzed and considered incompatible with the treatment performed.

In order to achieve diagnostic certainty, we performed Computed Tomography (CT) in the emergency setting, Nuclear magnetic resonance (NMR) of the brain and Magnetic Resonance Angiography of intracranial vessels. (Figs. 3,4,5)

Computed Tomography revealed the presence of mild dilatation of the ventricular system, and we noted parenchymal, likely vascular involvement in the right capsulolenticular area and bilateral dilatation of the cerebral cortical sulci.

The report of NMR described an on-axis ventricular system with an atrophic dilatation and a localized atrophy in the bilateral mesial frontal area, due to perinatal pathologies.

The Magnetic Resonance Angiography did not reveal malformations or intracranial vascular anomalies.

After these instrumental examinations, we took digital pictures of the patient's pupils every 60 minutes, in order to monitor the clinical situation. The pupils returned to their physiological condition (isocoria) after about 180 minutes. (Fig. 6)

The patient never had the clinical manifestation of the pupil abnormality again, and reported no pathological outcome after the described occurrence. 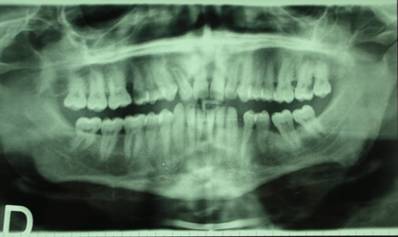 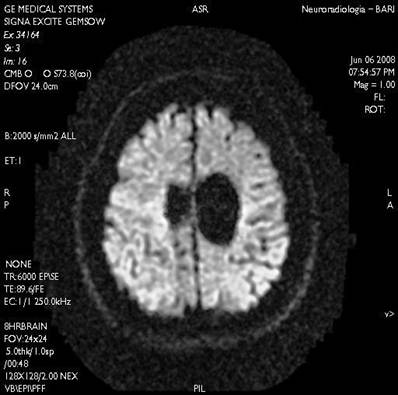 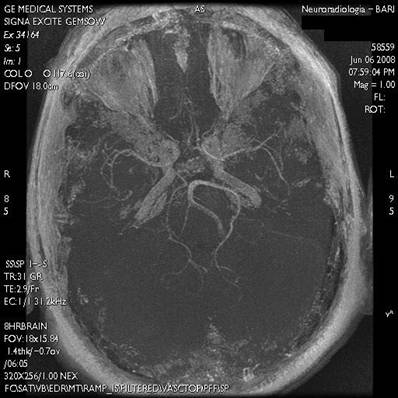 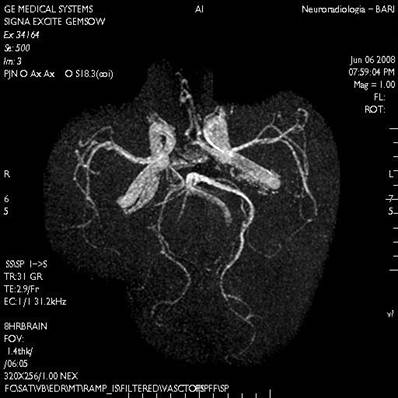 The pupils returned to their physiological condition (isocoria)

Anisocoria is a clinical condition that rarely occurs after surgery under general anesthesia.

Unilateral mydriasis can be caused by a contusion injury to the iris sphincter or by a direct trauma to the oculomotor nerve. 4

The traumatic injury can also be a lesion of the III cranial nerve. 2

Traumatic or hypoxemic injuries of the sympathetic nervous system may be the cause of Horner's Syndrome, which refers to a group of signs produced when sympathetic innervation to the eye is interrupted.

The experience of ophthalmic medicine in using eye drops for glaucoma treatment proved that the cholinergic action of certain active principles could alter the pupil diameter. In case of accidental contact with the eye, these principles can lead the clinician to make a wrong diagnosis of anisocoria of neurogenous or vascular origin.

Some of the active principles of the most common eye drops used for glaucoma therapy are:

Some cases reported in literature confirm unilateral mydriasis after the spread of phenylephrine nose drops through the nasolacrimal duct. These drops were used for mucosal vasoconstriction. 8

Literature shows that the cases of anisocoria reported during or after oral surgery are rare occurrences, especially in cases of simple tooth extraction. It also indicates the absence of a case history allowing the oral surgeon to make a differential diagnosis, in case he has to diagnose this clinical condition.

Among the few cases of anisocoria after oral surgery under general anesthesia, we report a unilateral mydriasis together with eye movement disorders in a patient treated with regional anesthesia with lidocaine and epinephrine for surgical removal of impacted third molars. 10

For investigation and diagnosis of unilateral pupil dilation, the main causes that a clinician should think of are a cerebrovascular accident, a neoplastic mass, a cerebral lesion or an ocular trauma. However, the present study also indicates the existence of minor factors, often ignored or unclear, that should be taken into consideration for differential diagnosis.

Anisocoria can manifest in more or less evident forms: therefore, it is clear that knowing this clinical condition is of crucial importance for a correct and timely resolution.

Once severe anisocoria (L>R) was confirmed in the described case report, the Authors supposed that mepivacaine hydrochloride could have crossed the homolateral pterygopalatine fossa and the inferior orbital fissure in the left hemimaxilla, and then reached the eye socket and acted on the ciliary ganglion.

Unlike literature reports, this is a case of unilateral mydriasis after administration of local anesthetics with plexus infiltration.

However, the patient had no blurred vision or eye movement disorders, as described and validated by the Authors: it is unlikely, then, that the involvement of the ciliary ganglion is responsible for anisocoria. Besides, even an accidental contact of the left eye with mepivacaine is unlikely to be the cause of this condition, as conjunctival administration of mepivacaine does not cause pupil dilation. Despite hemodynamic stability in our patient, we examined anyway the possibility of an intracranial vascular event as the cause of unilateral mydriasis in the postoperative period. CT and NMR reassured us about the patient's neurological status.

Consequently, the patient's pupil dilation could have been caused by accidental exposure to atropine, which entered the conjunctival sac and caused anisocoria.

The photographic monitoring of anisocoria in the post-operative period, and the relative brevity of unilateral mydriasis, empirically confirmed the diagnosis and the benign prognosis.

As reported, the Authors point out that an accidental iatrogenic exposure to mydriatic agents should be considered as a possible cause of intraoperative unilateral mydriasis, in addition to the major causes that should be immediately investigated and then managed in the most effective way.

5. Jacobson DM. A prospective evaluation of cholinergic supersensitivity of the iris sphincter in patients with oculomotor nerve palsies. Am J Ophthalmol. 1994;118:377-83