Although tyrosine kinase inhibitors is effective for dramatically reducing CML cells, it might be difficult to eradicate completely the CML stem cells. We aimed to clarify the safety and effects of WT1 peptide vaccination in combination with imatinib therapy for a CML patient. A 51 year-old male with CML in CP, who showed a resistance against imatinib therapy for 2.5 years, began to be treated with 9mer modified-type WT1 peptides in combination with standard dose of imatinib. Although every 2-week-administration of WT1 peptides for 22 weeks did not show definite effects on the quantification of bcr-abl transcripts, by changing the administration from every 2 weeks to 4 weeks bcr-abl transcripts decreased remarkably. After 11 months of every 4-week-administration of the peptides and 12 months post cessation of the peptides bcr-abl transcripts achieved to the level below detection by RQ/RT-PCR (complete molecular response). WT1/MHC tetramer+CD8+ CTLs, which appeared after the second administration of WT1 peptides and remained more than 15 in number among 106 CD8+ T cells throughout the administration of WT1 peptides, are still present in the blood on 14th month post cessation of the peptides. An in vitro study as to the cytotoxicity of lymphocytes induced by mixed lymphocyte peptide culture demonstrated that cultured lymphocytes possessed cytotoxicity against WT1 expressing leukemia cells and the cytotoxicity was WT1-specific and MHC class I restricted. The present study showed that WT1 peptide vaccination in combination with TKI is feasible and effective in the therapy for imatinib-resistant CML.

While tyrosine kinase inhibitors (TKIs) such as imatinib are currently regarded as the first line therapy for chronic myelogenous leukemia (CML), it seems that CML stem cells display intrinsic resistance against most TKIs [1]. Therefore, extermination of CML stem cells could be critically needed for CML patients to be fully liberated from the TKI therapy. On the other hand, anti-tumor cytotoxic T lymphocytes (CTLs) are presumed to kill the relevant antigen-expressing tumor cells including resting cells such as tumor stem cells and spare normal hematopoietic progenitor cells [2].

In order to eradicate minimum residual CML cells which survived long-term imatinib therapy, we started WT1 peptide vaccination therapy in combination with imatinib in a CML patient who could not acquire a major molecular response through the administration with a single agent of imatinib. In addition, we tried to monitor the kinetics of WT1-specific CTLs as well as low frequency immunocompetent cells such as plasmacytoid DCs (pDCs), myeloid dendritic cell-1s (mDC1s), γδT cells and regulatory T (Treg) cells in peripheral blood (PB) during WT1 peptide vaccination.

Modified-type WT1 peptide (HLA-A*2402-restricted, 9-mer peptide; CYTWNQMNL) was synthesized in GMP grade by NeoMPS (San Diego, CA, USA). WT1 peptide was dissolved with DMSO (Sigma-Aldrich, St. Louis, MO, USA) and then diluted with 5% glucose. A water-in-oil emulsion was prepared by mixing WT1 peptide as the aqueous phase and the adjuvant Montanide ISA-51 VG (Seppic, Paris, France) as the oil phase. The emulsion (WT1 peptide concentration: 3.33 mg/ml) was administered subcutaneously at the dose of 1 mg/body at 2 different sites such as the upper arm and thigh. The administration of WT1 peptides was performed after informed consent was obtained according to the protocol approved by the IRB of Niigata University School of Medicine.

MLPC was initiated by culturing 1-3 x105 PB-MNCs in 100 μl of 5% autologous serum-containing RPMI1640 with 10 μg modified-type WT1 peptides in 96 well plates in a modification of the method described by Karanikas et al [8]. Three days later RPMI1640 with 50 IU/ml IL-2 (Shionogi, Osaka, Japan) was added and a half of culture medium was changed every 3 days thereafter. After culturing for two weeks, cultured cells in each well were individually analyzed for various surface phenotypes, WT1 peptide/HLA-A*2402 tetramer and WT1-specific cytotoxicity by using flow cytometry. 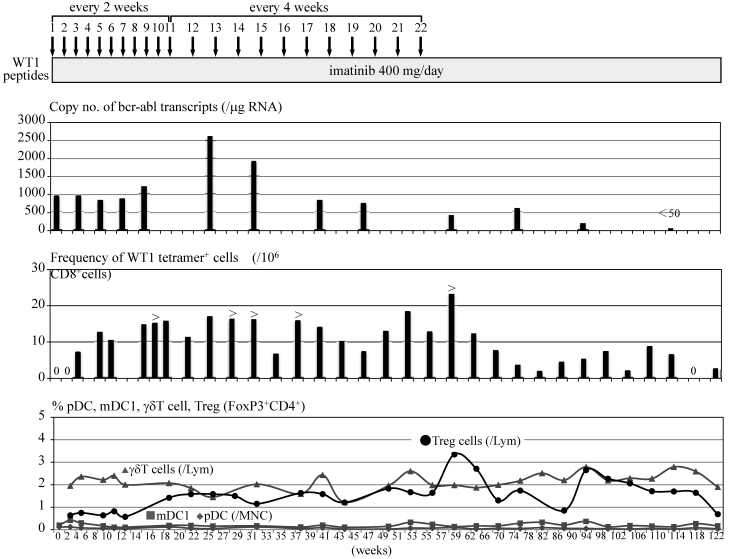 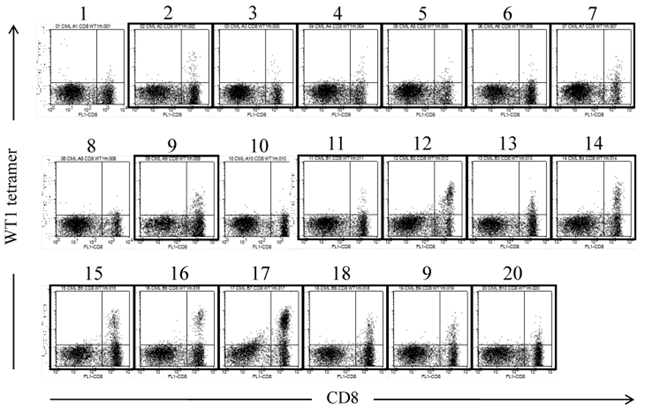 Cytotoxicity assay of cells cultured in each well of MLPC for 2 weeks. Autologous B-LCL pulsed with or without modified or wild-type WT1 peptides were used as target cells in a CFSE-labeled target cytotoxicity assay of effector : target ratio of 5:1. 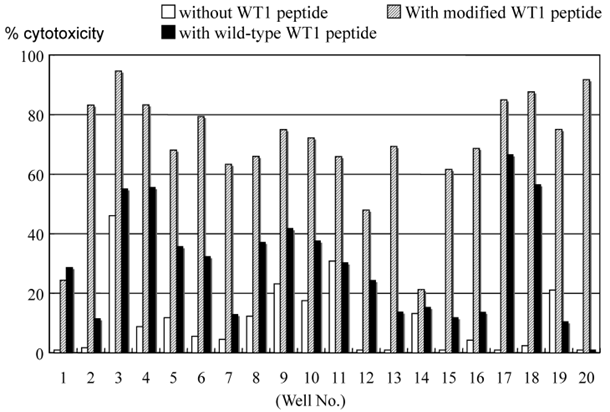 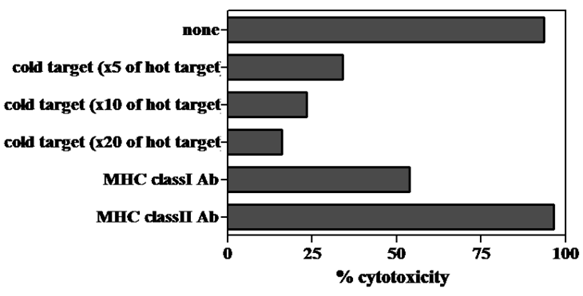 Cytotoxicity assay of MLPC cells against leukemia cells expressing WT1 intrinsically. A CFSE-labeled target cytotoxicity assay was performed by using cells cultured in each well of MLPC for 2 weeks as effector cells and a CML blastic crisis cell line expressing HLA-A*2402, C2F8, as target cells at effector : target ratio of 5:1. MLPC was initiated by using MNCs of PB drawn from a CML patient at 3 weeks after the 2nd administration of WT1 peptide vaccination. 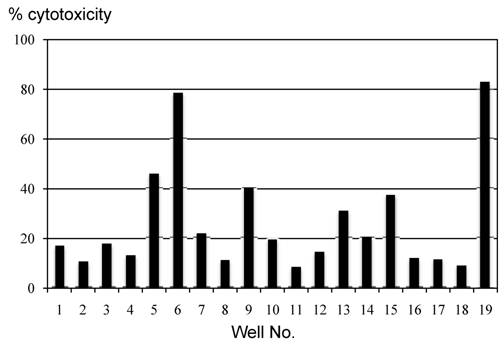 Antigenic Peptide derived from leukemia-associated antigens such as WT1 protein, proteinase-3, receptor for hyaluronic acid-mediated motility (RHAMM) and bcr-abl fusion protein have been demonstrated to induce antigen-specific CTLs against leukemia cells in preclinical studies [10-13]. Preliminary clinical trials using peptide vaccines of these leukemia-associated antigens have shown that the clinical response is associated with generation of antigen-specific CTLs in patients with CML, AML and MDS [14-23]. In the peptide vaccination for patients with CML, Bocchia et al showed further reduction of residual disease with a complete molecular response in CML patients undergoing imatinib treatment by vaccinating six times with bcr-abl-derived peptides plus GM-CSF and GS-21 as adjuvant [17]. Thereafter they reported a longer follow up study suggesting that a 6 month interval between bcr-abl vaccination boosts was too long to maintain an efficient immune control on residual leukemic cells [24]. Rojas et al administered HLA class I-binding bcr-abl peptides alone or with the pan HLA DR-binding epitope (PADRE) to augment CD4+ T cells and reported that the development of an anti-bcr-abl T cell response correlated with a subsequent fall in bcr-abl transcripts [16]. Maslak et al performed a clinical trial administering bcr-abl fusion peptides including modified-type bcr-abl peptides eleven times: five doses biweekly, four doses monthly, and then at 9 and 12 months. Although a T cell response against natural-type bcr-abl peptides was demonstrated even in CML patients treated with modified-type bcr-abl fusion peptides, they could not show that the T cells were capable of killing fresh CML cells or that there were any clear clinical responses that correlated with the immune responses [25]. As to WT1 peptide vaccination for patients with leukemia, WT1 peptide vaccination for AML [20, 26], overt leukemia from MDS, and MDS with myelofibrosis [27] have been previously reported. Kawakami et al reported that vaccination of a secondary chronic myelomonocytic leukemia patient with very low-dose (5 μg/body) of WT1 peptides could generate a WT1-specific CTL response and lead to a reduction of the WT1 transcript level [21]. Recently Razvani et al reported a clinical trial using a combination of PR1 peptides (peptides derived from proteinase 3) and WT1 peptides in patients with myeloid malignancies including AML in complete remission, MDS and CML in the chronic phase. They demonstrated that the post-vaccination emergence of PR1 or WT1-specific CD8+ T cells was associated with a decrease in WT1 mRNA expression. The vaccination consisted of just one subcutaneous administration of the peptides and one CML patient showed a minimal response to the combined PR1 and WT1 peptide vaccination [28]. Qazilbash et al reported vaccination with PR1 peptides and GM-CSF in 10 patients with CML who did not respond to upfront treatment or who experienced relapse of the disease. They showed that 1 patient had cytogenetic CR and three patients refractory to allogeneic transplantation, interferon and imatinib had stable disease with some hematological improvement [22].

By repeated administration of WT1 peptides, Treg cells increased after 20 weeks from the initiation of WT1 vaccination, which was a simultaneous event as increase of bcr-abl transcripts of PB cells. The association of an increase of Treg cells and elevation of bcr-abl transcripts is not clear but it can be easily speculated that Treg cells might play a negative role in anti-tumor immunotherapy as in this case. These data suggested the possible usefulness of treatment for suppressing the function of regulatory T cells in combination with anti-tumor immunotherapy including tumor antigen peptide vaccination.