Objective: Foreign body aspirations comprise the majority of accidental deaths in childhood. Diagnostic delay may cause an increase in mortality and morbidity in cases without acute respiratory failure. We report our diagnostic and compare the relevant studies available in literature to our results.

Methods: In our Hospital, bronchoscopy was performed on 1015 patients with the diagnosis of foreign body aspirations (from 1998 to 2008). Of these cases, 63.5% were male and 36.5% female. Their ages ranged from 2 months to 9 years (mean 2.3 years). Diagnosis was made on history, physical examination, radiological methods and bronchoscopy.

Conclusion: Rigid bronchoscopy is very effective procedure for inhaled foreign body removal with fewer complications. Proper use of diagnostic techniques provides a high degree of success, and the treatment modality to be used depending on the type of the foreign body is mostly satisfactory.

Foreign body (FB) aspirations in childhood are frequently emergency conditions especially in less than 3 years age, comprising an important proportion of accidental deaths [1-3]. Delay in diagnosis and, consequently, a series of chronic pulmonary pathologic conditions may occur in the cases without acute respiratory failure. It is estimated that almost 600 children under 15 years of age die per year in the USA following aspiration of foreign bodies [4]. In fact, choking on food has been the cause of between 2500 to 3900 deaths per year in the USA, when taking both children and adults into consideration [5, 6]. The main symptoms associated with aspiration are suffocation, cough, stupor, excessive sputum production, cyanosis or difficulty in breathing. These symptoms develop immediately after the aspiration [6, 7]. If the event is noticed in time, the child is taken to the hospital for open tube bronchoscopy. If the event is unnoticed and there are no indicative clinical or laboratory findings, the patient can be hospitalized for bronchitis, bronchial asthma or in neglected cases for pulmonitis, with dangerous consequences for the health and life of the patient due to the delayed diagnosis [8].

The majority of aspirated objects are organic in nature, mainly food. Peanuts are the cause most commonly identified by different authors [9-12], but some mention melon and sunflower seeds as the predominant causes [13]. This variation in types of organic materials can be explained by cultural, regional and feeding habit differences. The high incidence of aspirated seeds is related to the absence of molar tooth development between 2 and 3 years of age. This results in an inadequate chewing process, therefore the offering of chunks of food and seeds of any kind to this age group should be avoided. It is also strongly recommended that younger children should not be allowed to play with small plastic or metallic objects. Surprisingly, however, plastic toys are not a frequent cause of FBA in series from developing countries but they represent more than 10% of those identified in the developed world [13- 15].

Management of inhaled foreign body depends on the site of impaction of foreign body. Laryngeal and subglottic foreign bodies need urgent intervention in the form of tracheostomy or urgent bronchoscopy, whereas foreign bodies in the right or left main bronchus cause comparatively less airway problem [16-19]. Rigid bronchoscopy is the recommended procedure in children with suspected FBs. However, flexible bronchoscopy is less invasive, more cost-effective, does not require general anesthesia and seems more helpful in children with insufficient historical, clinical or radiological findings for FBA [13, 14]. This retrospective study was conducted to investigate the incidence of clinically unsuspected FBA in patients who underwent flexible bronchoscopy in our institution; and evaluated the causes resulting in diagnosis of FBA, and the location and type of foreign body, anesthesia methods, complications, and outcome.

In our Hospitals 1015 cases with the diagnosis of FBA were evaluated and treated from January 1988 to November 2008. The study was approved by the Ethics Committee of the Ahwaz Jondishapour University of Medical Sciences and informed parent have signed the consent form of these patients, 644 (63.5%) while 371 were female (36.5%). The average age was 2.3 years (range 2 months-9 years) (Table 1). Plain chest radiography (CXR) was required in all but 162 (16%) patients who underwent immediate bronchoscopy owing to acute respiratory distress following history and physical examination. Computed tomography was used to determine the presence of lung complications due to FB in late period. The most frequently presented symptom was coughing in 845 (83.3%) patients (Table 3). FB was found during bronchoscopy in 96.2% (977 of 1015) of the patients with the history of FBA. Eight of the remaining 38 patients had a history of expectorated FB. A total of 1028 bronchoscopies using a rigid bronchoscope in appropriate size and under general anesthesia were done. Bronchoscopy was repeated once or twice in 11 (1.08%) of cases, for reasons such as the necessity of a recession in bronchoscopy due to the prolongation in the process of removing the FB, and the physical and radiological examinations after bronchoscopy suggestive of the ongoing presence of a foreign body. Prophylactic antibiotics were administered for 1-3 days to the patients who inhaled vegetable matters and had detected findings causing infection. If any specific microorganism was isolated from bronchial lavage taken at the time of bronchoscopy, the treatment continued with appropriate antibiotics. Patients were categorized into two groups according to the elapsed time of referral; those that were within less than 24 hrs were termed 'early', and those diagnosed after 24 hrs or more were termed 'late'. We also did compare all the literature reported FBA with long time course study from different courtiers around the world (Table 6) [22-37].

Duration of enlodgment of foreign body

Presenting history of signs and symptoms

The duration of enlodgment of foreign body ranged from 0 hours to more than 6 month (Table 2). In fifty seven patients recovery was un-eventful except mild laryngeal edema which was treated by steroids and humidified air. We had mortality in two patients due to brain anoxia. Sixty patients had multiple FBs in both right and left bronchus. Mostly patients were discharged from hospital on third day. Seven hundred-forty one patients (73.03%) presented with cough, 134 patients (13.18%) had cyanosis and 47 patients (4.64 %) had dyspnea as shown in table 3. Rare cases (Figure) were removed by appropriate tools and techniques under bronchoscopy. A cylinder-shaped plastic whistle removed from the main right bronchus by a grasper forceps (Figure 1A), a thumbtack was removed by using a crocodile forceps (Figure 1B), a sharpener was removed by a cup forceps (Figure 1C), and the dental piece FB was extracted (Figure 1D). 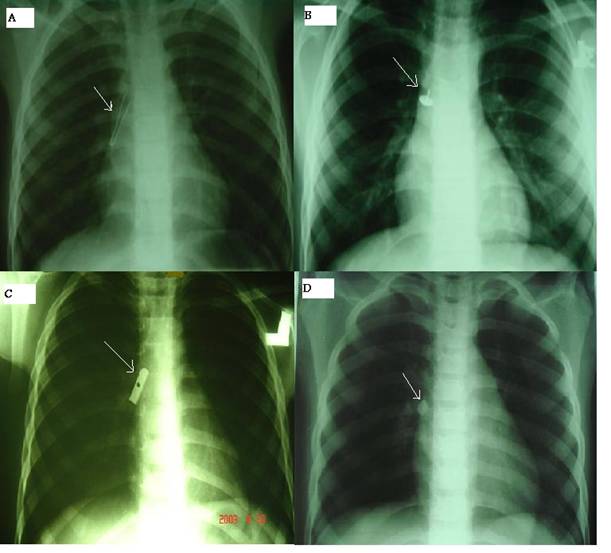 Foreign body aspiration is frequently encountered in pediatric practice; however, the condition is often not diagnosed immediately because there are no specific clinical manifestations. Usually, there is a suggestive history of choking, although the classic clinical presentation, with coughing, wheezing, and diminished air inflow, is seen in less than 40% of the patients; other symptoms include cyanoses, fever, and stridor. Sometimes, FBA can be completely asymptomatic. The evolution of FBA can lead to variable degrees of respiratory distress, atelectasis, chronic coughing, recurrent pneumonia, and even death [38, 39]. Previous reports indicate that male gender is present in 60—66% of cases and children in the first and second year of life are predominantly affected [40, 41]. In this study the frequency of FBA in male was 63.5% and the ages 1 to 3 years were predominantly affected. The most common foreign body inhaled, Symptoms, most frequent age, and type of inhaled foreign body are different from region to region across the world.

Bronchoscopy should be used as a diagnostic method in cases where the possibility of FB aspiration cannot be ruled out through history, physical and radiological examination. Upon diagnosis, early bronchoscopy is necessary because the earlier the bronchoscopy the lesser the complications. Some children with respiratory complaints wrongly have long been receiving treatment for pneumonia or asthma only because these current diagnostic methods were ineffective. Their definite diagnosis and treatment were provided by bronchoscopy, which was resorted to after unresponsiveness to previous treatment. Dikensoy et al. reported that morbidity evaluated in cases where medical treatment without bronchoscopy was used curatively [42].

Ventilation in the other bronchial system is more reliable even if it prolongs the duration of bronchoscopy. On the contrary, the attempts to remove a large piece at a time require that the bronchoscope be pulled out together with the piece and necessitate a further bronchoscopy to check for additional FBs in the distal segment. In FBA, bronchiectasis and pulmonary damage can occur as complications of the late period [43]. Bronchoscopy in children under 12 months requires skill because technical difficulties due to small instrumentation and bronchospasm commonly occur when compared to older children. Boorish contact of the bronchoscope or forceps with the bronchial wall, and the prolongation of bronchoscopy can be considered to be factors which contribute to spasm. It has been reported that a bronchoscope with appropriate diameter should be chosen and the procedure should be limited to 20 min in order to avoid possible sub-glottic and laryngeal edema and bronchospasm after bronchoscopy [44].

Previous reports indicate that male gender is present in 60—66% of cases and children in the first and second year of life are predominantly affected [45-47]. Our data regarding the incidence, gender, and age of patients with foreign body aspiration were consistent with the literature. Aspirated foreign bodies can be classified into two categories, organic and inorganic. Most of the aspirated foreign bodies are organic materials, such as nuts and seeds in children, and food and bones in adults. The most common type of inorganic aspirated substances in children are beads, coins, pins, small parts of varies toys, and small parts of school equipment such as pen caps [48]. As we listed the different type of foreign bodies in Asian countries such as India, [22] China, [36] and Turkey [23] the most common were organic type include peanut, ground and dried nuts, while in European countries such as Italy [25] and Kosovo [30] the most common were organic type include dried nuts as well as inorganic type in some countries like Spain [33]. The most common at risk age found less than 3 years in most reported paper that was in agreement with our study [22 - 37].

Pneumonia, the most frequent complication after bronchoscopy in the literature [29], occurs in only 2.9% (29/1015) patients out of our cases because of the intensive antibiotics, chest physiotherapy, and cool mist provided, especially after the aspiration of oily seeds. FBA, one of the leading causes of accidental child deaths at home, does rarely cause deaths after the victim is safely brought to hospital, did not occur in our cases because of the intensive cares and immediate bronchoscopy [44]. FBA can be identified using the existing diagnostic methods and, if the methods of removal are appropriate for the type of the FB is used, favorable outcomes with lower mortality and morbidity rates will be seen. Most frequently, aspirated objects are food, which is involved in 75% of the cases; other organic materials, such as bones, teeth, and plants, 7%; non-organic materials, such as metals and plastics, 13%; rocks, 1%; and toys or parts of toys, 1% [49]. In our research the most common FB was seed.

Almost 40% of our patients were diagnosed as having FBA 24 hrs after onset of symptoms. The delayed diagnosis rate in our locality was high compared to rates of 17% and 23% reported in other Asian studies [50, 51]. One possible reason for a delayed diagnosis was that parents were not aware of the significance of sign and symptoms such as cough and choking. Because the children usually do not have severe symptoms immediately after the choking, parents may not seek medical help until there is a persistent cough and fever. Young children below the age of 3 years are particularly at risk of aspiration, as demonstrated in our study as well as others [50, 28].

In conclusion, diagnosis of FBA in children is difficult, because its presentation can be mistaken as asthma or respiratory tract infection, which leads to delayed diagnosis and treatment, and can result in intrabronchial granuloma formation. Therefore, early rigid bronchoscopy is very effective procedure for inhaled foreign body removal with fewer complications. Although the rate of mortality resulting from foreign body aspiration is low, cooperation amongst pediatricians, radiologists, and ENT specialists is required for rapid diagnosis and treatment.