Objective: The effects of replacing cisplatin (CDDP) with cis-diammineglycolatoplatinum (nedaplatin, NDP), a second-generation platinum complex, on the pharmacokinetics of 5-fluorouracil (5-FU) were investigated in Japanese patients with esophageal squamous cell carcinoma, who were treated with a definitive 5-FU/CDDP-based chemoradiotherapy.

A clinical report published in 1999, the RTOG (Radiation Therapy Oncology Group) 85-01 trial involving 134 patients with T1-3, N0-1 and M0 esophageal cancer, is of great interest in terms of clinical outcome because it demonstrated a 5-year survival rate of 26 % [1-4]. This treatment consists of infusion of 5-fluorouracil (5-FU) and cisplatin (CDDP), and concurrent radiation, without pre- or post-surgical resection. Simultaneously in Japan, a modified version was proposed by Ohtsu and his co-workers for advanced metastatic esophageal cancer [5,6]. Two independent clinical investigations have shown curative potential using this regimen for unresectable esophageal squamous cell carcinoma (ESCC) with T4 or M1a [5,6]. A long-term evaluation of efficacy and toxicity with 139 patients resulted in a complete response (CR) rate of 56%, along with a 5-year survival rate of 29% [7-9]. Currently, a definitive 5-FU/CDDP-based chemoradiotherapy (CRT) is recognized as one of the most promising treatments for esophageal cancer [10].

A series of studies has been performed to find a marker predictive of clinical outcome after treatment with a definitive 5-FU/CDDP-based CRT [11-13]. A total of 8 measurements of the plasma concentration of 5-FU were made per patient, and it was concluded that the average value was predictive of clinical response, but not of severe acute leucopenia, stomatitis and cheilitis. Additionally, it has been suggested that clinical response and severe acute toxicities may be predicted on the basis of genetic polymorphisms.

CDDP is one of the antitumor agents most widely used against several types of solid tumors. However, its clinical use is limited by its potent nephrotoxicity, which can lead to acute renal failure. Nedaplatin (NDP), cis-diammineglycolatoplatinum, is a second-generation platinum complex that is approximately 10 times as soluble in water as CDDP [14-16]. As such, NDP is considered to have more pronounced activity against solid tumors, but less nephrotoxicity and gastrointestinal toxicity than CDDP [14]. In phase II clinical studies, NDP was found to be highly effective against solid tumors, including non-small cell lung cancer, small cell lung cancer, head and neck cancer and esophageal cancer [15]. The replacement of CDDP with NDP might be of value for a certain subpopulation of patients. Although little information is yet available, it was recently reported that NDP was comparable to CDDP with regards to clinical response and survival, and also to acute and late toxicity in the treatment of ESCC [16]. In this study, the effects of replacing CDDP with NDP on the pharmacokinetics of 5-FU were investigated in ESCC patients treated with a definitive 5-FU/CDDP-based CRT.

Fifty-six ESCC patients were enrolled in this study based on the following criteria: 1) ESCC treated at Kobe University Hospital from August 2002 to June 2006; 2) clinical stage T1 to T4, N0 or N1, and M0 or M1a according to the International Union Against Cancer tumor node metastasis (TNM) classification; 3) age less than 85 years; 4) an Eastern Cooperative Oncology Group performance status of 0 to 2; 5) adequate bone marrow, marrow, renal, and hepatic function; 6) no prior chemotherapy; 7) no severe medical complications; and 8) no other active malignancies (except early cancer). The tumors were histologically confirmed to be primary, and no patients with recurrence were included in this study.

The protocol is presented in Figure 1. A course consisted of continuous infusion of 5-FU at 400 mg/m2/day for days 1-5 and 8-12, infusion of CDDP or NDP at 40 mg/m2/day on days 1 and 8, and radiation at 2 Gy/day on days 1 to 5, 8 to 12, and 15 to 19, with a second course repeated after a 2-week interval [5,6]. If disease progression/recurrence was observed, either salvage surgery, endoscopic treatment, or another regimen of chemotherapy was scheduled. Forty-nine of 56 patients were treated with CDDP (the CDDP group), and the remaining 7 patients were treated with NDP (the NDP group). This study was conducted with the authorization of the institutional review board and followed the medical research council guidelines of Kobe University.

Aliquots (5 mL) of blood were collected into etylenediaminetetraacetic acid-treated tubes at 5 PM on days 3, 10, 38 and 45, and at 5 AM on days 4, 11, 39 and 46 [11-13]. The plasma concentration of 5-FU was determined by high-performance liquid chromatography as described previously [11-13]. The apparent elimination half-life of 5-FU is approximately 10 minutes [17], and the plasma concentration will reach a steady-state within a few hours of starting continuous infusion. The systemic exposure to 5-FU during each of 4 cycles was assessed as the area under the concentration time curve for 120 hours (AUC120h), calculated as 120 hours x the average of 2 measurements within a cycle.

A CR was defined as the complete disappearance of all measurable and assessable disease at the first evaluation, which was performed 1 month after the completion of CRT to determine whether the disease had progressed. The clinical response was evaluated by endoscopy and chest and abdominal computed tomography (CT) scans in each course. A CR at the primary site was evaluated by endoscopic examination when all of the following criteria were satisfied on observation of the entire esophagus: 1) disappearance of the tumor lesion; 2) disappearance of ulceration (slough); and 3) absence of cancer cells in biopsy specimens. If small nodes of 1 cm or less were detected on CT scans, the recovery was defined as an “uncertain CR” after confirmation of no progression for at least 3 months. An “uncertain CR” was included as a CR when calculating the CR rate. When these criteria were not satisfied, a non-CR was assigned. The existence of erosion, a granular protruded lesion, an ulcer scar, and 1.2 w/v% iodine/glycerin-voiding lesions did not prevent an evaluation of CR. The evaluations were performed every month for the first 3 months, and when the criteria for CR were not satisfied at 3 months, the result was changed to non-CR. Follow-up evaluations were performed thereafter every 3 months for 3 years by endoscopy and CT scan. After 3 years, patients were seen every 6 months. During the follow-up period, a routine course of physical examinations and clinical laboratory tests was performed to check the patient's health.

A definitive 5-FU/CDDP-based CRT is associated with acute toxicities, predominantly leucopenia, stomatitis, and cheilitis [5-9,18]. Toxicity was evaluated using criteria defined by the Japan Clinical Oncology Group [19]. These criteria were based on the National Cancer Institute Common Toxicity Criteria. Toxicity was assessed on a 2 to 3 day basis during the CRT and subsequent hospitalization period and on every visit after the completion of CRT. Episodes of leucopenia, stomatitis, and cheilitis during the first 2 courses and subsequent 2 weeks (until day 70) were recorded as acute toxicities and those of grade 3 or more as severe acute toxicities.

All values reported are the mean±standard deviation (SD). The association of disease stage with the rates of CR and severe acute toxicities were analyzed with Fisher's exact test. Circadian variations of plasma concentrations of 5-FU were analyzed with the Wilcoxon signed-rank test. The unpaired Student's t-test/Welch's test or Mann-Whitney's U test was used for two-group comparisons of the plasma concentrations or AUC120h values of 5-FU. P values of less than 0.05 (two tailed) were considered to be significant.

The results of clinical outcome are summarized in Table 2. The overall CR rate was 44.6%, and depended on disease stage; 84.6%, 70.0%, 27.3% and 9.1% for stage I, II, III and IVa, respectively (P<0.05). NDP was comparable to CDDP with respect to clinical response, but the treatment with NDP achieved a CR at stage IVa (data not shown). Episodes of severe acute leucopenia, stomatitis and cheilitis occurred in 42.9%, 12.5% and 14.3% of cases, respectively, and each rate was independent of disease stage (data not shown). Replacement of CDDP with NDP had no effect on the rates of these severe acute toxicities (data not shown).

The values are the mean±SD, with the range in parentheses. TNM score: tumor, node, metastasis. Patients with noncervical primary tumors with positive supraclavicular lymph nodes were defined as M1a.

CDDP: cisplatin, NDP: nedaplatin. Systemic exposure to 5-FU was assessed as the AUC120h, calculated as 120 hours x the average of 2 measurements. There was no significant difference between the 2 groups at each of the 4 cycles.

Plasma Concentrations of 5-Fluorouracil (5-FU) in the Patients with and without a Complete Response (CR).

CDDP: cisplatin, NDP: nedaplatin. The average of 8 measurements made per patient is listed as the data. In the CDDP group, plasma concentrations of 5-FU were significantly higher in the patients with CR than those without (non-CR), but the inclusion of 7 patients treated with NDP resulted in no significant differences.

Plasma Concentrations of 5-Fluorouracil (5-FU) in the Patients with and without Severe Acute Leucopenia.

CDDP: cisplatin, NDP: nedaplatin. The average of 8 measurements made per patient is listed as the data. There was no difference between the patients with and without severe acute leucopenia, in either group. 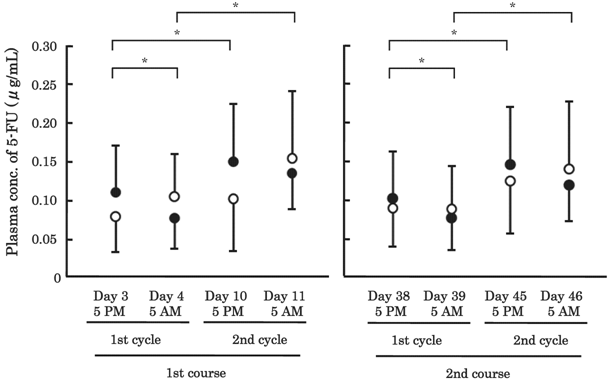 Esophageal cancer is the 8th most common cancer in the world and one of the most lethal [10]. Symptoms include dysphagia, odynophagia, and progressive weight loss. The two predominant histological subtypes are adenocarcinoma and squamous cell carcinoma, and treatment depends on the location of the primary tumor, the disease stage, patient characteristics and co-morbidities, and occasionally, histological subtype. There is no consensus on an optimal treatment strategy for esophageal cancer, and treatments include surgical procedures, radiation, chemotherapy, and combinations thereof [10]. In patients with localized squamous cell carcinoma, a definitive 5-FU/CDDP-based CRT is one of the most promising ways to achieve a complete pathologic response. The treatment might be improved further through modification of the treatment schedule, dose escalation and the replacement of 5-FU and CDDP. Capecitabine or tegafur/uracil might provide better results than 5-FU, and oxaliplatin and NDP are potential substitutes for CDDP.

In this study, we investigated the effects of replacing CDDP with NDP in 56 ESCC patients treated with a definitive 5-FU/CDDP-based CRT, and found no significant differences in clinical outcome, i.e., the CR rate and the severe acute toxicities, in the NDP group, when compared with the CDDP group. Although multi-center, cross-over style clinical investigations should be conducted on the replacement, NDP may be beneficial to ESCC patients, especially those with renal disease. Yamashita et al. [16] also reported that NDP did not differ from CDDP with regards to overall survival, progression-free survival and severe acute leucopenia in the treatment of locally advanced and metastatic esophageal cancer.

Herein, it was clarified that NDP has substantial effects on the pharmacokinetics of 5-FU. It is well-known that there is a circadian rhythm in drug metabolism, cellular proliferation and physiological function, and the suprachiasmatic nuclei, a hypothalamic pacemaker clock, is important for the rhythm [20-22]. As a result, both the toxicity and efficacy of over 30 anticancer agents vary as a function of dosing time [20-22]. More than 80 % of the administered 5-FU is eliminated by the rate-limiting enzyme, dihydropyrimidine dehydrogenase (DPD). The DPD activity is found in most tissues, but is highest in the liver. The activity of DPD of diurnally active cancer patients varies significantly during a 24-hour time period, and is greatest from midnight to early morning [21-24], being consistent with the findings of this study. However, in the NDP group, the pattern of circadian rhythm in 5-FU pharmacokinetics was certainly different from that in the CDDP group, although the AUC120h values were not altered (Table 3). The interaction of DPD with CDDP might be different from that of NDP, but there is no rational explanation for these phenomena. Further clinical and non-clinical investigations should be conducted.

In conclusion, only a small number of patients were enrolled in this study, especially in the NDP group, and we had no conclusions on the replacement of CDDP with NDP in terms of clinical outcome after the definitive 5-FU/CDDP-based CRT. The circadian rhythm in plasma concentrations of 5-FU observed with CDDP was altered when NDP was used instead, and clinical response can be predicted on the basis of the plasma concentrations of 5-FU in the CDDP group, but not in the NDP group.

This work was supported in part by a Grant-in-Aid for Scientific Research and Service Innovation Program from the Ministry of Education, Culture, Sports, Science and Technology of Japan.

22. Altinok A, Lévi F, Goldbeter A. Identifying mechanisms of chronotolerance and chronoefficacy for the anticancer drugs 5-fluorouracil and oxaliplatin by computational modeling. Eur J Pharm Sci. 2009;36:20-38