Klebsiella pneumoniae isolated in community-acquired pneumonia is increasingly found in primary pyogenic liver abscesses. The presence of magA in K. pneumoniae has been implicated in hypermucoviscosity and virulence of liver abscess isolates. The K2 serotype has also been strongly associated with hypervirulence. We report the isolation of non-magA, K2 K. pneumoniae strain from a liver abscess of a Saint Kitt's man who survived the invasive syndrome.

Klebsiella pneumoniae is often isolated in hospital-acquired urinary tract infections, septicemias, pneumonia, and intra-abdominal infections [1]. Although bacterial liver abscesses are rare, K. pneumoniae is one of the leading etiologic agents [2]. Since 1981, a distinct clinical syndrome of septicemia with liver abscess and metastatic infections due to K. pneumoniae has emerged, with a predominance of cases in Taiwan [3-6]. The invasive K. pneumoniae liver isolates associated with this syndrome more often exhibited a hypermucoviscosity and belong to either the serotype K1 or K2 [5, 6]. The presence of a mucoviscosity associated gene A (magA) has also been shown to more prevalent in strains isolated from human liver abscesses and are only associated with the K1 serotype [7]. The presence of the K2 capsule-associated gene A (k2A) is associated with K2 isolates which are also hypervirulent [8]. We report the first case of a hypervirulent non-magA, K2 K. pneumoniae liver isolate found in a man from Saint Kitts, a Caribbean island.

A 49 year-old Afro-Caribbean man from the island of Saint Kitts presented to a Saint Kitts hospital with a two-day history of fever, left shoulder pain, mild headache, vomiting and watery diarrhea. The patient had no significant medical history including no diagnosis of diabetes mellitus, no recent travel history, and denied alcohol, tobacco, or drug use. There had been a recent outbreak of dengue fever in Saint Kitts. On admission, the physical examination revealed dehydration and mild right basilar rales by pulmonary auscultation. Laboratory studies showed a normal white blood cell count, hemoglobin, platelets, (5,900/mm3, 13.1 g/dL, and 146,000/mm3, respectively), but elevated serum glutamic oxaloacetic transaminase (SGOT) 88 U/L (normal levels: 15-37 U/L), and serum glutamic pyruvic transaminase (SGPT) 79 U/L (normal levels: 30-65 U/L). While in the hospital, the patient had daily spiking fevers. Four days after admission, he developed acute respiratory distress that required intubation. Chest X-ray showed bilateral pulmonary infiltrates, mainly in the upper lobes. The patient was started empirically on vancomycin and cefepime. Follow-up laboratory studies demonstrated a rising white blood cell count of 13,200/mm3 with an increase in immature neutrophils (a left shift) suggesting acute inflammation. He developed thrombocytopenia with a platelet count of 36,000/mm3 (normal levels: 150,000 to 400,000/mm3) and prolonged coagulation studies with a prothrombin time (PT) and partial thromboplastin time (PTT) of 34 (normal: 11-13.5) and 47 (normal: 25-35) seconds, respectively. The patient's IgM and IgG serology for dengue fever were positive. His condition continued to worsen. He was transfused multiple units of fresh frozen plasma and platelets to maintain hemodynamic stability.

On day eight, he was airlifted to Mount Sinai Medical Center, a tertiary care facility in Miami Beach, Florida, for further management. Upon arrival, he was afebrile (T 98.0°F), bradycardic (38 beats per minute), intubated, and unresponsive. Physical examination revealed diffuse rhonchi bilaterally and right upper quadrant tenderness. Endopthalmitis was specifically sought and was not present in this patient. The remainder of the physical examination was unremarkable. Blood cultures drawn at this time were negative. The initial working diagnosis was dengue fever. Subsequently, a computed tomographic (CT) scan of the abdomen revealed multiple liver abscesses with possible necrosis with the largest measuring abscess (Figure 1a). Entamoeba titers were negative. Blood cultures drawn three days after admission grew K. pneumoniae. The susceptibility pattern for the K. pneumoniae was not unusual. It was resistant to ampicillin and intermediate to ampicillin/sulbactam. It was sensitive to the cephalosporins (cefazolin, cefotaxime, and cefepime), the fluoroquinolones (ciprofloxacin, levofloxacin), the aminoglycosides (amikacin, gentamicin, and tobramycin), meropenem, pipercillin/tazobactam and trimethoprim/sulfa. At this point, the patient was started on meropenem. The initial CT scan of the brain done on arrival to Mount Sinai was negative. However, follow-up CT of the brain seven days later showed a 2.7 cm abscess located in the frontal lobe. Two days later an additional lesion developed in the left parietal region (Figure 1c). 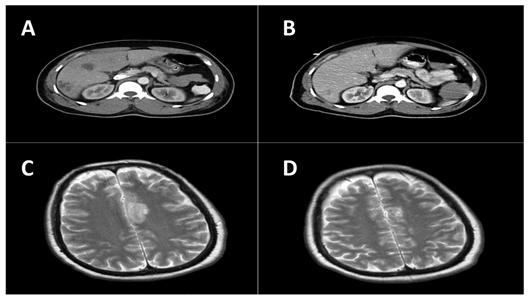 The patient underwent CT-guided drainage and biopsy of the largest liver abscess. The biopsy demonstrated abundant acute and chronic inflammation with surrounding necrosis consistent with a liver abscess. A sample aspirated from the liver was submitted for culture. The Gram stain of the material showed many neutrophils, but no organisms. On the third day of culture, there was growth of a mucoid Gram-negative lactose-fermenting bacillus identified as Klebsiella pneumoniae. This isolate, henceforth referred to as FIUMS1, had a characteristic hyperviscous phenotype as demonstrated by the formation of elongated (>5 mm) mucoviscous strings when a loop was passed through a colony. Subsequently, his antibiotic was changed to ceftriaxone. Three weeks after admission, he became afebrile, was extubated, and the brain and liver lesions improved radiologically (Figure 1b and 1d). He returned to Saint Kitts where he remained clinically stable and completed six weeks of antibiotic treatment.

Klebsiella pneumoniae, a member of the Enterobacteriaceae family, is a Gram-negative enteric bacillus that forms large mucoid colonies. Though rare, this organism has been associated with bacterial liver abscesses and metastatic infections with a predominance of cases in Taiwan [2]. This syndrome has several distinguishing characteristics from traditional liver abscesses including its community-acquired origin, absence of underlying hepatobiliary diseases, and the presence of other invasive complications including endophthalmitis, suppurative meningitis, brain abscess, necrotizing fasciitis, and osteomyelitis [4]. Fang et al. reported that the invasive K. pneumoniae strains associated with this syndrome more often exhibited a hypermucoviscosity phenotype as demonstrated by “extreme stickiness of these colonies on agar plate” producing a positive string test [9]. The hypermucoviscosity phenotype is highly associated with community-acquired K. pneumoniae bacteraemia that leads to distinctive invasive syndromes such as liver abscess, meningitis, pleural empyema or endophthalmitis [5].

Liver isolates belong to either serotype K1 or K2 [6, 10]. Recently, a number of genes have been identified as potential markers of virulence, including magA, which has a high association with the K1 serotype and is more prevalent in strains isolated from human liver abscesses [7]. The K2 serotype can be detected by the presence of k2A [8].

The presence of magA from the K. pneumonia FIUMS1 (16S rRNA sequence deposited as GenBank accession number FJ436718) was determined using PCR. The 1,282 bp gene was amplified using the magA Forward Primer (5'-GGT GCT CTT TAC ATC ATT GC-3') and magA Reverse Primer (5'-GCA ATG GCC ATT TGC GTT AG-3') [7]. A magA product was not detected in the strain. To test for the K2 serotype, k2A (523 bp) was amplified using the forward primer (5'-CAA CCA TGG TGG TCG ATT AG-3') and the reverse primer (5'-TGG TAG CCA TAT CCC TTT GG-3') [8]. The k2A fragment of 523 bp was detected (data not shown). These results demonstrate that this pathogenic strain has a K2 serotype [11]. Though magA has been implicated in the hypermucoviscosity phenotype, the magA gene has only been identified in 24% of clinical isolates [5]. Thus, it is not surprising to find the K. pneumoniae FIUMS1 is magA-negative. In addition, the K2 serotype of K. pneumoniae is the second most common type of strain isolated from liver abscesses [8].

In conclusion, through culture methods and 16S rRNA sequencing, the strain isolated from the liver abscess was verified as K. pneumoniae. The dengue viral pneumoniae may have predisposed the St. Kitts patient to the subsequent K. pneumoniae infection [12, 13]. The absence of magA gene and the presence of k2A in this isolate indicate that the hypervirulence of the strain is due to the K2 capsule. This form of K. pneumoniae has not been previously noted on the island of St. Kitts. Earlier identification of an infection caused by this hypervirulent serotype should result better patient prognosis.

Sequencing was performed at the Florida International University DNA Core (Miami, Fl). MSD is funded by MBRS Research Initiative for Scientific Enhancement (RISE) Program NIH\NIGMS R25 GM061347. We would like to thank Steve Libby (University of Washington, Seattle, WA) for the K. pneumoniae control strain. We are extremely grateful to Dr. J. Patrick O'Leary for his invaluable editorial suggestions.

The authors have declared that no conflict on interests exists.