Two-stage reconstruction using an antibiotic loaded cement spacer is the preferred treatment method of late hip joint infections. Hip spacers maintain stability of the joint and length of the limb during treatment period. However, as the material strength of bone cement (PMMA) is limited, spacer fractures led to serious complications in the past. This study investigated the load capacity of custom made hip spacers, developed at the 'Klinik für Orthopädie und Orthopädische Chirurgie' (Universitätsklinikum des Saarlandes, Homburg / Saar, Germany), and implanted into composite femurs. In a quasi-static test, non-reinforced spacers tolerated hip joint loads of about 3000 N, whereas reinforced spacers with titanium-grade-two endoskeletons doubled this load up to 6000 N. Even for cyclic loading, endoskeleton-including hip spacers tolerated loads of >4500 N with 500,000 load cycles. Thus, an endoskeleton-including spacer should provide a mobile and functional joint through the treatment course. A generated FE-model was used to determine the fracture stresses and allows for further sensitivity analysis.

The application of a spacer made of antibiotic impregnated bone cement (PMMA) is a recommended treatment method in the two-stage reimplantation procedure for late hip joint infections [1-5]. An antibiotic-impregnated cement spacer delivers a high-dose concentration of local antibiotics to the infected area, prevents soft tissue shortening and provides better function than a resection arthroplasty. Although few commercially made, pre-formed hip spacers are available, they lack adaptability [6, 7]. The 'Klinik für Orthopädie und Orthopädische Chirurgie' (Universitätsklinikum des Saarlandes, Homburg / Saar, Germany) developed therefore a special moulding form whereby a standardized, antibiotic-loaded cement spacer adapted to patient infection can be formed during surgery [8-10]. As spacers are capable to eradicate the infections, complications include fractures of spacers [11-13]. This study evaluates therefore the strength of non-reinforced spacers and spacers having an adapted endoskeleton when implanted into composite femurs.

The bone cement Palacos® (Merck, Darmstadt, Germany) was used for our spacers. It is distinguished because of its very high antibiotic release rate with comparative high material strength [14-16]. To form a single spacer (head diameter, 50 mm; stem length, 100 mm; surface area, 13,300 mm2), a mixture of 80 g powder into 40 ml liquid was hand mixed without vacuum. In order to keep variety as low as possible, plain cement, i.e. cement without antibiotic has been used for mechanical testing. Spacer were formed into a 2-parts molding form out of polyoxymethylene (POM) [17] (Fig.1). After filling but before consolidation, an endoskeleton made of titanium-grade-two (Euro-Titan AG, Solingen, Germany) could be centered into the cement spacer for reinforcement (Fig. 2).

Two components of Palacos®: powder (polymer) and liquid (monomer) are mixed in a ratio of 2g : 1ml. After mixing, the compound is filled into a casting mould of polyoxymethylene (POM) to form the spacer. 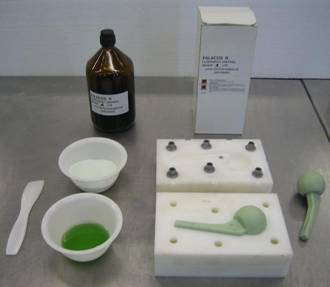 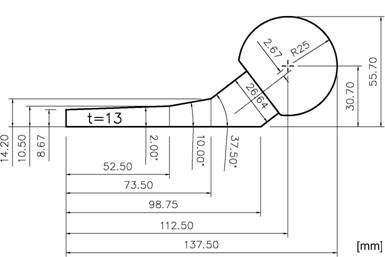 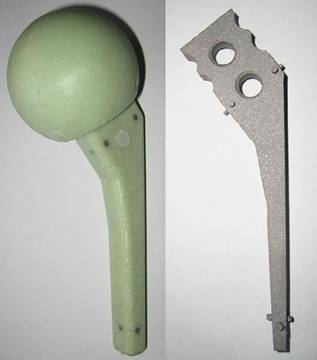 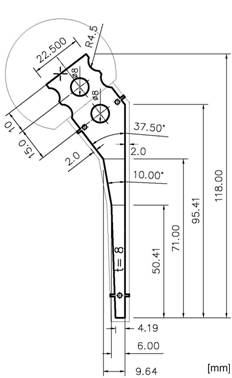 Titanium grade two was chosen because of its biocompatibility, very high strength and ductility. For testing, non-reinforced and reinforced spacers were implanted into fourth generation composite femurs (Sawbones AB, Malmö, Sweden) that had the femoral head removed and canal reamed. As there is no standardized protocol of testing the mechanical behaviour of a hip spacer available, the loading procedure was defined following the recommendations of the ISO 7206 standard for determination of fatigue performance of hip stems [18]. The femurs were inclined 10° in the frontal plane and 9° in the sagittal plane and loaded using an INSTRON servo-hydraulic testing machine (Instron, Darmstadt, Germany). Loads are applied through the femoral head of the spacer, where shear loads were eliminated by means of a ball bearing cup (Fig. 3).

Test bed for an implanted spacer in a composite femur on a servo-hydraulic cylinder test station (Instron, PL10K). The femur is oriented at 9° in the sagittal plane and 10° in the frontal plane. 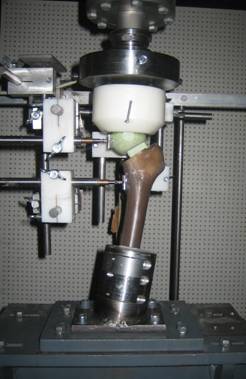 To keep friction as low as possible, the interface between cup (POM, d = 120 mm) and spacer head (PMMA) is furthermore lubricated (Shell 138 Retinax CS 00). The loading rate of the quasi-static test was 20 N/s. Cyclical tested spacers were sinusoidally loaded with a frequency of 5 Hz. Test abort was either failure of the spacer or the femur. Three specimens were tested in each test series.

Based on the laboratory tests, a finite element model of spacer and femur was developed to analyze stresses. The analysis was performed using ANSYS, a FEA software (ANSYS Inc., Canonsburg, United States). The standardized femur was used as a basis for a finite element model of a composite femur [19]. An IGES file of the spacer with/without endoskeleton was placed within the composite femur geometry. Meshing was conducted by the element 186, a hexahedral solid element with quadratic displacement behaviour (Fig. 4). For modeling the contact and sliding between femur-spacer interface, CONTACT 174 and TARGET 170 elements were used. The material properties are given in Table 1. The femur is separated into two materials, cortical and cancellous bone. The bone materials were assumed to be isotropic and homogeneous (Table 1).

Loading is similar to the laboratory tests, muscle forces affecting the strain distribution on the femur were neglected. The resultant hip force FR on the head of the spacer can be resolved into:

Finite element model of the spacer and femur with meshing conducted by the solid element 186. 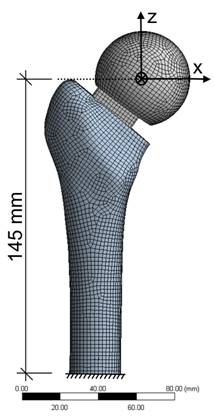 Non-reinforced spacers, implanted into composite femur and quasi-static tested failed at FR = 2935 ± 322 N (Fig. 5). Spacer fracture occurred between 65 - 75 mm proximal to the spacer tip with the stem remaining in the medullary canal. Mechanical spalling of a bone edge and tears on the proximal femur could be observed after testing.

Spacers with an endoskeleton sustained loads up to FR = 6270 ± 772 N and thus doubled the initial load of non-reinforced spacers. Thereby loads exceeding 5000 - 6000 N caused a non-linear displacement behaviour of the reinforced spacer and resulted into periprosthetic fractures of the proximal part of the femur (Fig. 6). Fracture was of explosion type where the spacer is loose and the fracture is inherently unstable. Reinforced spacer, cyclical loaded with 500,000 load cycles per load level could even resist maximum loads between FR = 4700 - 4900 N before failure (Table 2). 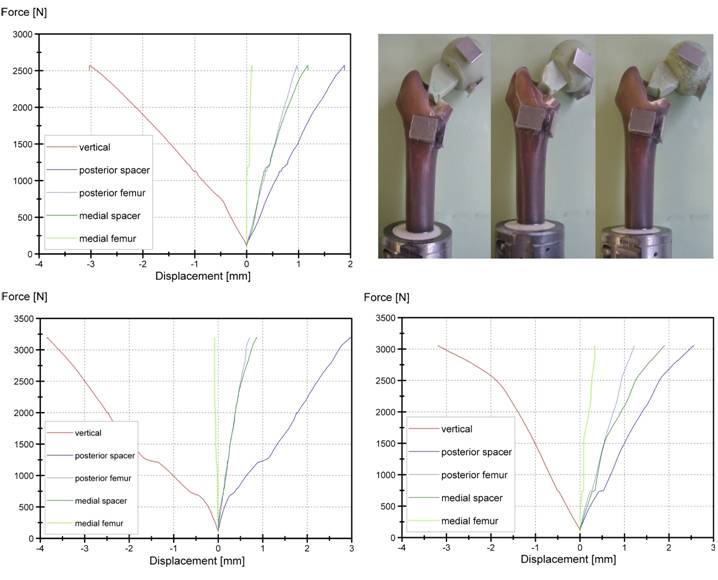 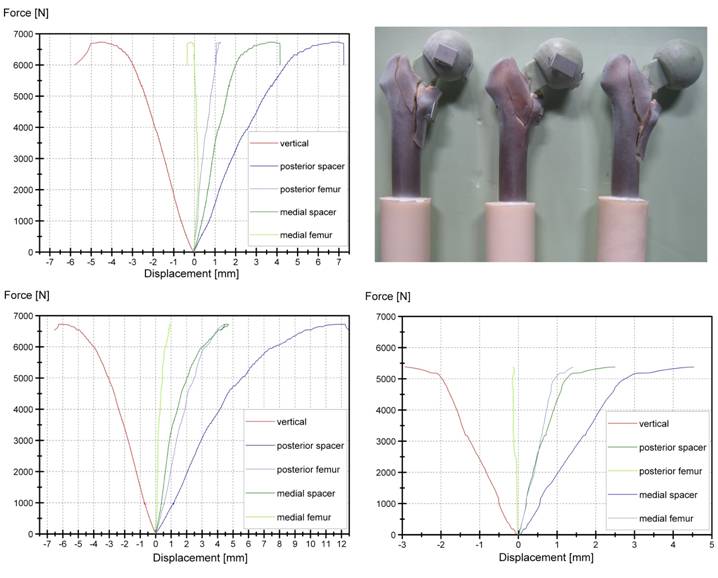 The locations where the maximum stresses occur on femur and spacer, respectively, are in accordance to the fractures within the laboratory tests. The maximum equivalent stresses on a non-reinforced spacer reached the breakage stress (bending strength of Palacos®: 50-60 MPa) at about FR = 3000 N (Fig. 7a). In case of a reinforced spacer, the stresses are distributed according to the material stiffnesses, and, hence, the endoskeleton carries the main load. The yield strength of the titanium endoskeleton (325 MPa) is reached at a hip joint load of FR = 5000 N (Fig. 7b). However, as titanium-grade-two is a quite ductile material, there are still plastic material reserves available. The peak stresses on the femur located above the lesser trochanter produce stress values of 120 MPa and 153 MPa, respectively, and should be considered to indicate damage initiation events of periprothetic fracture. 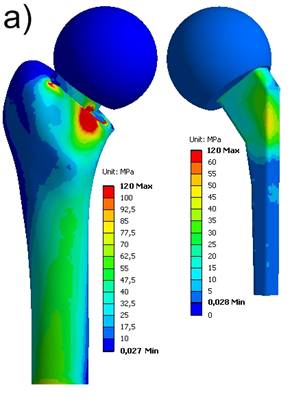 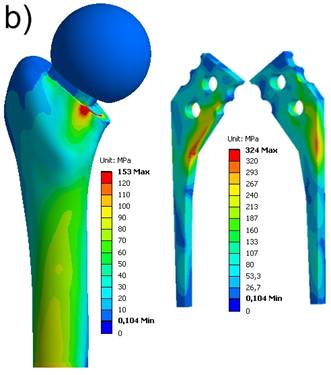 As shown, non-reinforced spacers are significantly weaker than endoskeleton-including hip spacers. A previous study determined the quasi-static breaking load for non-reinforced hip spacers by 800 - 1000 N, in case that 60 mm of the stem length is embedded into polyurethane [12]. Compared to the former study, loads could be significantly increased by changing the boundary conditions from a more conservative approximation to a fixation where the distal and proximal parts of the spacer-stem are supported by using a composite femur. The suitability of the composite femur has been demonstrated by Cristofolini et al. [20] who showed that no significant differences in mechanical behaviour were found between composite femora and two groups of cadaveric specimens, while the inter-femur variability for the composite femur is highly reduced. Considering a hip resultant force of 3-4 times body weight during walking [21, 22], non-reinforced spacer can possibly withstand the loads if conditions are ideal. Nevertheless, fracture occurred occasionally on non-reinforced spacers, even if the proximal femur was in good condition [11]. The influence of cement porosity may dominate the effect of the stress to a degree that failure may occur earlier at lower stress levels as well [16]. Washed out antibiotics increases the number of pores and reduces the strength as well [16]. However this effect is negligible for endoskeleton including spacers and the use of plain cement, i.e. Palacos® without antibiotic, for mechanical evaluation won't influence the result much [12]. Regarding cyclic loading, spacers with titanium endoskeleton can even bear up a maximum hip resultant force of 4900 N when loaded with 500,000 load cycles. On the assumption that one million load cycles is the average yearly load history for a healthy person and that the spacer remains in situ for no longer than six month, 0.5 million cycles is the upper limit the spacer will ever be charged with [22, 23].

Clinical trial has shown that for antibiotic impregnated bone cements the major elution of antibiotics is just within the outer 2-3 mm, thus the endoskeleton won't influence the treatment adversely [11]. Moreover, as the existing endoskeleton carries the main load, the porosity of the cement coating may be increased which increases the antibiotic elution as well [15]. Anagnostakos et al. [24] showed a considerably increase in elution of commercially added gentamicin for spacers containing a metallic endoskeleton, whereas the elution of linezolid was marginally reduced. Antibiotic release behavior is mainly influenced by relative loading amount, porosity, surface area and surface roughness of the bone cement [25-28].

Beyond the here presented results, the developed FE-model can be further used for sensitive analysis. Hence, altering circumstances can initially be simulated on computer before starting expensive test series.

As the treatment of hip infections is usually necessary on elderly people where the bone density may be reduced, further biomechanical studies to investigate the dynamic properties of hip spacers implanted into cadaver femurs of elderly persons (age > 60 years) have started.

Intraoperatively formed spacers by means of a moulding form gives the possibility of customizing the antibiotic contained in the cement and insert an adapted endoskeleton. Present clinical experience and mechanical studies showed that spacers with an endoskeleton are well adapted to eradicate hip-infection and withstand normal loading during walking. Thus full-weight bearing is possible with this system, but restriction may be due to the condition of the femur.

19. Viceconti M, Casali M, Massari B, Cristofolini L, Bassini S, Toni A. The 'Standardized Femur Program' proposal for a reference geometry to be used for the creation of finite element models of the femur. J Biomech. 1996;29:1241