Top
Prophylaxy of recurrence of...
Therapy of...
References

Update on the treatment of ocular toxoplasmosis

This is an open access article distributed under the terms of the Creative Commons Attribution (CC BY-NC) License. See http://ivyspring.com/terms for full terms and conditions.
Citation:
Guex-Crosier Y. Update on the treatment of ocular toxoplasmosis. Int J Med Sci 2009; 6(3):140-142. doi:10.7150/ijms.6.140. Available from https://www.medsci.org/v06p0140.htm

Ocular toxoplasmosis is the most frequent cause of posterior uveitis. [1] The parasite has an intracellular cycle. During the primary infection, the subject is usually asymptomatic and can present flu-like symptoms. A dissemination of the parasites occurs and the tissular cysts will persist during the all life of the host. An ocular reactivation of the disease can occur when the cysts are present within the retina (Figure 1). The patients present a photophobia and floaters are seen. The slit-lamp examination reveals the presence of a granulomatous inflammation, a mild to moderate anterior chamber inflammation. Fundoscopy reveals the presence of a yellow focus of retinochoroiditis. Recent epidemiological data have shown that most cases of ocular toxoplasmosis result from reactivation of ocular toxoplasmosis and not from primary infection. Disease evolution depends on many factors: the immune response of the host, the virulence of the parasite and environmental factors and ocular toxoplasmosis can heals spontaneously after two to three months even in the absence of therapy.

A review of ophthalmic literature shows that no standard therapy could be proven by large multicentric clinical trials. [2] A survey of the opinion of ophthalmic specialists in uveitis was performed recently by Gary Holland. [3] The reasons that were commonly accepted to introduce a therapy were the following: a) the presence of a lesion within the vascular arcades of the posterior pole (zone 1) b) the presence of a lesion in the proximity of the optic nerve or the macula c) or a severe inflammatory reaction within the eyes. The zone 1 area was defined as a lesion that was in a sight-threatning area and corresponding to an area extending 3000 μm (2 disk diameters) from the fovea (approximately that area enclosed by the major temporal vascular arcades or 1500 μm from the margins of the optic disk.

The prospective study performed by Perkins in 1956 could not demonstrate the efficacy of daraprim in the therapy of ocular toxoplasmosis. But the outcome was measured 4 weeks after initiation of therapy. Dihydrofolate reductase inhibitors (DHFR) have shown their efficacy in vivo in the treatment of toxoplamosis. To increase the efficacy of therapy a combination of sulfadiazine and pyrimethamine was proposed since synergistic effect of these two drugs could be demonstrated in vitro. Pyrimethamine interferes with the conversion of folic acid to folinic acid through dihydropteroate synthase (DHPS) whereas sulfonamide interferes with the formation of folic acid from para-amino benzoic acid. Human beings unlike T. gondii can utilize exogenous folinic acid for their cells.

Classical therapy of ocular toxoplasmosis consists in a association of 2 to 4.0 g of sulfadiazine loading dose given over 24 hours, followed by 1g given 4 times daily associated with 75mg to 100mg pyrimethamine loading dose initially followed by 25 to 50 mg daily. Systemic steroids 1mg/kg is associated in the presence of severe ocular inflammation or in the presence of a zone 1 infection. A prospective randomised trial of trimethoprim/sulfamethoxazole versus pyrimethamine and sulfadiazine described a 61% reduction of lesions size was observed in the classic treatment group versus 59% in the TMP/S group. Reaction to sulfadiazine therapy is observed in overall 5% of patients. The main side effects are crystalluria, disorders of hematopoietic system hypersensitivity reaction nausea and vomiting and depression. The sulfadiazine cristalluria occurs in 1-4% of patients. The predisposing factors are a poor fluid intake, fever, diarrhoea, hypoalbuminuria and acidification of the urine. Cofactors in AIDS patients are concomitant use of acyclovir, triamterene or primidone. The leukopenia or thrombocytemia occur in the presence of interactions with the metabolism of folic acid. Folinic acid therapy is given three times a week to avoid leukopenia. Discontinuation of the therapy is recommended if the leukocytes are below 4 000 cells or if thrombocytes are below 100 000 cells. Maculo-papular rush appears in the presence of an allergy to sulfadiazine.

Long term intermittent Trimethoprim /Sulfamethoxazole treatments were used to prevent recurrences of toxoplasmic retinochoroiditis. Treatment was given every three days with a dosage of 60mg trimethoprim and 160mg Sulfamethoxazole. Recurrences were observed in only 6.6% versus 23.6% in the placebo group. However the results were not tested after 20 months of therapy and long term side effects are not known.

Toxoplasmosis-associated neovascular lesions are a rare complication of toxoplasmic retinochoroiditis. Photodynamic therapy with Visudyne was shown to block evolution in two out of three patients affected by neovascularization. Ranibizumab was shown to be a good alternative of therapy in three patients. Genotype studies and in vitro growth rates and resistance.

Genotypic strains of toxoplasma gondii and resistance to medication were recently suspected. Despite the fact that all clonage lineages can infect human beings, type II strains are predominant in European and North American population. Type III and recombinant I/III strains are predominant are predominant in South America. Various virulence has been demonstrated: Type I are highly virulent, type III strains are intermediate and type I/II are non virulent. Most of pharmacological studies were performed with RH strains (type I) which was used for its high capacity to grow in culture. A recent paper of Pascale Meneceur et al has shown that no significant difference in response to type I, II or III and one atypical strain was observed in the IC50 of the different strains towards pyrimethamine, sulfadiazine or atovaquone therapy. A correlation was observed between IC50 of pyrimethamine and strain growth rate.

In conclusion, larges randomised clinical studies will be necessary to prove the advantage of one drug toward the other. These studies should be completed by strains analyses and comparison of potential resistance toward the antitoxoplasmic drugs. 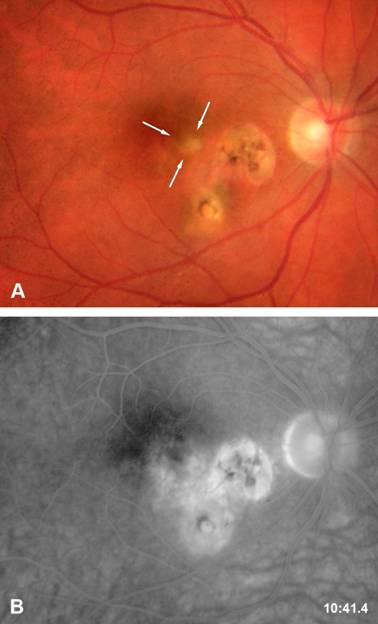