Toxocara canis/cati are parasitic nematodes that resides in the small intestine of dogs, cats and wild carnivores. They are found worldwide. Female worms are approximately 10 cm long and produce hundreds of embrionated eggs per day. Following several weeks in the environment, the embryo matures to the infective larval stage within the egg. It can remain viable for very long periods of time. The prevalence of Toxocara eggs in the ground is related to the number of dogs in that area and climatic factors of the country.

Human infection is due to accidental ingestion of infective eggs and tissue invasion of second stage Toxocara cati or canis larvae. Transmission is by contaminated food o by geophagia. Children up to 10 years are more prone to be infected for both their common geophagia.

Eighty per cent of pets are infested, and the incidence may vary in different countries (London 33%, Columbus - Ohio 98%, Brisbane - Australia 100%).

Human infection may be asymptomatic, it may simulate a viral infection or determine visceral larva migrans syndrome. The average age of onset is between 1 and 5 years and it has no correlation with concomitant ocular involvement. In only 2% of the cases of ocular toxocariasis it is possible to find a history positive for visceral larva migrans syndrome.

The incidence of ocular toxocariasis is undetermined and it may vary according to different Authors and in different countries. It is more frequent in children and it constitutes 1-2% of uveitis in children. Toxocara should be considered as a possible causative agent of posterior and diffuse uveitis and always in the differential diagnosis of retinoblastoma. The average age at diagnosis of ocular toxocariasis is 7.5 years (ranging from 2 to 31 years) and 80% of the patients are younger than 16 years old. [1] We can find three different manifestation of ocular involvement: chronic endophthalmitis, posterior granuloma and peripheral granuloma which clinical findings are reported in table 1.

The major causes of visual acuity loss are: - severe vitreitis (52.6% of the cases), - cystoid macular edema (47,4%) and - tractional retinal detachment (36.8%) (Figure 1). [2] The real factors that may influence the onset of a determined clinical form are unknown. It is possible that the lesions are due to a toxic or immunoallergic reaction towards larval antigens, mainly associated with larval death. The disruption occurring after larval death may determine an inflammatory reaction and granuloma formation. The associated vitreitis is usually considered a reaction towards highly immunogenetic antigens. The severity of the disease might be related to the number of the larvae present in the eye and by the immune response of the host. 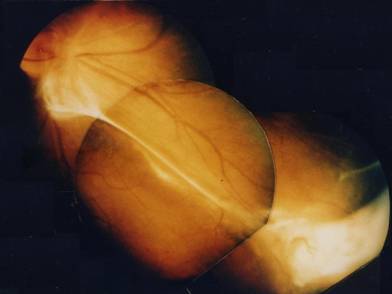 The best therapy is to prevent infection, eliminating or reducing the contact between children and contaminated environments, periodic treatment of pets, in particular lactating females.

Once the infection is established, therapy should be guided according to: - visual acuity, - severity of inflammation, - irreversible ocular damage. Generally peripheral granuloma are silent or show minimal inflammatory reaction and do not require therapy. An antielmintic therapy with either tiabendazole or diethylcarbamazepine is not worldwide accepted because of the possibility that larvae death may increase the inflammatory reaction. A steroid umbrella, either administered sistemically or by periocular injections is always advisable to reduce the inflammatory reaction followed by the death of the larva or given alone to control vitreitis and the formation of vitreoretinal tractional membranes. Vitreoretinal surgery is useful and indicated to remove vitreous opacities and epiretinal membranes, to prevent and to treat retinal detachment. Nevertheless in 24-42% of the cases a relapse retinal detachment may occur because of a persistent post-surgical inflammatory reaction. Laser photocoagulation has a limited role and may be used to kill live and mobile larva in the retinal space when visible (under “steroid umbrella”) and to treat choroidal neovascular membrane.