Ocular involvement in Lyme borreliosis, even though possible in every stage of the disease, is most frequently seen in the late phases (2nd and 3rd). In a German series of children affected by Lyme arthritis, 4% also had ocular inflammation consisting of keratitis or uveitis. [1] In a Finnish cohort of twenty patients with ocular borreliosis, 10 had uveitis, 5 subjects showed ocular adnexa inflammation, 4 had neuro-ophthalmological alterations and one patient developed branch central retinal vein occlusion. Contact with a tick was clearly reported in only 13/20 cases. [2] There are various ocular symptoms of Lyme disease including: pain, visual impairment, photophobia, myodesospia, diplopia and lack of accommodation. [3]

To observe ocular signs or symptoms it is not necessary that the site of inoculation of the infection is close to the eyes (as in Figure 1). It is possible to define the following ocular findings, from the anterior to the posterior segment of the eye:

Conjunctivitis: often self-limited; when it appears in the 1st stage of the disease it is associated with an influenza-like syndrome in 7-11% of the patients. It is follicular and uni- or bilateral and in the late phases of disease it may be accompanied by sever eyelid edema in 3% of subjects.

Keratitis: typical of the 2nd and 3rd stage of the disease; it may persist even after appropriate systemic antibiotic treatment, suggesting an immunological origin of corneal opacity. It can be disseminated and potentially bilateral, but the most characteristic patterns are “interstitial” or “ulcerative” with peripheral neovascolarisation.

Episcleritis/Scleritis: very rare, almost always related to the late phase of the disease.

Uveitis: the anterior form is infrequently reported in Lyme disease and is possibly associated with papillitis. The case observed in our Institute had exactly these features. It consisted in a serologically-confirmed unilateral papillitis (Figure 2), combined with keratic granulomatous precipitates and iris-lens sinechyae. Ocular involvement appeared during the 2nd stage of the disease, sixty days after the removal of a tick from the forearm. Treatment with amoxicillin for three weeks combined with oral prednisone at decreasing doses was successful in achieving complete visual recovery.

The intermediate form is the most common form of uveitis, often associated with iridocyclitis (parsplanitis). In three cases Borrellia burgdorfori s.l. was isolated from the vitreous by culture or polymerase chain reaction. Only a few reports concern panuveitis; two cases, however, resulted in irreversible visual loss. Signs of posterior uveitis mostly included chorio-retinal involvement.

Retinal infection: macular oedema and vasculitis are the most frequent findings, occasionally complicated by vitreoretinal proliferation and have been described either during the erythema migrans phase or in neuroborreliosis. Venular occlusions and chorio-retinal inflammatory foci are less common manifestations. A recent report has shown cotton wool spots as another possible sign of Lyme retinitis. [4]Neuro-ophthalmological alterations: these represent early evidence of neuroborreliosis. Diplopia and visual impairment, with or without meningitis, are the suggestive signs. In case of optic neuritis the concomitant presence of cranial nerve palsies is expected (mostly VI or VII).

Uncertain reports of orbital myosistis and Jarisch-Herxheimer reaction have also been proposed as a consequence of borreliosis.

In conclusion, ocular involvement in Lyme borreliosis is symptomatic and a routine ophthalmologic evaluation is not recommended in adult patients (younger patients, on the other hand, should be screened due to their poor capacity to complain of ocular disturbances). In order to formulate a rational suspicion of Lyme disease as the cause of ocular inflammation, features must include occurrence in an endemic zone; and/or the report of contact with a tick or of previous erythema migrans; positive serology with presence of IgM in the early stage or high titres of IgG in the later phases. A clear diagnosis, however, remains very difficult. The long-term follow-up of four cases of optic neuritis labelled as Lyme disease because of the positive serology for Borrelia revealed that three patients actually developed demyelinating syndromes. [5] 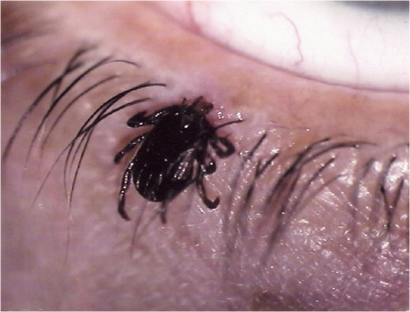 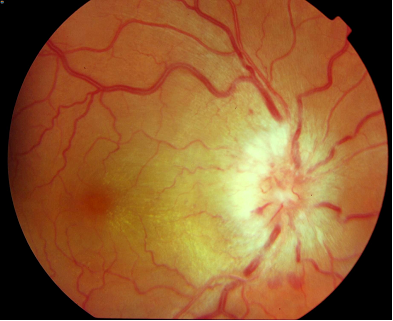 3. Boyé T. What kind of clinical, epidemiological, and biological data is essential for the diagnosis of lyme borreliosis? Dermatological and ophthalmological courses of Lyme borreliosis. Médecine et Maladies Infectieuses. 2007;37:S175-188