Background: Implantable loop recorders (ILR) have been found to be useful in the diagnosis and management of syncope of unclear etiology. The clinical symptoms of abnormalities seen during ILR monitoring have not been adequately studied.

Aim: The aim of this retrospective study was to determine the clinical symptoms which were the best predictors of asystolic or bradycardic responses during ILR monitoring.

Methods: Patients with either asystole or bradycardia recorded during ILR monitoring were analyzed from our database. The clinical characteristics of these patients were compared to the patients with ILR's who did not have recorded bradycardic episodes. The episodes were characterized as being convulsive or nonconvulsive, brief (<5 minutes) or prolonged (> 5 minutes), and having had a prodrome or no prodrome.

Conclusion: Convulsive syncope, prolonged loss of consciousness during syncopal episode, and absence of prodrome or aura are clinical predictors of asystole or bradycardia on ILR monitoring.

Ambulatory cardiac monitoring with Holter or external loop recorders is frequently employed in the evaluation of patients with recurrent syncope. However, several non-randomized studies demonstrate a relatively low (<40%) diagnostic yield from this approach [1-5]. Implantable loop recorders (ILR's), by contrast, allow for a more prolonged period of monitoring as well as automatic activation during events, resulting in a higher diagnostic yield than traditional monitoring techniques [6-12]. During ILR monitoring of patients with recurrent syncope, bradycardic events are encountered more frequently than are tachycardiac ones [13-15]. The clinical symptoms most predictive of significant bradycardic events (such as prolonged sinus pauses or complete heart block) recorded during ILR monitoring have not been well reported. The aim of the present study was to identify the clinical characteristics and symptoms obtained from patient histories that best correlate with significant bradycardic events recorded during ILR monitoring.

The study was a retrospective analysis which was approved by the University of Toledo Institutional Review Board. A comprehensive review of patient charts was performed to identify patients of unexplained syncope who had received ILR and had asystolic (>10 second pause) or bradycardic (< 20 beats per minute) response corresponding to syncopal event during ILR monitoring.

We queried our data base of implanted loop recorders. We identified 150 patients who received ILR over a period of 8 years for evaluation of unexplained nature of their syncope. Out of these 150 patients only 14 had either a bradycardic (n=11) or a tachycardiac response (n=3) recorded on ILR during episodes of syncope. Patients were included in the study if they had either syncope or symptoms during monitoring which resembled the index syncope episode that lead to evaluation. Patients included in the study had undergone an extensive evaluation including head up tilt test, cardiac electrophysiology study and 24 hour holter monitor and 1 month event recorder prior to implantation of ILR. Another 8 patients who had received loop implants during the same time frame and had no arrhythmia recorded during an episode of the syncope were also include to make groups comparable. These patients were followed for a period of 9±3 months after rhythm directed therapy for recurrence of any syncope.

All statistical analyses were done using SPSS. The continuous data was presented as mean ±SD and categorical data as percentages. T-test for comparison of means and chi-square test for categorical data was used. Significance was achieved with P value < 0.05.

Total of 22 patients of refractory syncope were included in this study. These patients had suffered from recurrent episodes of syncope (> 2 in 6 months). All of these patients had a negative work-up including head up tilt test (HUTT), 24 hour holter, 30 day event monitor and cardiac electrophysiology studies. Some of these patients had undergone stress and coronary angiography as well as electroencephalography and CT scan. All the evaluations turned out to be inconclusive. In view of negative initial inconclusive work-up patients received implantable loop recorders. The average duration of monitoring with an ILR was 6 months.

Eleven patients in group 2 (2 males and 9 females; age 46±23) had either tachycardia (n=3) or a sinus rhythm (n-8) recorded during an episode syncope.

One patent with tachycardia in Group 2 had Ventricular Tachycardia (HR > 140) and episodes of atrial fibrillation (HR 180). Two patients had atrioventricular re-entrant tachycardia with HR (200).

These episodes of arrhythmias either tachycardia or bradycardia were associated either with syncope during ILR monitoring.

Group 1= Patients with asystolic or bradycardic response on ILR monitoring.

Group 2= Patients without asystolic or bradycardic response on ILR monitoring.

Age, gender, and race were similar in the two groups. In this study, fourteen patients had positive testing on ILR monitoring. In group 1, eight patients had bradycardia (HR < 20) for > 10 seconds and three patients had asystole >10 seconds. One of the patients had a 44-second sinus pause on ILR monitoring (Fig 2). Dual chamber pacemaker was placed in all eleven patients in group 1 in view of either asystole or complete AV block recorded on ILR during a syncopal episode. Two patients in group 2 who were noted to have supraventricular tachycardia underwent radiofrequency ablation therapy. The patient with ventricular tachycardia and atrial fibrillation received an implantable cardioverter defibrillator as well as medical management for paroxysmal atrial fibrillation. Following rhythm directed therapy, none of these patients had any further episodes of syncope over 6±3 months. 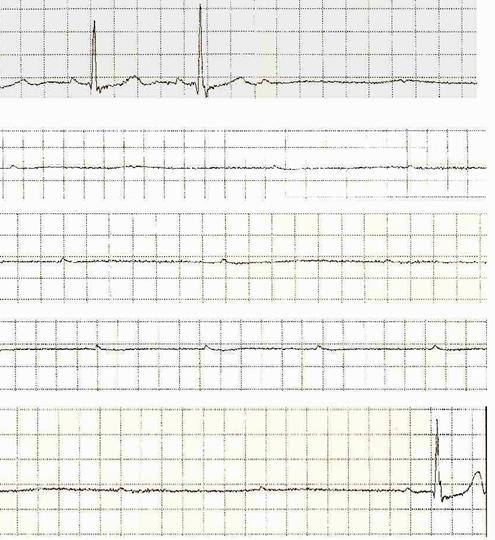 Unexplained syncope can pose a unique diagnostic challenge for physicians especially when the initial workup such as HUTT, electrophysiology studies, 24 hour holter monitor or 30 day event recorder is inconclusive. Implantable loop recorders have been shown to improve diagnosis and, thus facilitate rhythm directed therapy in this subgroup of patients [3-16]. In our study of 22 patients, 14 had an arrhythmic etiology. Eleven patients had bradyarrhythmia on ILR monitoring.

Our study is unique as the clinical symptoms of the syncope in patients with bradyarrhythmic responses (the most common arrhythmia that has been reported during prolonged monitoring with ILR) have not been studied to date. It is interesting that abrupt onset (lack of prodrome), convulsive activity, and prolonged episodes of loss of consciousness were significantly associated with bradycardic responses during ILR monitoring. Interestingly, some of the patients in our study were labeled as having psychogenic syncope for years before the ILR monitoring revealed the diagnosis. The result of the recurrent and unpredictable nature of these syncopal episodes can result in a marked reduction in the quality of life in many of these patients [17].

Syncope can sometimes be confused with seizures. Some studies have reported that 30-42% of patients who were initially diagnosed with epilepsy had syncope with convulsive activity due cardiovascular etiology [20, 21, 22]. The pathophysiology of syncope provoked convulsive activity is complex. Asystole and sinus pauses in our patients were long enough to result in severe hypotension and cerebral hypoxia, which in turn could have lead to convulsive activity. Engel et al [23] reported seizure-like activity following periods of cerebral hypoxia. It has also been reported that in episodes of syncope associated with convulsive activity, the duration of loss of consciousness tends to be longer, as is the time to full recovery. In our study, these episodes lasted more than 5 min from onset to full return of consciousness (including postictal confusion period). In addition, all our patients who had a bradycardic/asystolic response on ILR monitoring had abrupt onset of syncope with no prodrome or aura, which predisposed them to suffer trauma from an episode. Sud et al [24] in their recent report of predicting cause of syncope from clinical histories found that syncope occurring without aura or prodrome is associated with spontaneous arrhythmic etiology predominantly bradycardia.

Given a small number of patients in our study population and retrospective nature of the study an adequately powered prospective study is needed to validate these results, nevertheless the results of our study are consistent with those of other studies [13-15,23,24].

In our study, ILR monitoring by guiding rhythm directed therapy in all patients who tested positive helped prevent further syncope. None of the patients has yet had recurrence of their syncope following definitive treatment.

This study was retrospective in nature and followed a small number of patients. The information about the clinical symptoms was obtained from patient charts and physician letters. There was no questionnaire used to assess the symptoms. Another limitation of the study was a recall bias on the part of family members or friends witnessing these episodes. The study included only patients with unexplained syncope and thus the results can not be generalized.

In the group of patients with recurrent unexplained syncope, severe bradycardia/asystole was the most common positive finding recorded during ILR monitoring. The clinical symptoms that were found to have the consistent association with severe bradycardia and asystole include lack of prodrome, convulsive activity and prolonged loss of consciousness.

12. Farwell DJ, Freemantle N, Sulke AN. Use of implantable loop recorders in the diagnosis and management of Syncope. European Heart Journal. 2004;25:1257-1263