Neuroinflammation is a process in which the brain responds to infections, diseases and injuries [1, 2]. Neuroinflammation involve two types of immune cells: lymphocytes, monocytes and macrophages of the hematopoietic system, and microglial cells of the CNS [3, 4]. Neuroinflammation disrupts the blood-brain barrier (BBB), allowing cells from the hematopoietic system to leave the blood stream and come in contact to the injury site [5]. The immune cells respond to injuries by eliminating debris and, synthesizing and releasing a host of powerful regulatory substances, like the complements, cytokines, chemokines, glutamate, interleukins, nitric oxide, reactive oxygen species and transforming growth factors [6-10]. The substances have both beneficial and harmful effects on the cellular environment, creating further damages [11] (fig. 1). Mature astrocytes are also activated following injury to the CNS [12, 13]. Astrocytic activation is believed to be necessary for containing the immune response, repairing the BBB and attenuating further neuronal death [5, 14].

Contrary to a long-held dogma, neurogenesis occurs in the brain and NSCs reside in the CNS of adult mammals, in various species including human [15, 16]. NSCs are the self-renewing multipotent cells that generate the main phenotypes of the nervous system. Neurogenesis is modulated in the brain of patients and in animal models of neurological diseases and disorders, like Alzheimer's disease (AD), epilepsy and Huntington's disease (HD) [17]. This suggests that the adult brain may be amenable to repair and that adult neurogenesis may contribute to the functioning, and phyio- and pathology of the CNS, particularly to the etiology of neurological diseases and disorders.

Neuroinflammation in neurological diseases and injuries

Inflammation is a process in which the body's white blood cells and chemicals protect us, from infections, foreign substances and injuries. In the CNS, neuroinflammation occurs following traumatic brain injuries, spinal cord injuries and cerebral strokes. It involves immune cells from the hematopoietic and nervous system [1, 2, 6, 18]. It is now well documented that neuroinflammation is actively involved in neurological diseases and disorders, like AD, amyotrophic lateral sclerosis, depression, epilepsy, HD, multiple sclerosis and Parkinson's disease (PD) [19-22]. Particularly, in AD, there is a correlation between local inflammation, and presence of amyloid plaques and neurofibrillary tangles [23].

Adult neurogenesis and neuroinflammation. Neuroinflammation has been proposed as a causative factor for neurological diseases and disorders. It has both beneficial and harmful effects on the cellular environment. Neuroinflammation disrupts the BBB. Adult neurogenesis in modulated in a broad range of neurological diseases and disorders; it is decreased during inflammation. Adult neurogenesis may be involved in regenerative attempts and the plasticity of the nervous system. Adult-derived neural progenitor and stem cells grafted in the brain promote neuroprotection, by an immunomodulatory mechanism. Grafted neural progenitor and stem cells interact with the host immune system to promote functional recovery, an interaction that may provide clinical benefit for NSC-based therapy. 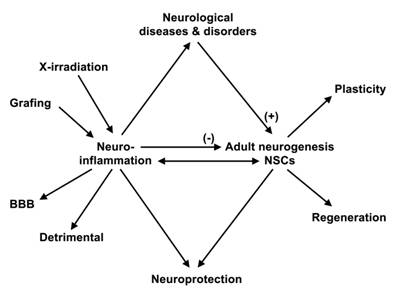 In the adult mammalian brain, including in humans, neurogenesis occurs primarily in two regions, the dentate gyrus (DG) of the hippocampus and subventricular zone (SVZ) [30, 31]. Neurogenesis involves a relatively small number of cells, particularly in the DG, and is modulated by environmental stimuli, trophic factors/cytokines, drug treatments, and in various physio- and pathological conditions, like neurological diseases and disorders [32]. Newborn neuronal cells, in the adult brain, establish functional connections, survive for extended period of time, at least 2 years in human, and reproduce processes similar to development, to integrate the mature network [30, 33, 34]. Adult neural progenitor and stem cells have been isolated and characterized in vitro, from various species [16], including from human biopsies and post-mortem tissues [35]. It is hypothesized that newborn neuronal cells in the adult brain originate from residual stem cells. The existence of stem cells in the adult brain suggests that it has the potential for self-repair and that newborn neuronal cells may contribute to the functioning, and physio- and pathology of the CNS [36]. However, adult NSCs remain elusive cells and to be unequivocally identified and characterized in vitro and in vivo [37, 38].

Adult neurogenesis is modulated in the brains of patients and in animal models of neurological diseases and disorders, like AD, depression, epilepsy, Huntington's and Parkinson's diseases [17]. Neurogenesis is increased in the hippocampus of brains of patients with AD, as revealed after autopsies by an increase in the expression of markers for immature neuronal cells, like doublecortin and polysialylated nerve cell adhesion molecule, in hippocampal regions [44]. In animal models of AD, neurogenesis is increased in the DG of transgenic mice expressing the Swedish and Indiana amyloid protein precursor (APP) mutations, a mutant form of human APP, [45] and decreased in the DG and SVZ of knock-out mice for presenilin 1 and APP [46, 47]. This shows that adult neurogenesis is enhanced in AD brains. The discrepancies observed on adult neurogenesis in brain autopsies of patients with AD and animal models of AD may originate from the limitations of animal models, particularly transgenic mice, as representative models of complex diseases, particularly AD [48] and to study adult phenotypes, like adult neurogenesis. Result from autopsies reveals that neurogenesis is not altered in the brains of depressive patients [49]. Neurogenesis is enhanced in the DG and SVZ of animal models of epilepsy, like after pilocarpine treatment [50]. After pilocarpine treatment, ectopic granule-like cells in the hilus are labeled for bromodeoxyuridine (BrdU). BrdU is a thymidine analog that incorporates DNA of dividing cells during the S-phase of the cell cycle and is used for birthdating and monitoring cell proliferation [51]. MF-like processes immunostained for TOAD-64, a marker for newly generated neuronal cells, are also detected in the granule cell layer of the stratum oriens of CA3 and the inner molecular layer of the DG, in rodents [50]. Low-dose, whole-brain, X-ray irradiation in adult rats, after pilocarpine treatment, inhibits neurogenesis, but does not prevent seizure-induced ectopic granule-like cells and MF sprouting [52]. Hence, neurogenesis is enhanced in the DG and SVZ in animal models of epilepsy and seizure-induced ectopic granule-like cells and MF sprouting arises not only from newborn neuronal cells, but also from mature dentate granule cells. Immunohistochemistry and confocal microscopy analysis of autopsies for markers of the cell cycle and neuronal differentiation, like proliferating cell nuclear antigen and β-tubulin, show that cell proliferation and neurogenesis are increased in the SVZ of brains of patients with HD [41]. In adult R6/1 transgenic mouse model of HD, neurogenesis decreases in the DG [53]. After quinolinic acid striatal lesioning of adult brain, neurogenesis is increased in the SVZ [54], as observed in brains of HD patients [41]. These data provide evidences that adult neurogenesis is increased in the SVZ of brains with HD. Data from R6/1 transgenic mouse model of HD are difficult to interpret in the context of adult neurogenesis in HD, as mutated forms of huntingtin affect brain development [55]. This could underlie the decrease of neurogenesis reported in adult transgenic mice R6/1. In PD, one study reports that the rate of neurogenesis, measured by BrdU labeling, is stimulated in the substantia nigra (SN), following lesion induced by a systemic dose of MPTP (1-methyl-4-phenyl-1,2,3,6-tetrahydropyridine) [56]. Another study reports no evidence of new dopaminergic neurons in the SN of 6-hydroxydopamine-lesioned hemi-Parkinsonian rodents [57]. Hence, neurogenesis in the SN is the source of debates and controversies, and remains to be further evaluated.

In all, adult neurogenesis in modulated in a broad range of neurological diseases and disorders (fig. 1). The contribution and significance of this modulation to the etiology and pathogenesis of neurological diseases and disorders remain mostly unknown. In epilepsy, low-dose, whole-brain, X-ray irradiation in adult rats, after pilocarpine treatment, inhibits neurogenesis, but does not prevent the induction of recurrent seizures [52]. These data provide a strong argument against a critical role of adult neurogenesis in epileptogenesis. However, although increased hippocampal neurogenesis may not be critical to epileptogenesis, it could be a contributing factor to limbic seizures when present. In depression, chronic administration of antidepressants, like the selective serotonin reuptake inhibitors fluoxetine, increases neurogenesis in the DG, but not the SVZ in adult rats, suggesting that adult neurogenesis is involved in the activity of antidepressants [58, 59]. X-irradiation of the hippocampal region, but not other brain regions, like the SVZ or the cerebellar region, inhibits neurogenesis and prevents the behavioral effect of the antidepressants, like fluoxetine, in adult mice [60]. Hence, it is proposed that adult neurogenesis mediate the activities of antidepressants, particularly selective serotonin reuptake inhibitors. In HD, in brains of HD patients and after quinolinic acid striatal lesioning of adult brain the enhanced neurogenesis in the SVZ leads to the migration of neuroblasts and formation of new neuronal cells in damaged areas of the striatum. This suggests that neurogenesis may be involved in regenerative attempts in HD brains [41, 54] (fig. 1).

There are however debates and controversies over the modulation of adult neurogenesis in neurological diseases and disorders, particularly for studies involving BrdU labeling for studying neurogenesis. BrdU is a thymidine analog that incorporates DNA of dividing cells during the S-phase of the cell cycle and is used for birthdating and monitoring cell proliferation [51]. There are limitations and pitfalls over the use of BrdU for studying neurogenesis. BrdU is toxic and mutagenic substances. It triggers cell death, the formation of teratomes, alters DNA stability, lengthens the cell cycle, and has mitogenic, transcriptional and translational effects on cells that incorporate it. BrdU is not a marker for cell proliferation, but a marker for DNA synthesis [61-63]. High level, 4 to 10%, of tetraploid nerve cells have been reported in regions in which degeneration occurs in AD, like the hippocampus [64]. It is proposed that cell cycle re-entry and DNA duplication, without cell proliferation, precede neuronal death in degenerating regions of the CNS [65]. Some of the data observed by mean of immunohistochemistry for cell cycle proteins and BrdU labeling in the brains of AD patients and in animal models of the disease, may therefore not represent adult neurogenesis, but rather labeled nerve cells that may have entered the cell cycle and underwent DNA replication, but did not complete the cell cycle [62]. In addition, many physio- and pathological processes, like exercise, neurological diseases and injuries, like AD, PD and cerebral strokes and drugs treatments affect the permeability of the BBB and cerebral flow [66-68]. Some of the data observed by mean of BrdU labeling in animal models of neurological diseases and after drug treatments may reflect bio-availability of BrdU in the brain, rather than neurogenesis.

Neuroinflammation is involved in the pathogenesis of neurological diseases and disorders, but its contribution and involvement to these pathological processes remain to be elucidated. It may be involved in the modulation of neurogenesis in neurological diseases and disorders, but the contribution and significance of this modulation remain to be understood. Neuroinflammation has tremendous implications for cellular therapy. On the one hand, it may limit the therapeutic potential of adult NSCs in vivo and ex vivo. On the other hand, it may interact with the neurogenic niches to promote the regenerative potential in vivo, and the integration of the grated neural progenitor and stem cells ex vivo. Hence, neuroinflammation may have both beneficial and detrimental effects on the potential of adult NSCs, to promote regeneration and repair in vivo and ex vivo. Therapeutic strategies for promoting the potential of adult NSCs in vivo and ex vivo may involve pro- and anti-inflammatory treatments. Future studies will aim at unraveling the molecular mechanisms governing the interaction between neural progenitor and stem cells and the immune system, and it implications for cellular therapy.

The author has declared that no conflict of interest exists.

5. Lossinsky AS, Shivers RR. Structural pathways for macromolecular and cellular transport across the blood-brain barrier during inflammatory conditions. Histol Histopathol. 2004;19:535-64

51. Miller MW, Nowakowski RS. Use of bromodeoxyuridine-immunohistochemistry to examine the proliferation, migration and time of origin of cells in the central nervous system. Brain Res. 1988;457:44-52