TPO, but not soluble-IL-6 receptor, levels increase after anagrelide treatment of thrombocythemia in chronic myeloproliferative disorders

Anagrelide is often used in the treatment of thrombocythemia in myeloproliferative disease (MPD), but information concerning effects of treatment on cytokines involved in regulation of blood platelet levels is limited. Here, we investigated serum levels of thrombopoietin (TPO) and soluble IL-6 receptor (sIL-6R) in relation to response to treatment with and plasma concentrations of anagrelide. Samples from 45 patients with thrombocythemia due to MPD (ET=31, PV=14), being treated with anagrelide for 6 months, were analyzed for TPO, sIL-6R and anagrelide levels. The mean baseline platelet count was 983x109/L. A reduction of platelets to <600 in asymptomatic or <400 x 109/L in symptomatic patients was defined as a complete remission (CR), a reduction with >50% of baseline as partial remission, and <50% reduction as failure. At 6 months, 35 patients were in CR, 1 had a partial remission and 9 were treatment failures. For all patients, there was an increase in TPO of 44% from baseline; this change was more pronounced for patients with partial remission and failure. sIL-6R levels did not change significantly. There was no correlation between levels of anagrelide and cytokine levels at 6 months, and changes of cytokine levels did not relate to changes of platelet counts. Thus, a pronounced increase of TPO levels after 6 months of anagrelide treatment indicated that this treatment affected a major regulatory mechanism for megakaryocyte and platelet formation in MPD.

One of the clinical challenges in chronic myeloproliferative disorders (MPD) is thrombocythemia, always present in essential thrombocythemia (ET) and often in polycythemia vera (PV), myelofibrosis (MF) and chronic myelogenous leukemia. The risks associated with thrombocythemia are thromboembolic events and bleeding, risks that may be reduced with appropriate therapy.

Anagrelide hydroxide is a platelet reducing compound, often used as an alternative to hydroxyurea, interferon-α and alkylating agents for the treatment of thrombocytosis in MPD [1-4]. Anagrelide exerts its effect by reducing differentiation at a late, non-mitotic stage in megakaryocyte development [5-8]. This leads to reduced platelet production by inhibition of megakaryocyte colony development, thereby reducing megakaryocyte size and ploidy, and disrupting or preventing full megakaryocyte maturation. However, little is known of the interaction of anagrelide with cytokines regulating thrombocytopoiesis, particularly thrombopoietin (TPO), the major growth factor for regulation of blood platelet levels [9]. In a recent study a dose-response effect of anagrelide on CD41 numbers and TPO-specific pTyr activity was seen in vitro, indicating that anagrelide reduces the TPO-mediated intracellular signaling events [10].

Serum or plasma levels of TPO are often, but not always, raised in MPD [11-20; 21-25], with the highest levels being observed in MF [24, 26]. Likewise, TPO concentrations are often high in reactive thrombocytosis [13, 14, 18, 22]. A few reports have described higher TPO levels in treated compared to untreated MPD patients [15, 17, 12]. In some of these studies, an inverse relation between blood platelet counts and TPO was observed [16, 26] but just as often there was no correlation [13, 19]. A role for TPO for emergence of MF has also been suggested, based on results from studies with mice with engineered TPO overproduction [27-29]. Likewise, interleukin-6 (IL-6) levels might be raised in MPD [14].

Since it is poorly known if therapy for thrombocythemia affects TPO levels, we assessed the effects of 6 months of anagrelide treatment of thrombocytosis in MPD patients on serum levels of TPO and the sIL-6 receptor. The latter was chosen since some recent evidence has been presented indicating that high levels of this receptor might be found in MPD and might be lowered during anagrelide therapy [14, 30].

A full description of these results is given in [3]. There was no significant difference in dose administered to either the ET or PV patients (p=0.3). After 6 months of therapy, 45 patients were still taking anagrelide, 29 with ET and 16 with PV. 35 of these patients had a CR, 1 a PR and 9 were failures. Serum samples from these patients were analyzed for cytokine levels. Fifteen patients of the original 60 had stopped anagrelide due to side effects or insufficient effect at tolerable dose.

Platelet counts, serum TPO and sIL-6R concentrations prior to and after 6 months of anagrelide treatment. Mean and SD values.

Changes at 6 months in platelet counts, TPO and sIL-6R concentrations in all MPD patients (All), in those achieving complete response (CR) and those attaining partial response or failure of response (PR+F), in relation to values prior to start of anagrelide. 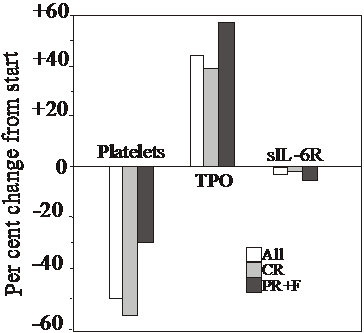 At 6 months the mean anagrelide concentration in plasma for the 45 MPD patients was 1.6±1.2 ng/mL. There was no significant difference in anagrelide concentrations between PV and ET patients. Likewise, there was no significant difference between those who achieved CR or those with PR+F (not shown). Reliable methods for the measurement of anagrelide metabolites were not available at the time of study.

Effects on TPO and sIL-6R levels

PV and ET patients did not differ (p>0.05) at baseline with regard to their TPO levels. Also at six months the increments were similar in the two diagnosis groups (Table 1).

Although the primary aim of this study was to assess changes of cytokines during anagrelide treatment, some comparisons can be made with previously published studies as to levels of TPO of MPD patients compared to healthy individuals. Based on the studies by others, who used the same assay system as we have done [11, 23, 24], it appears that the starting TPO values for our MPD patients (mean values ± 2SD being 0-250 pg/mL) were similar to those published for controls (combined mean values ± 2SD for the 3 studies: 0-221 pg/mL). The values at 6 months appeared, however, to be higher (92.5-302 pg/mL).

PV and ET patients did neither differ at baseline nor at 6 months with regard to the sIL-6R levels (Table 1). No significant changes were observed for this variable over the studied 6 months, neither for all patients, nor for those entering CR or PR+F (Figure 1).

We report here that serum levels of TPO, the major cytokine involved in the regulation of megakaryocyte and platelet growth and release, was raised at six months of anagrelide treatment; concomitantly there was a reduction of blood platelet counts. This rise in serum concentrations of TPO is a novel finding and may also be relevant for discussions about development of bone marrow fibrosis during treatment with anagrelide [4, 27-29, 31].

Previous investigations on TPO concentrations in chronic myeloproliferative disorders have shown that serum/plasma levels are slightly above or within the range of normal individuals [11-25]. Our results agree well with these previously published concentrations when the same assay, as we used here, has been employed. That is true for base-line values, whereas values after 6 months appear to be well over the reference range established by the others. Our findings might be of help to explain why TPO values were higher than normal in some studies and within the normal range in other; it might be a matter of effects related to previous treatments.

We cannot offer any mechanistic explanation for why there was a rise in serum TPO levels. One speculation relates to the model of action of TPO with its receptor on target cells. It is well established that serum levels of TPO are regulated by the binding of the ligand to the receptor and the endocytosis of the ligand-receptor complex [9]. Against that background, we speculate that less TPO was bound to platelets and more remained free when anagrelide caused a reduction in platelet concentrations. This hypothesis is supported by the recent findings of McCarty et al, who showed an effect of anagrelide on CD41 numbers and TPO-specific pTyr activity in vitro, indicating that anagrelide reduces the TPO-mediated intracellular signaling events [10]. They suggest reduced receptor binding as a possible mechanism. Furthermore, the rise in TPO seen here may be analogous to what has been described for the opposite, viz. the drop in TPO that occurs when immunologic thrombocytopenic purpura patients respond to therapy with raised platelet counts. However, this hypothesis is not supported fully by the lack of correlation between the changes for platelet counts and TPO concentrations. Thus, those who displayed the most pronounced platelet count reduction and achieving CR had the lowest increase of TPO concentrations, whereas the PR+F group showed the most pronounced rise of TPO. Future studies of TPO interactions with its receptor, not only on platelets but also on megakaryocytes, might yield a better understanding [9].

One may ask if the TPO rise observed here was specific for the anagrelide treatment or if it might also be observed during treatment with hydroxyurea, 32P, interferon-α or other platelet reducing agents. At this time this is not known; future longitudinal studies may give an answer. However, the lack of correlation between TPO, on the one hand, and blood platelet counts, on the other, is in accordance with some previous results [13,19]. This lack also suggests that interactions are rather complex or slow; thus, in samples obtained at a single time point it might not be feasible to demonstrate cause-effect relationships, even if such exist. Moreover, the lack of correlation between changes of levels of the here measured cytokines with levels of anagrelide is understandable, since the variation in maintenance dose was small (mean daily dose at 6 months 2.3±0.2 mg) and the number of patients is rather low. Moreover, recent data suggest that one metabolite, BCH 24426, retains the platelet lowering effect, whereas the other major metabolite, RL 603, does not [8, 32]. When reliable analyses of metabolites become available, such studies might shed some light on the drug-effect relations.

Soluble IL-6 receptor (IL-6R) was recently advocated as a protein susceptible to reductions during anagrelide treatment for MPD [30]. We can not corroborate those findings here, despite using the same assay as those investigators. At this time no clear explanation for the discrepancies of results can be offered.

60 patients with a diagnosis of myeloproliferative disease were treated with anagrelide (Agrylin®)[3]. 17 had polycythemia vera (PV), 42 essential thrombobocythemia (ET) and 1 had myelofibrosis (MF). The diagnosis was established according to the diagnostic criteria of Pearson et al for polycythemia vera [33] or Kutti & Wadenvik [34] for essential thrombocythemia. The platelet count had to be >600 x 109/L in symptomatic patients or >1 000 x 109/L in all other patients at repeated measurements. Symptoms were defined as previous thromboembolic episodes or ongoing microcirculatory symptoms

The mean age was 52.7, median 53.5 (27-75) years for the whole group. Further details on demographics, previous treatments etc are given in [3]. The study was approved of the Ethical committee of Uppsala University and informed consent was obtained from all patients.

Full details of the treatment protocol are given in [3]. Anagrelide was administered orally. The starting dose was 0.5 mg b.i.d. If there was no response the dose was increased by 0.5 mg per day per week. The mean maintenance dose was 2.3 mg/day.

Blood counts were performed in the routine of the hospital laboratories of clinical chemistry.

Serum TPO and soluble IL-6 receptor (sIL-6R) concentrations were measured with ELISA (Quantikine, R&D Systems, Minneapolis, MN), as recommended by the manufacturer and in duplicates. The lower limits of detection were for TPO 8 pg/mL and for sIL-6R 6.5 pg/mL. There is no difference between serum and plasma levels of these two cytokines, according to the information provided by the manufacturer.

Changes in concentration of cytokines were tested with T-test for dependent samples. Values are given as mean and SD values (or as indicated). Correlations between variables were assessed with Pearson correlation test.

This study was carried out with the support of an unrestricted research grant from Swedish Orphan AB and grants from The Swedish Medical Research Council 71X-5991 (to JP). We thank Inger Vedin, MSci, for the cytokine analyses, and Dr Terry Noctor, York Bioanalytical Solutions, UK, for the anagrelide concentration analyses.

2. Storen EC, Tefferi A. Long-term use of anagrelide in young patients with essential thrombocythemia. Blood. 2001;97:863-6

7. Tomer A. Effects of anagrelide on invivo megakaryocyte proliferation and maturation in essential thrombocythemia. Blood. 2002;99:1602-9