Background: As aromatase-deficient mice, which are deficient in estrogens, reportedly have reduced blood pressure, the aromatase gene (CYP19A1) is thought to be a susceptibility gene for essential hypertension (EH). The aim of the present study was to investigate the relationship between CYP19A1 and EH by examining single nucleotide polymorphisms (SNPs).

High blood pressure or hypertension affects about 25% of adults and is an important risk factor for death from stroke, myocardial infarction and congestive heart failure. The main cause of hypertension is a primary condition known as essential hypertension (EH). EH is thought to be a multifactorial disease [1]. Several reports have indicated that there are susceptibility genes for EH, including those for estrogen, estrogen receptor [2] and aromatase [3]. The final stage of estrogen synthesis is catalyzed by aromatase.

There are numerous proposed mechanisms by which estrogen may bring about beneficial effects on the cardiovascular system. However, the precise role of estrogens has been difficult to establish, perhaps due to their wide variety of actions. In humans, estrogen facilitates vasodilation by stimulating prostacyclin and nitric oxide synthesis, as well as decreasing the production of vasoconstrictor substances, such as cyclooxgenase-derived products, reactive oxygen species, angiotensin II and endothelin-1 [4]. Estrogen also reduces the number of angiotensin type I (AT1) receptors [5]. Furthermore, men are at higher risk of developing cardiovascular disease than premenopausal women, and age-matched women have been shown to have lower blood pressure than men [6].

The aromatase enzyme complex catalyzes the conversion of androgens to estrogens in a variety of tissues, including the ovary and placenta [7,8], brain [9] and adipose tissue [10]. It was recently demonstrated that both estrogens and aromatase are produced in vascular tissue, particularly in smooth muscle cells [11] and endothelial cells [12]. It has been reported that aromatase-deficient (ArKO) mice, which are deficient in estrogens due to deletion of the aromatase gene, exhibit reduced blood pressure (BP)[3]. Thus, we hypothesized that aromatase is one of the factors affecting BP, and that the aromatase gene is a susceptibility gene for hypertension, as single nucleotide polymorphisms (SNPs) in this gene are associated with differences in estrogen levels in human [13].

The human CYP19A1 gene, which encodes aromatase, consists of 503 amino acids and is located on chromosome 15q21.1 [14]. The gene is very unique; it contains 11 exons, with 9 exons being translated, interrupted by 10 introns (about 80 kb, exon 2a to exon 2), and consists of approximately 130 kilobase pairs (kb).

Organization of the human CYP19A1 gene and location of SNPs. The gene is approximately 130 kilobase pairs (kb) in length, and has a total of 11 exons. Boxes indicate exons, and lines indicate introns and intergenic regions. Filled boxes indicate coding regions. There are two transcript variants; variant 1 does not include exon 2a, and thus has a shorter 5'-UTR than transcript variant 2; variant 2 includes exon 2a. Both variants encode the same protein. Polymorphisms were expressed as nucleotide number on the sense strand of the CYP19A1 gene.

EH subjects were 218 patients diagnosed with EH according to the following criteria: seated systolic blood pressure (SBP) above 160 mmHg and/or diastolic blood pressure (DBP) above 100 mmHg, on 3 occasions within 2 months after the first medical examination. None of the EH subjects were using anti-hypertensive medication. Patients diagnosed with secondary hypertension were excluded. Control subjects were 225 healthy, normotensive (NT) individuals. None of the controls had a family history of hypertension, and they all had SBP and DBP below 130 and 85 mmHg, respectively. A family history of hypertension was defined as prior diagnosis of hypertension in grandparents, uncles, aunts, parents or siblings. Both groups were recruited from the northern area of Tokyo, Japan, and informed consent was obtained from each individual according to a protocol approved by the Human Studies Committee of Nihon University [15].

Plasma concentration of total cholesterol, and serum concentrations of creatinine and uric acid were measured using the methods of the Clinical Laboratory Department of Nihon University Hospital [16].

We selected 5 SNPs in the human CYP19A1 gene as markers for the genetic association experiment (Fig. 1). All 5 SNPs were confirmed using the NCBI website (accession numbers rs1870049, rs936306, rs700518, rs10046 and rs4646). rs1870049 and rs936306 are located in introns, rs700518 is a synonymous SNP that does not result in a change in amino acids, and rs10046 and rs4646 are located in the 3'-untranslated region. Genotypes were determined using Assays-on-Demand kits (Applied Biosystems, Branchburg, NJ) together with TaqMan® PCR. When allele-specific fluorogenic probes hybridize to the template during polymerase chain reaction (PCR), the 5'-nuclease activity of Taq polymerase is able to discriminate between alleles [17].

LD analysis and haplotype-based case-control analysis were performed with SNPAlyze version 3.2.3 (Dynacom Co., Ltd., Yokohama, Japan) using 5 SNPs. The software is available from the following website: http://www.dynacom.co.jp/products/package/snpalyze/index.html. We used |D'| values of >0.5 to assign SNP locations to 1 haplotype block. SNPs with an r2 value of <0.5 were selected as tagged. In the haplotype-based case-control analysis, the frequency distribution of the haplotypes was calculated by performing a chi-squared test using the contingency table method.

Data are shown as means ±SD. Hardy-Weinberg equilibrium was assessed by chi-squared analysis in NT controls. The overall distribution of alleles was analyzed using 2 × 2 contingency tables, and the distribution of genotypes between EH patients and NT controls was tested using a 2-sided Fisher exact test and multiple logistic regression analysis, as the results of multiple logistic regression analyses after adjusting for confounding factors are known to be highly reliable. Statistical significance was established at p < 0.05. Differences in clinical data between the EH and NT groups were assessed by student t-test. Statistical analyses were performed using SPSS software for Windows, version 12 (SPSS Inc., Chicago, IL, USA).

Table 1 shows the clinical features of the EH patients and NT controls. SBP, DBP, body mass index (BMI) and pulse rate were significantly higher in the EH group than in the NT group. Age, serum concentrations of creatinine, and plasma concentrations of total cholesterol and uric acid did not significantly differ between the two groups.

Genotype and allele distributions among NT subjects and patients with EH. 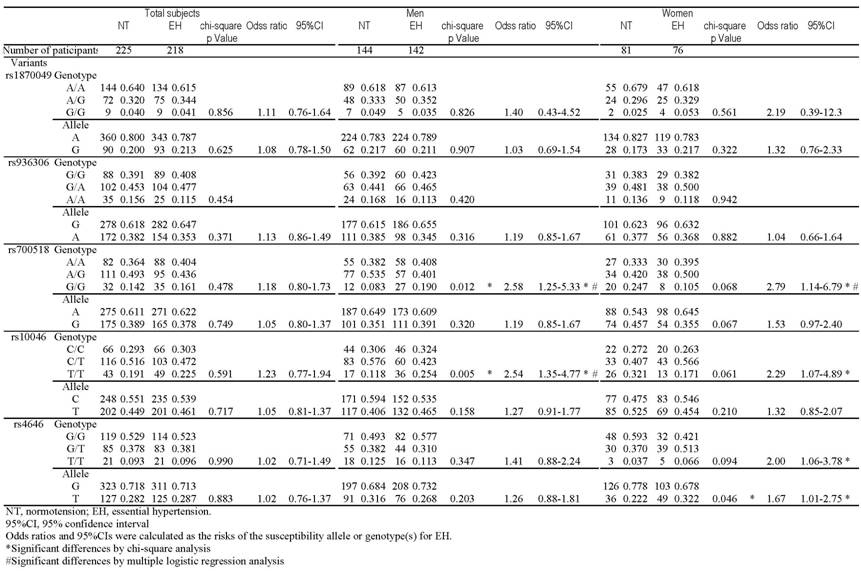 LD patterns in the CYP19A1 gene are illustrated by their |D'| values in NT groups (Table 4). The |D'| values indicate that all 5 SNPs are located in 1 haplotype block, as most |D'| values were over 0.5, except for rs1870049-rs700518, rs1870049-rs10046 and rs936306-rs10046. All pair-wise SNPs, except rs700518-rs10046, were available for the performance of a haplotype-based case-control study because all r2 values were below 0.5. Because r2 values calculated for the rs700518 and rs10046 SNPs were large, we did not perform a haplotype-based association study using the 2 SNPs in the same analysis. All 18 combinations of pair-wise SNPs were analyzed in men and women. Significant differences in overall distribution were only seen for the rs1870049 and rs10046 combination in men. Thus, the A-C haplotype is a resistance marker for EH, while the A-T haplotype is a susceptibility marker for EH. There is no overall distribution showing a significant difference in women (Table 5).

Clinical characteristics of the study partipants in each genotype.

Pairwise LD in CYP19A1 gene of each NT group.

Although systolic BP in ArKO female mice was similar to that in age- and weight-matched wild-type (WT) mice, diastolic and mean BP were lower in ArKO mice (-6.3 ± 1.9 and -4.6 ± 2.1 mmHg, respectively). The baroreflex sensitivity of ArKO mice was 46% that observed in WT mice [3]. However, there have been no previous studies on male ArKO mice or comparing data between male and female ArKO mice.

Some investigators have been reported the CYP19A1 gene variants associated with hypertension. Peter et al. found suggestive evidence of gender-specific contributions of rs4646 to DBP variation in women in the Framingham Heart Study [21]. DBP in patients with T/T genotype was significantly higher than in those without this genotype. This is very interesting because the frequencies of EH women with T/T genotype or T alleles were significantly higher in the present study when compared to NT women. In addition, our data for rs4646 also showed no significant results in men, which is also in agreement the report by Peter et al. Recently, Ramirez-Lorca et al. reported that DBP in subjects with C/C genotype in rs10046 was significantly higher than in those without C/C genotype [22]. This corresponds with our data, as the frequency of EH patients with the T/T genotype was significantly lower than that of NT subjects. However, the opposite direction of the association in men found in our study was not detected in men in their study. There are several reasons for this discrepancy between the results in our study and those of previous studies. Our study used a case-control design with patients clearly diagnosed by EH criteria, while Ramirez-Lorca et al. used a population-based cohort in the general population. Therefore, the data on blood pressure in each genotype from their study were within normal ranges. This discrepancy may be attributed to both the different criteria used in subject selection, and to racial differences in the populations studied.

In the present study, none of the SNPs were thought to have functional consequences. Possible functional mutations in the CYP19A1 gene with quantitative effects on genomic transcription, posttranslational processing or amino acid sequence have a strong linkage with genetic markers such as rs10046, and subsequently reduce the activity of aromatase associated with EH. Unfortunately, we were not able to obtain samples to measure plasma sex hormones levels and aromatase activity, due to the difficulty in obtaining written informed consent for blood examinations from subjects not receiving medications.

In conclusion, the present study was the first to examine correlations between the human CYP19A1 gene (encoding aromatase) and EH. The present data indicate that the CYP19A1 gene is a gender-specific candidate genetic marker for EH.

We would like to thank Ms. K. Sugama for technical assistance. This work was supported by a grant from the Ministry of Education, Culture, Sports, Science and Technology of Japan (High-Tech Research Center, Nihon University), and a research grant from the alumni association of Nihon University School of Medicine and TORAY, Japan.