As we previously demonstrated in human hepatocellular carcinoma (HepG2) cells, ethanol at low concentration triggers the Fas apoptotic pathway. However, its role in other intracellular signaling pathways remains unknown. Therefore, the aim of the present study was to evaluate the role of low concentration of ethanol on different intracellular signaling pathways. For this purpose, HepG2 cells were treated with 1 mM ethanol for 10 min and the phosphorylation state of protein kinases was determined. In addition, the mRNA levels of transcription factors and genes associated with the Fas apoptotic pathway were determined. Our data demonstrated that ethanol-induced phosphorylation of protein kinases modulates both anti-apoptotic and pro-apoptotic mechanisms in HepG2 cells. Pro-apoptosis resulted mainly from the strong inhibition of the G-protein couple receptor signaling pathway. Moreover, the signal transduction initiated by ethanol-induced protein kinases phosphorylation lead to increased expression of the transcription factors with subsequent expression of genes associated with the Fas apoptotic pathway (Fas receptor, Fas ligand, FADD and caspase 8). These results indicate that low concentration of ethanol exert their effect by predominant activation of pro-apoptotic events that can be divided in two phases. An early phase characterized by a rapid transient effect on protein kinases phosphorylation, after 10 min exposure, with subsequent increased expression of transcription factors for up to 6 hr. This early phase is followed by a second phase associated with increased gene expression that began after 6 hr and persisted for more than 24 hr. This information provided a novel insight into the mechanisms of action of ethanol (1mM) in human hepatocellular carcinoma cells.

The toxic effect of ethanol in the liver has been extensively demonstrated in several animal and clinical studies [2-8]. The hepatotoxic effect of ethanol directly correlates with time of exposure and the applied concentration [2-5]. High concentrations of ethanol lead to necrotic cell death [6]. This results from induction of the cytochrome P4502E1 (CYP2E1) with subsequent production of reactive oxygen species [5, 7, 8]. Interestingly, ethanol at low concentration causes apoptosis preferentially [9-11]. At such low concentration, ethanol-induced apoptosis in human hepatocellular carcinoma (HepG2) cells is triggered by activation of the Fas receptor [12], a member of the tumor necrosis family, with subsequent activation of the intracellular adapter protein FADD (Fas Associated Death Domain) and caspase-8 [13, 14]. Caspase-8 represents the key component of ethanol-induced apoptosis when applied at low concentration, as confirmed by completely suppressing apoptosis after caspase-8 inhibition [12].

Fas receptor activation has been involved not only with the apoptotic process, but also with triggering of other intracellular signaling pathways [15, 16]. These include the mitogen-activated protein kinase (MAPK) pathway [13, 17-19], and the transcription factor NFκB signal cascade [20, 21]. However, the effect of low concentration of ethanol in the intracellular signaling pathways activated by the Fas receptor pathway has not been documented. Therefore, the aim of the present study was to determine the effect of ethanol exposure at low concentration (1 mM) on protein kinases phosphorylation in human hepatocellular carcinoma (HepG2) cells. In addition, the effect of protein kinases phosphorylation on the expression of transcription factors and subsequent gene expression was determined.

Low concentration of ethanol seems to have a potential therapeutic effect for the treatment of human hepatocellular carcinoma; however, its mechanisms of action remain to be determined. This work represent the first step in our understanding of the pathophysiological mechanisms associated with ethanol exposure at low concentration, which are needed to establish its use as a potential target for the treatment of human hepatocellular carcinoma.

The rationale for using a low concentration of ethanol, namely 1 mM, was based on previous reported studies in which the potential therapeutic effect of such concentrations has been proposed [11]. In addition, human hepatocellular carcinoma (HepG2) cells were studied without comparing against normal hepatocytes because of the way HepG2 cells metabolize ethanol and because of the selective induction of apoptosis without necrosis observed in HepG2 cells exposed to 1 mM ethanol [9], which has not been observed in normal hepatocytes.

Assessment of ethanol-induced apoptosis by DNA fragmentation after GPCR inhibition

Inhibition of G-protein coupled receptors (GPCR) was performed using heparin (0.10 IU/ml) or pertussis toxin (20 pM). All chemicals were purchased from Sigma Aldrich (Seelze, Germany). HepG2 cells were pre-treated for 30 min with GPRC inhibitors followed by a washed step and incubated with ethanol (1 mM) for 24 h. Then, ethanol-induced apoptosis was analyzed by a double-fluorescence staining technique with Hoechst 33342 (excitation 330-380 nm, emission 460 nm; Molecular Probes, MoBiTec, Göttingen, Germany) and propidium iodide (excitation 590 nm and emission 620 nm; Molecular Probes, MoBiTec, Göttingen, Germany) as described previously [25]. Briefly, after 24 hours of ethanol incubation, 20 µg/ml propidium iodide and 100 µg/ml Hoechst 33342 were incubated for 15 min at 37°C in the dark. After staining, the cells were immediately examined using a Leitz DM-IRB fluorescence microscope. The numbers of cells with apoptosis-associated alterations of the nuclei and without membrane barrier dysfunction were determined within a field of view at a magnification of X400. A total of 10 randomly selected fields were counted per well. The numbers of altered cells were averaged an expressed as percentage of total cells.

Effect of inhibitors of G-protein coupled receptors (GPCR) on ethanol-induced apoptosis in HepG2 cells. Results are expressed as percent of control HepG2 cells (without ethanol exposure). Results are the mean of six different experiments (n=6). Error bars represents standard deviations. Significance is shown as the difference between ethanol-treated and control cells * p < 0.05. 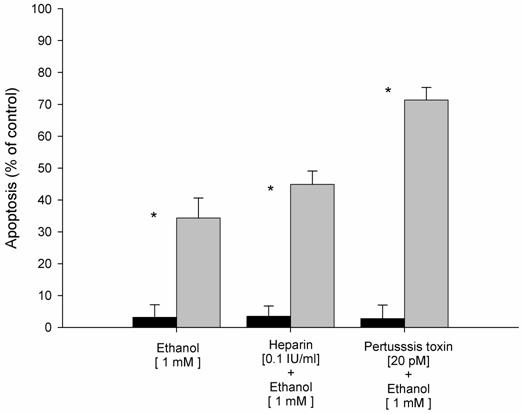 Figure 2 shows the effect of a millimolar ethanol concentration on mRNA levels of AP1, Elk1, Stat1, SRF and NFκB after 2, 4 and 6 hours of ethanol exposure using relative quantitative real time PCR. The transcription factor AP1 did not reveal any significant difference after 2, 4 and 6 hr ethanol exposure compared to controls. The mRNA expression level of Elk1 and Stat1 showed time dependent increases in mRNA expression levels of approximately 1-fold after 2 h of ethanol exposure, and 2-fold after 6 hr exposure. SRF was significantly increased after 2 hr by 7-fold with subsequent decrease to about only 1-fold after 4 hr and 6 hr. In contrast, NFκB was significantly increased after 2 hr of ethanol exposure with a maximal effect seen after 6 hr, representing increases of 1- and 12-fold, respectively. These data confirm the effect of ethanol on intracellular signal transduction resulting in increased expression of transcription factors. 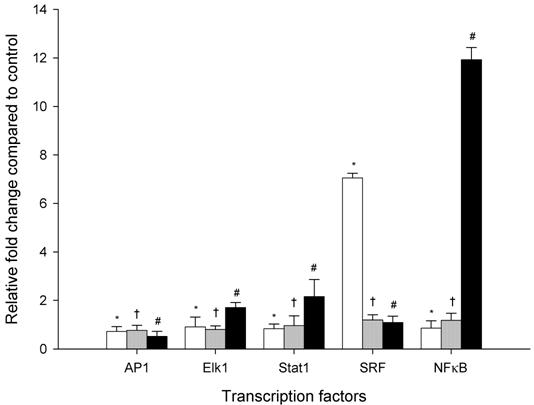 
Ethanol regulates the expression of genes of the Fas signaling cascade

The working hypothesis of the present study was that apoptosis induced by low concentration of ethanol (namely 1 mM) in HepG2 cells is regulated through the interaction of both pro-apoptotic and anti-apoptotic signaling pathways. The pro-apoptotic effect induced by ethanol was demonstrated by a strong inhibition of GPCR signaling pathway in association with a slight inhibition of JNK and NFκB signaling in association with a slight activation of the cell death receptor signaling. In addition, ethanol also phosphorylated protein kinases belonging to signal transduction pathways with an anti-apoptotic effect such as ERK and CDK. These data, corroborate that ethanol-induced phosphorylation of protein kinases modulates both anti-apoptotic and pro-apoptotic mechanisms, and suggests that ethanol at low concentration shifts the balance into the apoptotic direction after its initial effect on protein kinases phosphorylation.

The most strikingly and novel finding obtained hereby was the strong inhibition of the GPCR signaling pathway induced mainly by increased phosphorylation of GRK2. This finding suggests an important regulatory role of ethanol-induced apoptosis through early phosphorylation of GRK2. Our data correlates with the reported involvement of this protein kinase in the regulation of signal transduction initiated through the GPCR [26, 27]. Furthermore, the regulatory mechanism of ethanol-induced apoptosis through the GPCR signaling pathway was also confirmed by the increased apoptotic rate observed after neutralization of GPCR. These findings provide a novel insight into the molecular mechanism of action exerted by the exposure of 1 mM ethanol concentration in human hepatocellular HepG2 cells.

The NFκB signaling pathway is known to be one of the key regulators of anti-apoptotic processes observed in human hepatocytes derived cell lines [34, 35]. Studies performed in T cells have demonstrated that the NFκB signaling pathway mediates cell growth and protection against apoptotic cell death [36]. The kinase IKKα plays a key step in the activation of NFκB [37]. Our data demonstrated that ethanol inhibits the anti-apoptotic effect of the NFκB signaling pathway by reducing the phosphorylation of IKKα. Moreover, the increased expression of mRNA levels of NFκB after 6 hr of ethanol exposure, suggests a regulatory role of this pathway in ethanol-induced apoptosis.

Taking these data together, we propose a regulatory mechanism of ethanol-induced apoptosis in HepG2 cells (as described in Figure 4 and 5). This regulatory mechanism results from the balanced interaction between pro-apoptotic and anti-apoptotic effects of various intracellular signaling pathways. Specifically, ethanol at low concentration induced a biphasic effect in HepG2 cells, characterized by a rapid transient effect on protein kinases, after 10 min exposure, followed by increased expression of transcription factors up to 6 hr (early events phase) and a second persistent activation of gene expression that began after 6 hr and persisted for more than 24 hr (late events phase). The early events phase was characterized by significant change in the phosphorylation state of protein kinases with subsequent induction of transcription factors. Such changes were associated with either inhibition or activation of various intracellular signaling pathways leading to a pro-apoptotic effect. These findings suggest that low concentration of ethanol shifts the balance into the apoptotic direction after its initial effect on protein kinases. The second phase or late events, between 6 and 24 hr is characterized by expression of Fas-associated genes (including Fas receptor, Fas ligand, FADD and caspase 8).

Regulatory mechanism of low concentration of ethanol resulting from the balanced interaction between pro-apoptotic and anti-apoptotic effects of various intracellular signaling pathways. 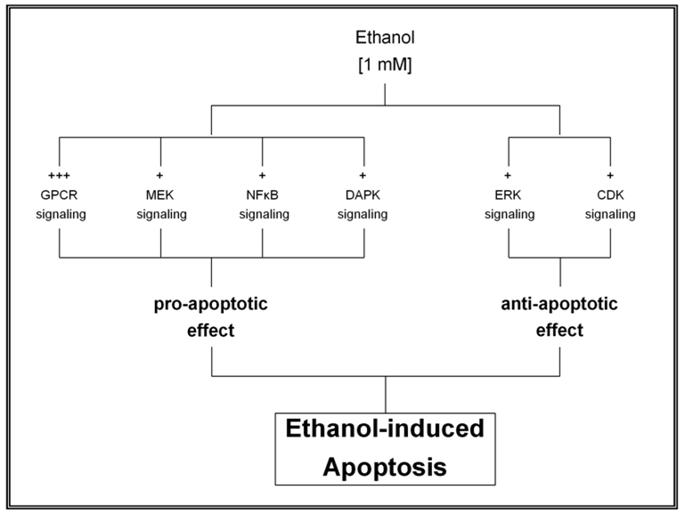 In conclusion, the data obtained in the present study support our working hypothesis and confirm a balance between pro- and anti-apoptotic effects. Ultimately, the fine balance between these two processes would lead to a controlled regulation of ethanol-induced apoptosis in HepG2 cells exposed to low concentrations of ethanol. The findings of the present study provide new evidence that ethanol at low concentration is not simply an activator of Fas receptor-induced apoptosis. This model represents the basis for further studies addressing the pathophysiological mechanisms of exposure to low concentration of ethanol in HepG2 cells, and provides information about potential targets for the treatment strategies of human hepatocellular carcinoma.

We thank Dr. Rolf K-H. Kinne for his valuable support.

3. Lieber CS. Alcohol and the liver: metabolism of alcohol and its role in hepatic and extrahepatic diseases. Mount Sinai J Med. 2000 ;67:84-94