Phyllodes tumor of the breast is a biphasic fibroepithelial neoplasm. A 30-year-old woman presented with a 1-year history of a palpable, asymptomatic right breast mass without axillary lymphadenopathy and family history of breast carcinoma. Malignant phyllodes tumor was diagnosed. The authors present not previously described histological appearance of this tumor where an epithelial component was identical to that of a tubular adenoma of the breast, with the review of the literature. This is in addition to very rare liposarcomatous stromal differentiation in the malignant phyllodes tumor.

Phyllodes tumors are rare entity in the breast. They make up less than 1% of all breast tumors [1]. The majority of these lesions behave in a completely benign fashion in that they do not have metastatic potential, leaving local recurrence as the only real concern. Local recurrence per se is not an indicator of malignancy because it has been described in benign, borderline, and malignant phyllodes tumors.

Phyllodes tumors are characterized by a combination of hypercellular stroma and cleft-like or cystic spaces lined by epithelium, into which the stroma classically project in a leaf-like fashion. There are wide variation in histological appearances between different tumors, ranging from those which resemble fibroadenomas, apart from increased stromal cellularity and mitotic activity, to those showing a diffuse overgrowth of highly pleomorphic stromal cells resembling a soft tissue sarcoma, with a spectrum of appearances intermediate between these extremes [2].

A 30-year-old woman presented with a 1-year history of a palpable, asymptomatic right breast mass. There was no family history of breast carcinoma. No axillary lymphadenopathy was identified. Mammography and ultrasound revealed well circumscribed mass in the lower outer quadrant of the right breast. The excisional biopsy was performed. Malignant phyllodes tumor has been diagnosed. The tumor was completely excised. Clinical follow-up for 12 months has not revealed any evidence of focal disease recurrence, metastasis or any mass in the contralateral breast.

The epithelial component was of particular interest. It demonstrated a proliferation of moderately dilated compact, rounded regular glands, partially with eosinophilic proteinaceous material, without atypia or mitotic activity, typically seen in a tubular adenoma of the breast (Fig.4,5). These glands contained a prominent myoepithelial cell layer what was confirmed by immunohistochemical stains.

Phyllodes tumors of the breast are fibroepithelial neoplasms that have the potential for recurrence and metastases. Grading into benign, borderline, and malignant categories is based on a constellation of histological characteristics that include the degree of stromal hypercellularity, stromal cytologic atypia and mitotic activity, stromal overgrowth, and circumscribed vs. invasive margins [2]. Although histological features have been helpful to some extent in predicting biologic behavior, specific parameters that can define the likelihood for recurrence are not universally accepted. Various investigators have found cellular pleomorphism, stromal overgrowth, tumor necrosis and heterologous stromal elements, or a combination of histological features to be prognostically useful. On the other hand, several authors have concluded that adequacy of surgical margins is of paramount importance and that histological factors have an inconsistent influence on biologic behavior [3].

On gross examination, a typical phyllodes tumor is notable for leaf-like fronds projecting into cystic spaces. Many phyllodes tumors, however, are simply solid and vaguely lobulated. Well developed fronds consist of epithelial-lined stromal projections that protrude into dilated glands or cystic spaces. The glands are usually widely spaced, dilated, and irregular with prominent side branches. The epithelium is often hyperplastic, and atypical columnar cell hyperplasia is a common finding. Rare tumors show lobular and ductal carcinoma in-situ. Apocrine and squamous metaplasia is occasionally seen [6-8].

To the best of our knowledge, we are reporting the first case in which an epithelial component of phyllodes tumor is identical to that of a tubular adenoma of the breast. And this is in addition to very rare liposarcomatous stromal differentiation in malignant phyllodes tumor. This tumor does not represent a collision tumor, i.e. tubular adenoma being immediately adjacent to the phyllodes tumor, because macroscopically cut section did not show separate masses, and microscopically lipoblasts widely infiltrated among epithelial glands. This tumor further expends the phenotypic features of phyllodes tumor. 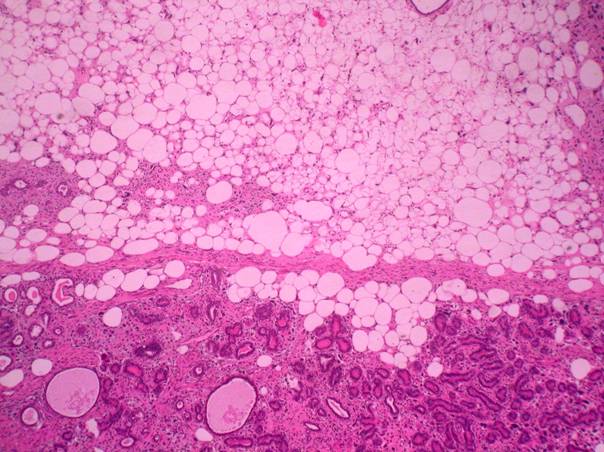 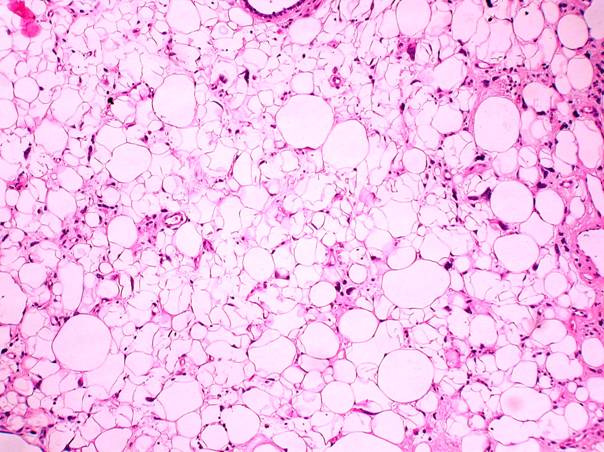 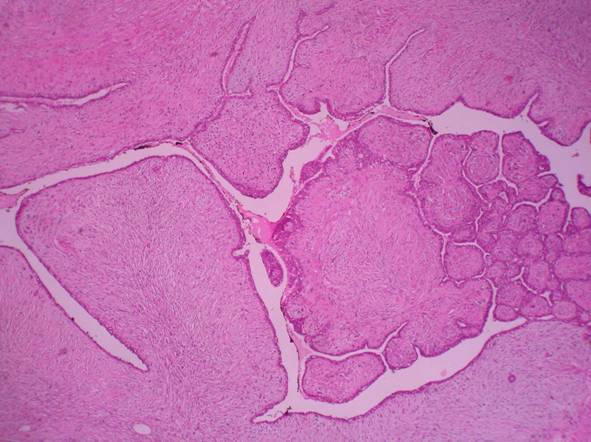 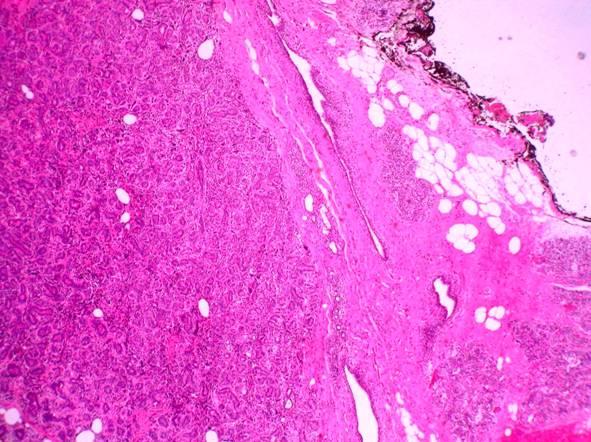 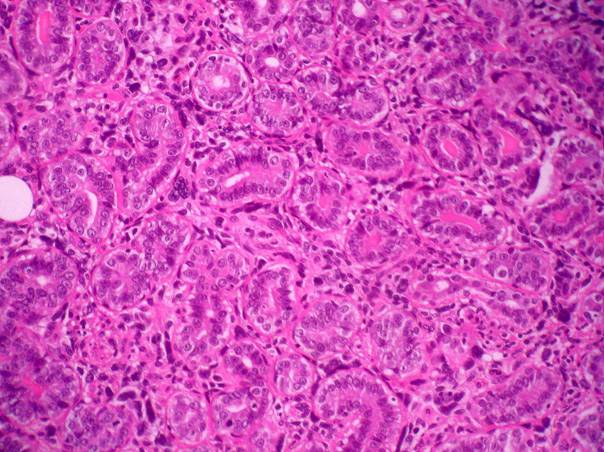