Background: Helicobacter pylori has now been widely recognized as a causative agent of gastroduodenal diseases. The development of safer anti- H. pylori compounds is desirable due to the antibiotic-resistant strains emerged to date.

Methods: We successfully developed the compounds of Rice-fluid derived from unpolished, polished, and usually cooked Japanese rice, and investigated their in vitro antibacterial activities by means of the Time-Kill-Curve methods against various species of bacteria including H. pylori strains.

Results: All of the compounds revealed keen bactericidal activities against H. pylori, followed by Streptococcus pneumoniae and Campylobacter jejuni strains, but failed to affect the viability of other bacterial species investigated including staphylococci, enterococci, Pseudomonas aeruginosa, and other gram-negative rods belonging to the family Enterobacteraceae. The bactericidal activities were demonstrated to be time- and concentration-dependent.

Conclusions: The compounds of Rice-fluid are considered to be potentially new and safe therapeutic regimens against H. pylori infections. The mechanism of their bactericidal activities against H. pylori strains remains to be elucidated.

Helicobacter pylori is a gram-negative, helical rod that colonizes human gastric mucous layer and mucous gel layer [1-3]. In humans, infection of H. pylori has been regarded as a major cause of chronic gastritis and peptic ulcer, and is important in the pathogenesis of gastric cancer and gastric mucosa-associated lymphoid tissue (MALToma) [4-7]. The eradication of H. pylori can, therefore, contribute to the treatment and prevention of these diseases. H. pylori eradication accelerates peptic ulcer healing [8], reduces the recurrence of gastric cancer after resection [9], and leads to regression of low-grade gastric MALToma [10]. Currently, new triple therapies consisting of two antibiotics and a proton pump inhibitor actually demonstrate high eradication rates. However, some problems remain. H. pylori rapidly acquire resistance to some antibiotics. Indeed, H. pylori strains resistant to clarithromycin and metronidazole have been increasing [11-18]. In the near future, antibiotic resistance will be the utmost impediment in the chemotherapy of H. pylori infection. In addition, new triple therapies occasionally cause side effects; nausea, vomiting, epigastric pain, abdominal discomfort, or diarrhea [19]. Therefore, a search of some new antibacterial agent, both highly effective and safe, and preferably proves only active against H. pylori strains, is desirable for the treatment of H. pylori infection.

Some investigators have documented that various medicinal plant extracts confirm antibacterial activities [20-24].  We investigated the in vitro antibacterial activity of hitherto undescribed compounds of our successfully developed Rice-fluid derived from Japanese unpolished and polished Japanese raw rice, against a variety of bacterial species commonly encountered in human infections, including H. pylori strains.

In this study, two standard strains, that is ATCC4350 (type strain) and ATCC43526, and 14 clinical isolates of H. pylori (H-1 to H-14) were used. The clinical isolates had been obtained from patients at Shinshu University Hospital, Matsumoto, 390-8621, Japan. Their isolation and identification had been carried out as described previously [13, 15]. Five strains, respectively, of Staphylococcus aureus, Staphylococcus epidermidis, Streptococcus pneumoniae, Enterococcus faecalis, Escherichia coli, Pseudomonas aeruginosa, and three strains of Klebsiella pneumoniae and two strains of Klebsiella oxytoca were also investigated for the antibacterial evaluation study. They were all the clinical isolates from patients at Shinshu University Hospital, Matsumoto 390-8621, Japan. They were all stored in Micro-Bank vials (Pro-Lab Diagnostic, Ontario, Canada) at -83°C in a deep freezer, after identification by Vitek II (bioMerieux Japan Ltd., Tokyo, Japan) system and/or MicroScan WalkAway (Dade Behring Inc., Illinois USA) system. In addition, five clinical strains of Campylobacter jejuni were also included in this evaluation study, which were the kind gift from Miroku Medical Laboratory, Saku, Nagano 384-2201, Japan. Prior to the investigation, H. pylori, S. pneumoniae and C. jejuni strains were grown on Sheep Blood agar (Nippon Becton Dickinson Ltd., Tokyo, Japan) plates at 37°C for 2 days in a microaerophilic atmosphere. In addition, S. aureus, S. epidermidis, E. faecalis, E. coli, K. pneumoniae, K. oxytoca and P. aeruginosa strains were cultured overnight on Heart Infusion agar plates (Eiken Chemical Co., Osaka, Japan) in the atmosphere at 37°C, and were used for this study.

Manufacturing design of the Rice-fluid

We successfully developed the compound of Rice-fluid derived from Japanese raw rice. Manufacturing of the Rice-fluid was conducted in five phases. Phase 1 involved the addition of 2 to 20-times volume of distilled water to either of the two kinds of raw Japanese rice, such as unpolished or polished rice. Phase 2 involved their incubation at 100 to 190°C under the pressure of 0.01 to 0.8MPa for 60min. In phase 3, they were completely mixed by homogenizing, and were cooled down to 40 to 55°C. In phase 4, they were treated for 10 to 120min., with addition of some amount of proteinase and amylase complex including α-amylase, β-amylase, and gluco-amylase. In the last phase 5, the enzymes added were inactivated by heating the mixture up to 95°C. These Rice-fluids, however, have recently been adopted to several kinds of liquid food as the main supplemental ingredient, and have been commercially available all over Japan. In this experiment, the four test compounds were investigated for the bactericidal activities, consisting of three kinds of Rice-fluid derived from the two kinds of raw rice; i. e., polished (pH6.32) and unpolished (pH5.98), and the usually cocked rice (pH5.91), and remaining one compound of the fluid of usually cocked rice itself (pH5.68) which was neither treated with any kind of enzyme nor unheated under the high pressure.

Bactericidal activities were determined by using an in vitro time killing assay [14, 16]. A bacterial suspension of 16 H. pylori strains (100μl, approximately 108CFU/ml) was inoculated into 1ml of a Rice-fluid, a ten-fold-dilution Rice-fluid and a pH-adjusted (to the pH of respective Rice-fluid) physiological saline solution, respectively. The cultures were incubated with gentle shaking at 37°C in a microaerophilic atmosphere. Samples (100μl) for viability measurement were taken at various points of time, that is, 30min., 60min., and 120min., respectively. Viability was determined by the plate colony count technique. After serial 10-fold dilution technique with saline solution, 100μl of each sample was plated onto Sheep Blood agar plates. Appearing colonies were counted after 3 days of incubation at 37°C in a microaerophilic atmosphere. The remaining bacterial species were also determined in almost the same manner as in the case of H. pylori strains described above. Heart Infusion agar plates (Eiken Chemical Co., Osaka, Japan) were used instead of Sheep Blood agar plates (Nippon Becton Dickinson Ltd., Tokyo, Japan), and incubation was performed at 37°C under ambient air.

Effect on the morphology of H. pylori cells

H. pylori ATCC43526 strain was inoculated into 1ml of the Rice-fluid. After exposing to the Rice-fluid at 37°C in a microaerophilic atmosphere, an aliquot of the sample for morphological study was taken at various times, then fixed with ethyl alcohol solution and Gram-stained H. pylori cells were observed microscopically (×1,000; Olympus, Tokyo, Japan).

Fig. 1 is the killing kinetics of various kinds of Rice-fluid against H. pylori ATCC43526 strain. Among them, both the Rice-fluids derived from unpolished and polished Japanese raw rice revealed remarkably strong bactericidal activities, and followed by the Rice-fluid derived from usually cooked Japanese rice. The number of viable H. pylori cells decreased progressively by exposure to the Rice-fluid and reached less than the assay limit within 60min. Nearly the same bactericidal activities were demonstrated against respective 5 strains of both S. pneumoniae and C. jejuni (data, not shown.). On the other hand, usually cooked Japanese rice itself and the pH-adjusted physiological saline solution demonstrated no bactericidal activities against H. pylori ATCC43526 strain. The remaining ATCC43504 type strain and 14 clinical H. pylori strains (H-1 to H-14) simultaneously tested showed almost exactly the same results with those of H. pylori ATCC43526 strain.

Bactericidal Activity against strains other than H. pylori, C. jejuni, and S. pneumoniae

Any kind of Rice-fluid demonstrated to be lacking in bactericidal activity against E. coli E1 strain, as shown in Fig. 3. Almost exactly the same phenomena were observed against other four strains of E. coli, five strains of S. aureus, S. epidermidis, E. faecalis and P. aeruginosa, and three strains of K. pneumoniae and two strains of K. oxytoca, respectively (data not shown).

Effect on Morphology of H. pylori

The results of morphological study are shown in Fig. 4. H. pylori cells aggregated with each other and formed clusters (Fig. 4) by exposure to the Rice-fluid derived from unpolished Japanese raw rice.

We investigated the in vitro antimicrobial activities of the three kinds of Rice-fluid against various species of microorganisms including H. pylori strains by the time-kill-curve assay [14, 16]. Every kind of Rice-fluid derived from unpolished and polished raw rice, and from usually cooked Japanese rice demonstrated strong bactericidal activities only against H. pylori, S. pneumoniae and C. jejuni strains. Among the three species described above, the compounds revealed strikingly strong activities against H. pylori strains as demonstrated in Figs. 1 and 2. Among the three compounds, bactericidal activities of the Rice-fluid derived from usually cooked Japanese rice were less active than those of the two kinds of Rice-fluid derived from unpolished and polished Japanese raw rice. However, other compounds such as usually cooked Japanese rice itself together with pH-adjusted physiological saline solution revealed no antibacterial activity against the microorganisms examined, as shown in Fig. 1. Moreover, it should be noted that any kind of Rice-fluid was proved to be devoid of bactericidal activity against 5 strains of E. coli, S. aureus, S. epidermidis, E. faecalis and P. aeruginosa, and 3 strains of K. pneumoniae and 2 strains of K. oxytoca, respectively. The representative case of E. coli E1 isolate was shown in Fig. 3.

It is noteworthy that the bactericidal activity was demonstrated only against the restricted bacterial species such as H. pylori, C. jejuni and S. pneumoniae, which were known to grow well under microaerophilic atmosphere. The most interesting findings are that the bactericidal spectrum of the 'Japanese rice-fluid' is rather narrow. In fact, the bactericidal activities were expressed against only the restricted bacterial species sharing with the common properties that their growths are dependent on and/or enhanced under strengthened CO2 gas conditions.

On the other hand, the emergence of antibiotic resistant H. pylori strains has been increasing and the problems for the chemotherapy have also been growing. The new and safer anti-H. pylori agents with high selective toxicity are urgently desirable. As mentioned above, it should be noted that no compounds examined in this study demonstrated antibacterial activity against E. coli, K. pneumoniae, K. oxytoca, E. faecalis, the representative well known normal inhabitants of human intestinal flora. Provided that the new agent had been determined and isolated from the Rice-fluid, and had become available for clinical use, it would be outstandingly favorable against H. pylori infections for not interfering the normal bacterial flora in the intestine of humans. Moreover, it should also be advantageous that the compounds of Rice-fluid failed to affect the survival of S. aureus, S. epidermidis, and P. aeruginosa, demonstrating that the antibacterial spectrum of the Rice-fluid was extremely narrow and only active against the restricted organisms.

Thus, these findings imply that the compounds of Rice-fluid derived from Japanese raw rice possibly contain bactericidal agents demonstrating to have potentials as new therapeutic agents against H. pylori infection. The mechanisms in detail of bactericidal activity against the three species, especially H. pylori strains remain to be elucidated. 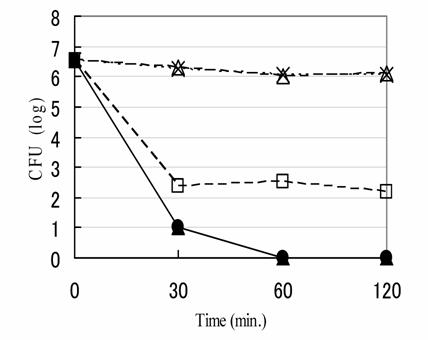 Bactericidal activity of Rice-fluid derived from unpolished Japanese rice against Helicobacter pylori strains. H. pylori strain was exposed to undiluted Rice-fluid from unpolished Japanese rice (●), to ten-fold diluted Rice-fluid (△) and to pH-adjusted physiological saline solution (×) as a control. Samples were taken at the time indicated, and viability was determined by the plate colony count procedure.

Bactericidal activity of Rice-fluid derived from unpolished Japanese rice against clinical Escherichia coli E1 isolate. Clinical E. coli E1 isolate was exposed to Rice-fluid derived from unpolished Japanese rice (●), from ten-fold dilution Rice-fluid (△) and to pH-adjusted physiological saline solution (×) as a control. Samples were taken at the time indicated, and viability was determined by the plate colony count procedure. 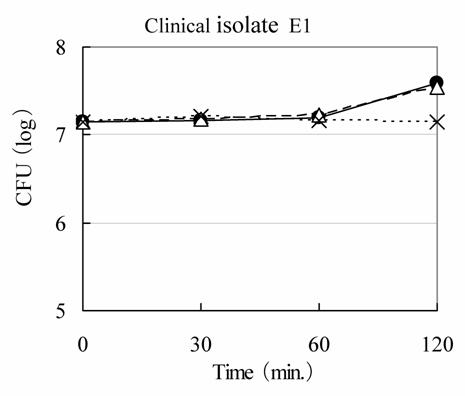