Lichen planus is a mucocutaneous disease of inflammatory nature and unknown etiology. It is characterized by a cell-mediated immunological response to induced antigenic change in skin and/or mucosa. The possible malignant transformation of lichen planus remains a subject of controversial discussions in the literature. hMSH2 is one of the human DNA mismatch repair (hMMR) genes and it plays an important role in reducing mutation and maintaining genomic stability. hMSH2 alterations have been reported in oral squamous cell carcinoma and there are evidences suggesting the association between oral lichen planus and squamous cell carcinoma. In this study, we aim to investigate the immunolocalization of hMSH2 protein in oral lichen planus compared to oral normal mucosa epithelium. We examined the expression of hMSH2 protein by immunohistochemistry in twenty-six cases of oral lichen planus. Clinically, 12 of them were categorized into reticular subtype and 14 were atrophic/erosive. Ten cases of normal mucosa were added to the control group. Results showed that the percentage of positive cells to hMSH2 was smaller in reticular (46.54%; p=0,006) and atrophic/erosive (48.79%; p=0,028) subtypes of oral lichen planus compared to normal mucosa (61.29%). The reduced expression of hMSH2 protein in oral lichen planus suggests that this lesion is more susceptible to mutation and therefore facilitate the development of oral squamous cell carcinoma.

Lichen planus is a chronic inflammatory mucocutaneous disease of unknown etiology that frequently involves the oral mucosa. The disease affects skin and mucosa in prevalence estimated between 0.5 and 2.0% of the population with predilection for females and a mean age at onset in the fourth or fifth decade [1]. Lichen planus affects the oral mucosa and lesions may occur without skin lesions. About half of the patients with skin lesions have oral lesions, whereas about 25% present with oral lesions alone [2].

Oral lichen planus (OLP) may present anywhere in the oral cavity. The buccal mucosa, tongue and gingival are the most common sites, whereas palatal lesions are uncommon [3]. They are usually symmetrical and bilateral lesions or multiple lesions may occur in the mouth [4]. OLP can appear clinically in at least six forms that can occur separately or simultaneously: reticular, papular, plaque, atrophic, erosive and bullous [2]. The reticular, papular, plaque-like forms are usually painless and appear clinically as white keratotic lesions. The erosive, atrophic and bullous forms are often associated with a burning sensation and in many cases can cause severe pain [5].

The possible malignant transformation of OLP is a subject of controversial discussion in the literature. While some studies support a premalignant nature of OLP [6,7], others argue against the validity of this statement [8,9]. It has been reported that the actual overall frequency of OLP malignant transformation varies between 0.3 and 12.5% [6,9]. Analysis of the published data is difficult because of differences in diagnostic criteria, time to follow-up and information on exposure to known oral carcinogens [10]. The diagnostic criteria are major problem as there is no accepted standard [9]. Whether cancer development is part of the natural evolution of OLP lesions or is due to extrinsic factors is unknown [11]. However, the association between chronic inflammation with a variety of epithelial malignancies has been recognized [12]. There is now enough evidence to suggest that the inflammatory cells and cytokines found in peri-tumoural stroma can contribute to tumor development and progression rather than mount an effective host antitumor response [12].

The human DNA mismatch repair (hMMR) system plays an important role in reducing mutation and maintaining genomic stability. It corrects base-base mismatches and short insertions/deletions generated as a consequence of DNA replication errors and homologous recombination [13]. MMR genes, including hMSH2, hMLH1, hMSH3, hMPS1, hPMS2 and GTBP/hMSH6 are very important in distinguishing and repairing misparing and slippage errors in DNA synthesis. The mismatch is detected by two complexes, the hMSH2-GTBP/hMSH6 and the hMSH2-hMSH3 heterodimers after interaction with hMLH1-hPMS2 heterodimers, an endonuclease is activated and incises the newly synthesized DNA strand that contains the mutation [14]. Immunohistochemical study on non-polyposis colorectal cancer demonstrated no expression of hMSH2 gene in the tumoral cells [15]. With regard to sporadic forms of tumors, reduced expression of hMSH2 have been reported in a distinct subset of oral and neck squamous cell [16], colorectal [17], endometrial [18], ovarian [19] and urinary bladder carcinomas [20]. As hMSH2 alterations have been reported in oral squamous cell carcinoma and there are evidences suggesting the association between oral lichen planus and squamous cell carcinoma, in this study, we aim to investigate the immunolocalization of hMSH2 protein in oral lichen planus compared to oral normal mucosa epithelium.

The hMSH2 protein staining was performed by the LSAB kit (DAKO, Carpinteria, USA). Briefly, 3 μm sections were dewaxed in xylene and hydrated with graded ethanol. Removal of formolic pigment was performed. Endogenous peroxidase was blocked by incubating sections in 6% (v/v) H2O2/methanol. Slides were placed in 10mM citrate buffer (pH 6.0) and heated to 96°C in a steamer for 30 minutes and incubated with the primary antibody for 18 h at room temperature. The primary serum used were anti-hMSH2 (Clone G219-1129, Pharmingen, San Diego, USA) diluted 1:100 in 20 mmol/L Tris-HCl buffer (ph 7.4) containing 0.9% NaCl. After washing in the Tris-HCl buffer, sections were incubated for 30 min at room temperature with biotinylated multi-link swine anti-goat, mouse and rabbit immunoglobulin. Sections were washed and incubated for 30 min at room temperature with prediluted streptavidin-peroxidase conjugated. The peroxidase activity was visualized by applying 0.01% diaminobenzidine tetrahydrochloride and 0.03% H2O2. Sections were counterstained with Meyer's haematoxylin and mounted in PermountTM. Negative controls consisted of omission of the primary or the secondary antibody or primary incubation in the presence of non-immunized rabbit serum instead of the primary antibody.

The immunolocalization of hMSH2 was quantitatively analyzed. Epithelial cells were considered to be positive if there was any staining of the nucleus, regardless of staining intensity. Cell counting was performed in six high-power microscopic fields (400x, Standard 20, ZEISS), which comprised almost all of the OLP epithelium. The count was performed by two investigators without knowledge of whether the samples were control or experimental. The total number of basal and suprabasal epithelial cells along the six microscopic fields and the number of basal and suprabasal cells stained to hMSH2 protein were assessed. The percentage of cells stained to hMSH2 was obtained to each sample. As percentage does not conform normal distribution, the Mann-Whitney Test was used for statistical analysis. The values were considered significantly different when the p value was less than 0.05.

The hMSH2 immunoreativity was detected mainly in basal and intermediate epithelial layers (Fig. 1 and 2). The mean percentage of positive epithelial cells to hMSH2 in OLP and oral normal mucosa were listed in table 1. The percentage of positive cells in reticular and atrophic/erosive subtypes of OLP was significantly decreased compared to oral normal mucosa (Table 1). No difference was detected between the reticular and atrophic/erosive subtypes.

Several conditions in oral pathology have been characterized as premalignant and many factors have been considered to promote the development of carcinoma in the oral cavity. An important question still relates to the precancerous potential of oral lichen planus [22]. Most studies have shown that patients with OLP develop oral cancer at an increased rate as compared with the general population [4,7,11]. Many articles are found in the literature suggesting an association of lichen planus to oral squamous cell carcinoma, but several of them suffer from poor documentation. The most common errors resulting in misleading conclusions are: the initial diagnostic errors, the inclusion of cases that had a known history of exposure to recognized carcinogens, and the report of cases of lichenoid dysplasia as malignant transformation of lichen planus. Despite differences in experimental designs, the majority of studies have reported a rate of malignant transformation of OLP between 0.5 and 2% over five-year period [23].

OLP is a T-cell-mediated chronic inflammatory disorder of unknown etiology. Histopathologically it is characterized by a sub-epithelial lymphocytic infiltrate, disruption of epithelial basement membrane, degeneration of basal keratinocytes, hyperkeratinization and acanthosis [24]. Basal cells are the prime target of destruction in OLP. The mechanism of basal cell damage is related to a cell-mediated immune process involving Langerhans cells, T lymphocytes and macrophages [5]. The majority of OLP-related T-cells are activated cytotoxic CD8+ T-cells, which are known to trigger keratinocyte apoptosis via TNF-alpha release [25].

The association between chronic inflammation with a variety of epithelial malignancies has been recognized. Examples of well known association between inflammation and cancer risk include, inflammatory bowel diseases and colorectal cancer, atrophic gastritis and gastric cancer, gall bladder cancer related to chronic cholecyistitis, and esophageal carcinoma after reflux esophagitis [12]. There is now enough evidence to suggest that in some instances inflammatory cells and cytokines found in peritumoral stroma can more likely contribute to tumor development and progression than to mount an effective host antitumoral response [12]. Recent studies have focused on the stromal inflammatory environment before the malignant lesions appear, and have underlined its active role during the transition from normal tissue to in situ and invasive carcinoma [26]. Stromal cells and their products, in association with insoluble intracellular matrix components, can act as an oncogenic agent, causing the disruption of homeostatic regulation of adjacent cells, such as tissue architecture, cell death and proliferation, and leading to the development of solid neoplasia, such as breast, colon and prostate carcinoma [27]. Additional studies are necessary to establish whether OLP could be classified among these chronic disorders. Many inflammatory factors known to be related with cancer initiation, progression, and invasion are also expressed by OLP-related chronic inflammatory infiltrate, and thus may contribute to OLP malignant transformation [24].

hMSH2 is especially expressed in human cells that are undergoing rapid renewal: in the lower-two thirds of gastrointestinal glands [15], in the more primitive testicular germ cells [28], in the transitional epithelial cells of the bladder [20], and in the basal cell line of epidermis and oral mucosa [29]. Inactivation of hMSH2, one of the most commonly hMMR genes, is a described alternative pathway in cancer development and progression. The resulting genetic instability is characterized by somatic mutations in repetitive sequences of tumor DNA and is termed microsatellite instability [13]. Although described in a variety of tumors [17-20], hMMR deficiency has been studied predominantly in colorectal carcinomas. A distinct proportion of sporadic (and almost all hereditary) non-polyposis colorectal cancers exhibit hMSH2 gene alterations. These tumors show high frequency of microsatellite instability and are immunohistochemically characterized by the lack of hMSH2 protein expression [15]. Moreover, Lo Muzio et al. [29] reported that 5% of the cases of oral squamous cell carcinoma show diminished expression of hMSH2 protein.

In the present study, we demonstrated decreased expression of hMSH2 protein in reticular and atrophic/erosive OLP compared to oral normal mucosa. This reduction probable occurred by the destruction of basal layer provoked by immune response. da Silva Fonseca & do Carmo [30] showed that OLP kerationocytes present higher PCNA index and AgNOR numbers than epithelial cells from normal mucosa, which suggests increased cellular proliferation in OLP. As DNA damage is more prone to occur during the cell cycle, it can be assumed that a higher index of cellular proliferation in OLP would require an increased immunolocalization of hMSH2. Therefore, the reduced expression of hMSH2 protein could make the epithelium of OLP more susceptible to DNA mutation, making it prone to oral squamous cell carcinoma development. Further studies are necessary to confirm this hypothesis.

This investigation was supported in part by grants from FAPEMIG, PRONEX and CNPq, Brazil. Dr. Gomez RS is research fellow of CNPq.

* Statistically different when compared to oral normal mucosa. No statistical difference was observed between OLP subtypes. 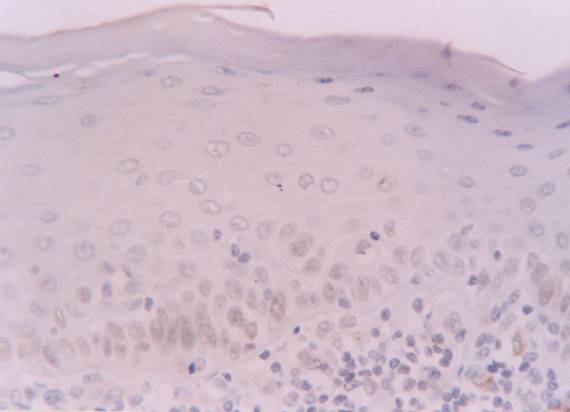 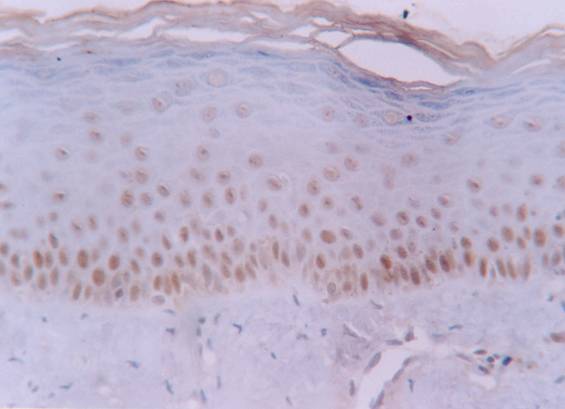 Flávio Juliano Garcia Santos Pimenta, DDS, is pursuing postgraduate study at the School of Dentistry, Universidade Federal de Minas Gerais. His research interests include molecular analysis of genes associated with oral diseases. His current work is in the analysis of wwox gene in oral cancer.

Maria das Graças Rodrigues Pinheiro, DDS, has concluded her MS at the School of Dentistry, Universidade Federal de Minas Gerais and is lecturer at Centro de Ensino Superior do Pará (CESUPA), Belém. Her research interests include radiographic investigation of oral diseases. Her current work is in radiographic analysis of odontogenic tumors.