We describe a rare variant of papillary thyroid carcinoma (PTC), the Cribriform-Morular Variant (C-MV). A handful of cases have been described in the literature of this entity. They exhibit the morphologic features of a distinctive papillary neoplasm along with solid, cribriform, and squamoid-morular areas. The cribriform and morular features make this a separate entity which could be mistaken for a high grade aggressive thyroid neoplasm. These lesions are usually associated with familial adenomatosis polyposis (FAP) but rarely may be sporadic. We report three cases that we have encountered.

Specimens revealed well-circumscribed, somewhat lobulated tan masses ranging from 1.5-2 cm with multiple satellite nodules. There was no lobe predilection. There was no necrosis or hemorrhage seen. The remainder of the thyroid was lobulated and beefy. Few lymph nodes were also identified.

The typical nuclear features of PTC could be seen. They were complex branching papillary structures lined by cuboidal cells. The nuclei were hyperchromatic, optically clear with longitudinal grooves and showed eosinophilic, intranuclear and cytoplasmic inclusions as in classic PTC (Fig 1). Some lesions showed an intricate blending of several histological patterns (Fig 2). Cribriform areas had back-to-back follicles with anastomozing bars and arches of cells in the absence of intervening fibrovascular stroma and accounted for 30-50% of the lesions (Fig 3). The solid areas, which were approximately 20-30%, consisted of whorls of cells that form squamoid morules or nests that typically do not show any keratinization or intercellular bridges (Fig 4). No colloid or psamomma bodies were found in the tumors. Case 3 also showed foci of tall and columnar cell features.

Cribriform-Morular Variant (C-MV) of PTC is a rare morphologic entity. It was first described by Harach et al. [1] in association with FAP as a distinctive tumor. A total of 44 cases have been documented so far (See Table 1). We describe three cases, in two of which the patients have FAP. Case 2 was lost to follow-up.

Two cases were women in their 30's and the third was a 14 year old. The lesions ranged from 1.5 to 2 cm and were associated with several satellite nodules. There was no lymph node metastasis, capsular or vascular invasion. Our cases are similar to that described by Cameselle-Teijeiro et al. [2] who first proposed the term and did a study on nine cases. All the cases were seen in women between ages of 16-30 years (mean: 21.3). The lesions were predominantly solitary and ranged from 1.5-5.6 cm. All except one showed vascular invasion. Two cases also showed lymph node metastasis. In that study, immunohistochemical stains were positive for thyroglobulin, epithelial membrane antigen, cytokeratin, vimentin, estrogen and progesterone receptors, bcl-2 and Rb proteins. Calcitonin and carcinoembryonic antigen were negative. Follow-up showed seven cases with no recurrences.

C-MV of PTC is commonly seen in young females usually less than 30 years of age. The lesions are encapsulated or well-circumscribed. While sporadic forms usually appear as an isolated tumors, the cases associated with FAP are often multifocal due to different somatic mutations added to the germline mutations [3]. They display the characteristic histologic pattern of cribriforming akin that seen in breast cancer with morules. Morules appear squamous with no keratinization or cellular bridges. There are also follicles showing papillary, trabecular and solid patterns.

There have been several cases showing germline mutations in the APC gene which have also been found in the colonic polyps. Hot spots on codons 1061, 1039 and 698 of the APC gene on exon 15 are frequently identified. It has been proposed that β-catenin immunohistochemistry is a feasible screening method to identify occult FAP in young patients with thyroid tumors [4]. Recently Xu B [5] suggested that accumulation of mutant β-catenin contributes to the development of C-MV of PTC. A handful of sporadic cases have also been documented [6]. Table 1 summarizes all the cases in the literature. Molecular studies were performed in all our cases and they did not show the hot spots of the APC gene.

This morphologic variant should be borne in mind by pathologists because of its characteristic pattern. The clinician should be alerted to exclude FAP along with appropriate family screening. In 25-30% of cases, this might provide the first indicator of an underlying FAP syndrome.

5. Xu B. et al. Cribriform-morular variant of papillary thyroid carcinoma: a pathological and molecular genetic study with evidence of frequent somatic mutations in exon 3 of the beta-catenin gene. J Pathol. 2003 ;1 :58 -67

6. Cameselle-Teijeiro J. et al. Somatic but not germline mutation of the APC gene in a case of cribriform-morular variant of papillary thyroid carcinoma. Am J Clin Pathol. 2001 ;115 :486 -493 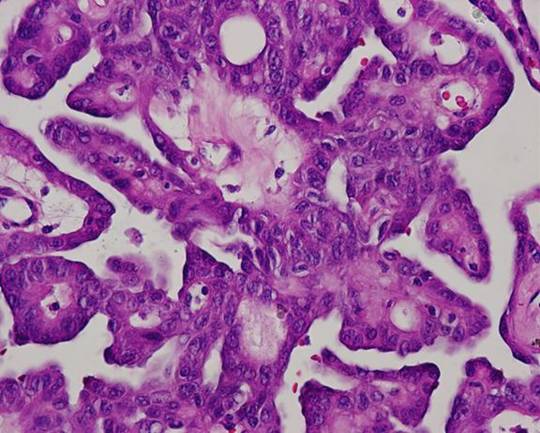 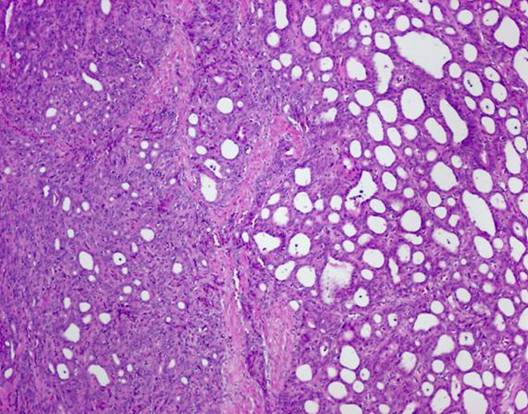 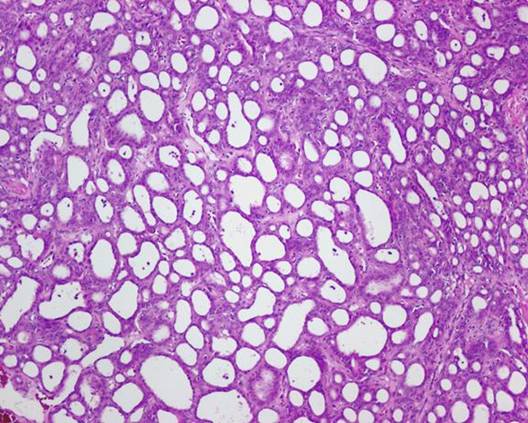 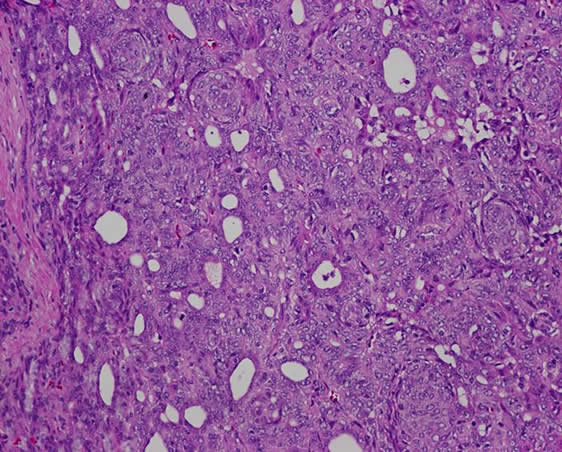 Shylashree Chikkamuniyappa, MD, is a final year Anatomic/Clinical pathology resident at Univ TX Hlth Sci Ctr at San Antonio. She is serving as the Chief resident in the department and serving on various institutional and national committees. She is currently working on several research projects with faculty and presented at national meetings. She will pursue her fellowship in hematopathology for the next 2 years.

Jaishree Jagirdar, MD, is the Professor and Director of Anatomic Pathology at the Uni Tx Hlth Sci Ctr at San Antonio. After completing her residency in AP/CP at Mt. Sinai Medical Center in New York, she stayed on as faculty for 10 years. Following that she worked at New York University for another 11 years. Her area of expertise is in Pulmonary Pathology, both diagnostic and research aspects. She is the Hlth Sci Ctr Pulmonary Pathology Consultant and has published primarily on lung diseases for the last 20 years.